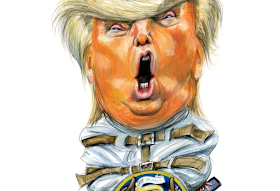 Rolling Stone ran an article by Matt Taibbi called, "The Madness of Donald Trump," accompanied with this artwork by Victor Juhasz.

Trump's mental health and cognitive capacity is the subject of much speculation, joke-making, and earnest concern. But how should the subject be approached by the media?

On this week's episode of Citations Needed, we explore the ethics of diagnosing mental health from afar, the conflation of mental health issues with moral turpitude, the negative effects of the media's nonstop stigmatizing of "insanity," and how to balance all of the above in the face of the undeniable and unique threat to the planet posed by the American president.

Dr. Dean Burnett is a doctor of neuroscience, and moonlights as a comedy writer and stand-up comedian. He lectures at Cardiff University and is also the author of The Idiot Brain.

s.e. smith is a writer, agitator, and commentator based in Northern California, with a journalistic focus on social issues, particularly gender, prison reform, disability rights, environmental justice, queerness, class, and the intersections thereof.