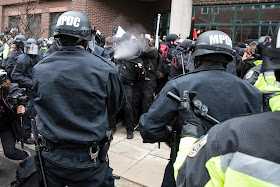 In the wake of Trump’s unexpected win, the “Resistance” to Trump displayed by many in liberal media has been a toxic combination of gratuitous smears of left activists and ignoring their existence altogether. As over 200 people — including several journalists — face decades in prison for being in the proximity of window-breaking the day of Trump’s inauguration, the silence from those nominally charged with opposing Trump is deafening.

If you can donate to the #J20 legal defense fund, do it here.

Sam Menefee-Libey is a longtime grassroots organizer and trainer with experience working on a broad spectrum of economic and social justice issues, including anti-oppression, education and environmental justice. Sam is currently a member of the Dead City Legal Posse, working on behalf of #J20 arrestees.

***
Citations Needed is available on iTunes, Soundcloud and LibSyn (here’s the RSS feed). You can also check us out on Twitter and Facebook.

Citations Needed is produced by Florence Barrau-Adams. Our theme song is ‘Nonphenomenal Lineage’ by Grandaddy.