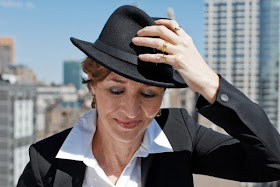 A couple of weeks ago, I wrote a post addressing the myriad falsehoods and inaccuracies proffered by influential think tank head and former Obama official Anne-Marie Slaughter in an August 20 op-ed she wrote for USA Today about the multilateral nuclear agreement reached between Iran and six world powers this summer in Vienna.

During the course of her column, Slaughter gets some very basic facts about the Iranian nuclear program, the history of negotiations, and the deal itself totally wrong. For instance, she claims the deal "completely dismantles its nuclear supply chain." It doesn't. She calls the Iranian nuclear program - the one fully safeguarded and monitored by the International Atomic Energy Agency - "illegal." It is not.

Alas, despite my (and others) efforts to force this to Slaughter's attention and get her to respond, she didn't.

First came the obvious "I'm busy" stuff, but soon thereafter came the full admission of error about her "stockpiled plutonium and highly enriched uranium" claim. Apparently, explains Slaughter in lieu of actually owning up to being dead wrong, she was "writing 2 quickly" and "didn't mean 2 say stockpiles of plutonium."

How someone accidentally writes and publishes something they claim to know isn't true is beyond me. But, amazingly, what she tweeted after that is even more damning.

.@KayvonAfshari @USATODAY @WideAsleepNima I agree that it deserves a response but have hands completely full getting a kid to college cont'd
— Anne-Marie Slaughter (@SlaughterAM) September 13, 2015

.@WideAsleepNima @KayvonAfshari @AliAbunimah so not a lot of nuance. Deal is very important for US, Iran, and region, including possibility
— Anne-Marie Slaughter (@SlaughterAM) September 13, 2015

.@WideAsleepNima @KayvonAfshari @AliAbunimah of ever stopping the horrors in Syria. Will not be able to engage further, sorry!
— Anne-Marie Slaughter (@SlaughterAM) September 13, 2015

According to Ms. Slaughter, who has been a professor and department chair at elite academic institutions, served as a top aide to the Secretary of State, and now runs a major D.C. think tank, "writing for [a] mass audience" means ignoring the truth, or what she refers to for some reason as omitting "nuance."

First off, facts aren't nuance. They are facts. Iran not having stockpiles of weapons-grade fissile material is not some bit of inane minutiae when one has decided to argue that Iran is a potential nuclear-armed threat. No, falsely claiming the opposite is an integral part of your overall argument and it is erroneous information upon which less informed or interested readers (yes, the "mass audience") will base their own judgments on the matter. If your facts are wrong, and you're supposed to be the "expert," then how are we to expect the non-experts to know what the truth is?

Which brings us to the second thing: Anne-Marie Slaughter clearly isn't concerned about the truth. She's concerned about making her case in support of the Iran deal, and still sounding tough on the Iranian bogeyman, regardless of what she needs to pretend is true to do it.

This is exactly why most people are so poorly-informed about Iran's nuclear program and why faulty assumptions lead, not only to warmongering and threats, but to bad policy.

.@WideAsleepNima I take the point. But op eds are v short & I was trying to frame core debate.
— Anne-Marie Slaughter (@SlaughterAM) September 14, 2015

But, hey, for Anne-Marie Slaughter, she only had so much room to "frame [the] core debate," which clearly doesn't leave any space for telling the truth about things. I mean, writing "low enriched uranium" takes up far more space than "plutonium and highly enriched uranium," right?

Slaughter only addressed that one mistake, however, ignoring the other obvious errors published in her op-ed.

When asked whether she would contact USA Today and ask them to issue a correction on her article about the "stockpiles" claim, Slaughter demured:

@KayvonAfshari @WideAsleepNima it's over a month ago! Don't think it does much, though I do understand the concern
— Anne-Marie Slaughter (@SlaughterAM) September 15, 2015

Besides the fact that September 15 is not "over a month" after August 20, Slaughter is apparently uninterested in setting the record straight and believes her commentary, published in USA Today, has an extremely short shelf-life of relevance. Why correct my mistakes when the damage is already done?

Such is the emphasis on truth and the importance of honesty in the mainstream commentariat. After all, if the "mass audience" doesn't know they're being lied to by Very Important People like Anne-Marie Slaughter, why would she let them find out? I mean, hey, she's got a kid to bring to college and a book to promote!

Reflecting on how tragically wrong she and other supporters of the Bush administration's invasion of Iraq were about what they claimed they knew was true, Slaughter wrote in 2013, "We can only hope we have gained a lesson in humility."

Sadly enough, that lesson, for Slaughter herself, appears yet unlearned.