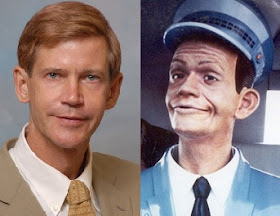 WINEP's Patrick Clawson (left), and his doppelgänger "Johnny Cab" from Total Recall (1990)
Something unexpected and hilarious happened yesterday during Dick Cheney's predictably bellicose and apocalyptic speech against the Iran deal at the American Enterprise Institute.

When a Code Pink protester named Michaela Anang interrupted the speech, raising a banner reading, "Cheney / Wrong on Iraq / Wrong on Iran," and calling the war criminal at the podium, well, a "war criminal," someone in the audience freaked the fuck out.

While Anang was surrounded by event security escorting her out of the room, a bespectacled man wearing a suit and tie appeared and grabbed her banner, attempting to tear it out of her hands in a fit of flailing fury. He was not successful.


The man tried and tried some more, but he couldn't quite wrest the sign from the woman's grasp. He jerked with his entire body. He yanked the banner back and forth like a dog playing tug of war. He even leaned back in an apparent attempt to use his body weight to his advantage. All to no avail.

After pulling with all his middle-aged might (for her part, Anang looked like she exerted no energy whatsoever during this entire ordeal), the banner slipped from the man's grasp, and he slumped backwards into an empty chair off the aisle - drained, defeated and denied.

The video of the struggle is priceless:


So who was this guy - this irate, ineffectual, noodle-armed muppet?

It was none other than Patrick Clawson, research director at the Washington Institute for Near East Policy (WINEP), a fanatically pro-Israel think tank spun off from AIPAC. Clawson has long been a staple of the Beltway's Iran hawk mafia.

In 2006, Clawson told a Senate Foreign Relations Committee hearing, "So long as Iran has an Islamic Republic, it will have a nuclear weapons program, at least clandestinely. The key issue therefore is: How long will the present Iranian regime last?"

He has frequently called for supporting regime change in Iran, just as he supports industrial sabotage of Iran's nuclear infrastructure, cyber attacks, and the extrajudicial murder of Iranian nuclear scientists. "That's what the Israelis would do, what we would expect them to do. They would kill Iranian scientists," he said in 2009, adding, "It would be implausible to call off all covert ops."

Clawson also has the distinction of publicly suggesting Israel conduct a false flag operation to drag the United States into a war with Iran as an alternative to diplomacy. "I frankly think that crisis initiation is really tough. And it's very hard for me to see how the United States … uh … [the] president can get us to war with Iran," Clawson said during a 2012 WINEP forum entitled, "How to Build U.S.-Israeli Coordination on Preventing an Iranian Nuclear Breakout."

"So, if in fact the Iranians aren't going to compromise, it would be best if somebody else started the war," Clawson concluded.

For Clawson, it surely would have been best if he had asked somebody else to wrestle a young woman's banner from her fingers.

Journalists Jim Lobe and Ali Gharib have written a phenomenal analysis of the incident, positing that, metaphorically, it pretty much sums up the Israel lobby's embarrassing failure to kill the Iran deal, despite its expenditure of untold energy and capital. Clawson embodies the lobby's crazed hysteria as much as its feeble weakness.