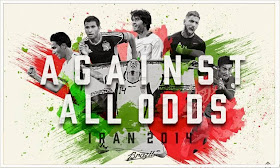 Attempting to navigate a field of international rivals, under close scrutiny on a world stage, and achieve multilateral recognition before the window of opportunity closes in mid-July, top-level representatives of the Islamic Republic of Iran have their work cut out for them this summer. While hopes for a positive outcome have waned of late, there is still time to turn things around.

This is not about the nuclear negotiations that continue apace in Vienna. No, I'm referring, of course, to Team Melli, the Iranian national soccer team, and their performance in the 2014 FIFA World Cup.

Following a lackluster outing against Nigeria this past week - which ended in a disappointing 0-0 draw, Iran faces by far its toughest competition Saturday afternoon at the Estádio Mineirão in Belo Horizonte, Brazil: the South American powerhouse and Group F favorite, Argentina.

The two teams have not met on the soccer pitch since a friendly match in Madrid back in 1977 which ended in a 1-1 tie. Here’s what Team Melli’s starting eleven looked like then: 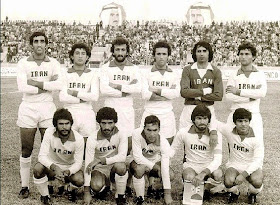 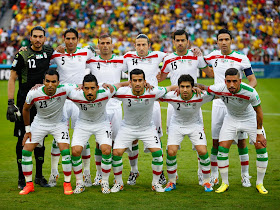 Team Melli has heart and some solid defense, but crucially lacks a strong offense and, more importantly, vital funding. It has been announced already that Carlos Queiroz will step down as Iran's coach following the World Cup due to "a lack of government financial backing."

"Yes my connection will finish here at the World Cup," Queiroz told the press. "There was not support from the government - there has stopped being a genuine interest because of the financial situation."

A number of recent reports have told the tale of an under-supported and under-appreciated national team suffering from an Iranian economy ravaged by international sanctions.

Last week in Foreign Policy, John Duerden reported, "The Iranian Football Federation (IFF), the body that oversees all football activity in the country, has struggled to collect funds owed to it by international organizations due to a ban on financial transactions that were part of a tightened sanctions imposed by the EU and the United States in February 2012, which included expelling Iranian financial institutions from SWIFT, a global international banking system."

Queiroz, who coached the Portuguese national team in the 2010 World Cup, has long been frustrated with the dearth of resources. "Those who think Iran's national team will be successful with only 14 days of preparation, are either crazy or are living in Disneyland," he said in May.

This aggravation and embarrassment is shared by his players. "None of the promises turned into realities," Iran's captain Javad Nekounam told The National in May. "If we did not have good preparation games until the games start, there shouldn't be any expectations. Whatever happens, the authorities must be held responsible for the results."


The Iranian Football Federation opted to order cheap, poor quality kits, and the federation’s president, Ali Kafashian, was reported to have told the players to wash them in cold water to avoid shrinkage. He also told players not to exchange shirts with opponents in Brazil, a common gesture of sportsmanship, as they do not have enough, Iranian media reported.

The lack of money has similarly led to the cancellation of training camps and a failure to schedule important friendly matches in advance of the big dance. Iran only faced low-ranked teams such as Guinea, Belarus, and Montenegro before traveling to the Brazil this month, despite being Asia's best team and current champion. A 2-0 win over Trinidad and Tobago in Sao Paulo nevertheless boosted spirits before the World Cup kickoff.

Now it's time for Team Melli to square off against Argentina and the brilliant Lionel Messi. A daunting task, for sure, but Iranians aren't known for being easily intimidated.

"It's the biggest game in the history of Iranian football," Queiroz told the Associated Press. "We have never played against such an outstanding team as Argentina. The players wouldn't change this for the world."

He added, "I tell my boys, 'Try to find the net on the opposite side and when we have the ball, we go straight to them.'"


As Costa Rica, Uruguay, and Chile have already proven, the World Cup is a time for upsets.

Your Middle East contributor Alborz Habibi has compiled a handy compendium of reasons to root for the Iranian underdogs, citing Team Melli's attractive squad, its ethnic and cultural diversity, and environmental awareness and advocacy, among others.

While a trip to the knockout round may be a long shot, wishful thinking and a little faith go a long way. As diplomats work tirelessly in Vienna to end three-and-a-half decades of enmity between the United States and Iran, can history also be made on the pitch at Belo Horizonte?

"Nothing is certain," notes Queiroz. "That's the beauty of this World Cup."

It is indeed a beautiful game, and, with a stockpile of hope enriched with a heap of luck, there may yet be beautiful horizons ahead.