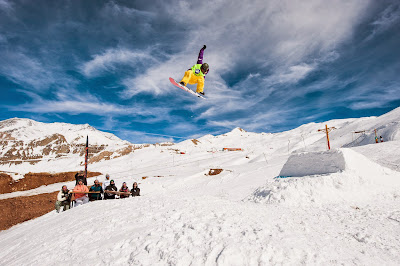 Earlier this month, a freak sandstorm swept through Tehran, effectively shutting down the metropolis and tragically taking the lives of at least five people. Such an event might not seem like such an anomaly to those whose conception of Iran’s landscape resembles Lawrence of Arabia rather than reality. This past February, Tehran also experienced the largest snowfall the city had seen in half a century, with temperatures dipping to 19 degrees and seven feet of snow blanketing the ground.

From snow-capped mountains and subtropical woodlands in the north to the arid central plain and lowland marshes of the southwest, Iran boasts a dazzling diversity of climates and ecosystems. Stretching from the Caspian Sea to the Persian Gulf, Iran is home to sandy beaches, the Great Salt Desert, a rainforest, and often – according to NASA – the single hottest place on Earth.

In March 2013, Swiss skier Arnaud Cottet and snowboarder Benoît Goncerut embarked on a winter sport, multimedia trip called the Timelapse Project. “After an adventurous journey through Croatia, Bosnia, Bulgaria, Greece and Turkey, they ended up discovering – beyond all expectations – a lively community driven both by passion and freestyle in the high valleys north of Tehran, the Iranian capital,” states their website, We Ride in Iran. Cottet and Goncerut began traveling back to Iran frequently, establishing not only “strong and spontaneous ties of friendship” but also eventually “a series of cultural, social and cinematic projects leading up to the planning of freestyle competitions with organized efforts for the development of the freestyle culture.”

This past March, after spending the winter “busily shaping the Dizin snowpark, coaching the Iranian future of freestyle snowboarding and skiing, and organizing the freestyle competitions,” Cottet, Goncerut, and their friend Nikola Sanz, celebrated their final day in the country with an outing to the ski resort of Tochal. The day trip was documented in a short video entitled, “One Day in Tehran,” and debuted in late May. Watch it here:

Kamal Zargar, an Ahvaz native raised in California, shot the video, “Soul of the South,” in Khuzestan, the oil-rich, southwestern province bordering Iraq and the Persian Gulf. He writes:


This video highlights the contemporary culture and localities of Khuzestan, which, although have remained rooted in tradition, have also adapted to modern ways – a phenomenon common throughout much of Iran. Footage of the sights, sounds, food, and music were taken in Ahvaz, Abadan, Shush, and Shushtar, cities all located in Western Khuzestan. Not long ago, these cities were towns and villages; but, as many cities throughout the country have grown exponentially, so have those in Khuzestan, sprawling further out into the desert plain in the south, and the hills and mountains in the north.

It’s a beautiful look at a region where the ancient and modern effortlessly intertwine, steeped in “geographic, demographic, and cultural diversity.” Check it out: