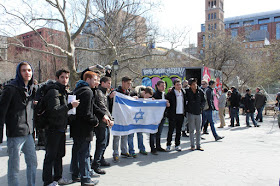 A mock bomb shelter was set up in Washington Square Park Monday afternoon by a number of local Zionist groups in an attempt to demonstrate the terrorized lives of innocent Israelis living under the menacing specter of Palestinian rocket attacks (with no mention ever made of ethnic cleansing, collective punishment, military occupation, illegal blockade, or constant F16, drone, and Apache air strikes, of course). I attended the multi-media installation, which was produced in conjunction with a few New York graffiti artists with connections to the Zionist outfits, and had some lengthy talks with a number of Israel-supporters. Though definitely frustrating, the conversations were by and large calm and non-combative.*

The single most repeated statement I heard from the young Zionists was: "Israel has shown unprecedented restraint and has never ever targeted civilians." Any mention of the Goldstone Report and its findings, along with all other presentation of the basic facts of the occupation, Israeli/Palestinian history, or Israeli military protocol (such as the Dahiya Doctrine, for example) was met with incredulity and dismissed with a scoff.

"War is hell" was another repeated message, along with the notion that, since Jews had successfully "conquered" the land, it was theirs to do with as they wished. The loss and denial of Palestinian sovereignty and self-determination was all a "sad fact of history." No mention of international law, Geneva Conventions or otherwise, swayed anyone's thinking.

I also heard that "at some point or another in history, everyone has been occupied and oppressed," which was said as a way to justify the suffering of the Palestinians without any hint of remorse or empathy. When the Holocaust was brought up in an effort to make an analogy about human suffering, ethnic cleansing, and military aggression (as well as resistance with regard to the Warsaw Ghetto), the young Zionists refused to accept the comparison. "It's totally different," they said.