On Gaza, a Yeshiva, and the Opening Shots of the Third Intifada 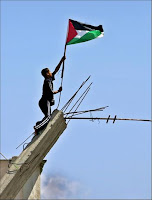 This past week, the world has certainly seen a severe and horrific escalation of violence and brutality in Palestine/Israel. What is most striking to me, though, is how differently the news media reports Israeli deaths in contrast to Palestinian deaths. It should go without saying that any type of murder, from military incursion to machine gun and sniper fire to rubber bullets to air raid bombings to rocket fire to deliberate starvation to suicide attacks and so on, is terrible and deserves international condemnation. The killing of children, women, and men is always a tragedy, whenever and wherever it occurs. What should also been acknowledged, I think, is that certain lives are not more precious than others, despite what the media may lead you to believe.

Last weekend, over 130 Palestinians, about a quarter of whom were children, were killed by Israeli Occupation Force operations in Gaza and finding any real news coverage about it from the mainstream news outlets proved oddly difficult. Later in the week, it appeared that only British news sources even reported on the recent findings that living conditions in Gaza itself has reached a 40-year low, the worst since Israel first occupied the territory in 1967. Then yesterday, a gunman killed eight Israeli students at a school in West Jerusalem and the story has blanketed the network, cable, radio, and print news sources ever since - with big, sprawling headlines rife with cries of "terror" and "carnage" and "savage attack." Stating that 130 versus 8 is worse isn't the point. Any single death is awful. As citizens of the world, we should all agree on that. But what should not be ignored, and all too often has been and continues to be, is the fact that Palestinians and Israelis do not live their lives on an equal footing, these are not two even sides that both engage in hostile and violent exchanges, each claiming self-defense and a right to exist. Palestine is an occupied territory. It is occupied by the Israeli army and has been for over forty years. (The actual existence of "Israel" for almost sixty years is another topic altogether, but would only serve to further my point.) Palestinians are currently a population of open-air prison inmates, subject to the will, disdain, discrimination, and violence of the Israeli government and military. To argue that "militants" targeting civilians is more devious and nastier than a uniformed army firing sophisticated missiles into civilian neighborhoods of a besieged and starving refugee camp reveals a bias that is rampant and common in this country today.

As Ali Abunimah, so succinctly puts it,

The fallacy that lies behind the differential concern for the lives of innocent Israelis and Palestinians is that the massacre in Jerusalem and the massacres in Gaza can be separated. Israeli deaths are "terrorism," while Palestinian deaths are merely an unfortunate consequence of the fight against "terrorism." But the two are intricately linked, and what happened in Jerusalem is a direct consequence of what Israel has been doing to the Palestinians for decades. 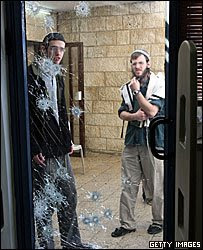 What is most unfortunate, besides the tragic loss of life, about the recent events at the Mercaz Harav seminary is that, not only will it serve to justify more horrendous attacks by Israel upon Palestinians, but it may wind up being used as a justification for Israel's militaristic society as a whole. The school itself, located in the Kiryat Moshe quarter of Jerusalem, demonstrates the melding of Israeli nationalism and the Jewish religion than furthers the rampant militarism of Zionist ideals, under the guise of patriotism and piety. The gunman responsible for the eight Israeli deaths yesterday was himself gunned down by students at the school. The fact that students themselves were carrying weapons at a religious seminary speaks to how deep the Zionist synergy of Judaism and soldiery permeates, and quite possibly defines, Israeli society.

(Incidentally, an Arab professor at Sapir College in Sderot was recently dismissed from his job for requesting that a student - who also serves in the Israeli military - not bring his gun to and refrain from wearing his uniform in his class. The situation caused such an uproar that the college president, Zeev Tzahor, wrote to the professor demanding an apology, in which "you must refer to your obligation to be respectful to the IDF uniform and the full right of every student to enter your classroom in uniform." When Prof. Hassan refused to meet this demand due to his view that all uniforms, be they Israeli, Fatah or Hamas, are symbols of violence and therefore not welcome in his classroom, the college began proceedings to dismiss him. You can read all about this in Jonathan Cook's article, Academic Freedom? Not for Arabs in Israel.)

Another important piece of information to note is that the Mercaz Harav seminary stands at the very center of the Zionist ideological movement. BBC Middle East editor Jeremy Bowen reports that "the school is at the heart of the settler movement in the occupied West Bank [which] may have been the reason why it was targeted. Many of its students are on special courses that combine religious study with service in combat units in the Israeli army."

Judith Norman of Jewish Peace News cogently and concisely articulates the tragedy and context of these recent events:

As has been widely reported, a gunman in Jerusalem opened fire at the Mercaz Harav yeshiva yesterday, killing 8 students (most of them children) and wounding at least 9. At a time like this, there are two different sets responsibilities to the victims: one is to mourn the brutal deaths of these boys and young men. At the same time, we need to work to prevent this sort of thing from happening again, which requires us to understand the context in which this act of terrorism occurred. Failing to understand this atrocity within the overall context of the occupation reinforces the right-wing line that Palestinian violence is motivated simply by anti-Semitism, blood hatred, or Biblical feuds.

Although the gunman’s specific motives are unclear, this killing comes at a moment that the New York Times somewhat delicately describes as a time of “tension”. Israel’s latest attack on Gaza has left over 130 Palestinians dead, half of them civilians. Just yesterday, a 20 day-old infant was buried after being shot in the head by Israeli soldiers. Another contextualizing factor is the nature of the yeshiva where the attack took place, a key institution in the militant settlers’ movement, which has been stealing land from Palestinians in the occupied territories for decades, believing God intended the land for Jews.

These horrific killings are utterly unjustifiable, and Hamas’ praise for the operation is both contemptible and chilling. It is important not to let this sort illegitimate act of terrorist violence obscure the legitimate and urgent grievances of the Palestinian people under occupation and in exile. It is vital to keep this in mind, because whatever the specific motivations of the gunman might have been, terrorist violence like this is almost always a symptom of Israel’s expansionist policies and is unlikely to end until the occupation is over.

In conjunction with George Bush's declaration of a new 'peace process' and the promise of a lasting solution by the end of this year, it appears that 2008 may in fact be a year of increased bloodshed and the further destruction of hope for both Palestinians and Israelis. Justice is a rare commodity in a supposed struggle for existence and security and a rise in violence and vengeance will see a corresponding decrease in rationality, sympathy, and understanding. The occupation will intensify and become more brutal and dehumanizing, a besieged and displaced people will suffer more than they already have, a resistance movement will grow and gain momentum through both violent and non-violent acts, a deeply militarized and colonial culture will feel victimized and seek revenge by excessive force. Animosity will solidify and future generations of both sides will continue to learn hate and distrust. Hundreds, if not, thousands more will die. And still there will be no justice, no peace, and no hope. A mutually declared and enforced ceasefire is the very first step of a very difficult process of ending the occupation. As long as Israel continues to infiltrate the Occupied Territories, killing dozens of men, women, and children, the Palestinian resistance will not stop fighting, nor should it. One of these sides has the full and unconditional backing of the world's most dominant and destructive superpower, the other doesn't isn't allowed to control its own water supply. One side feels victimized by history and has, in turn, been victimizing others for sixty years. A lot needs to change before Palestine will be free and Israelis will feel safe...and almost all of it is ideology, mostly in the form of religious colonialism and frustrated nationalism.

But in the meantime, let's not forgot, it is not Israel that is occupied, it is Palestine. This need not be about "us" or "them" (whomever you happen to identify with)...it's about everyone. And, at this rate, we're all going to lose.

For more insightful commentary and analysis, including information on the newly-leaked covert US government's plan to overthrow the legitimate Palestinian leadership and instigate a civil war, please read the following articles:

03.07.08 - A Defeated Policy, Not a Defeated People by Ali Abunimah, The Electronic Intifada

The Coalition Against the Gaza Siege
Press Release, March 7, 2008

Bloodshed does not compensate for bloodshed - Ceasefire Now!

The Coalition Against the Gaza Siege calls for an immediate end to the killing and violence, on both sides of the conflict. Bloodshed does not compensate for bloodshed, and revenge is no solution.

Any attack on, wounding or killing of unarmed civilians - as happened in the attack on the Merkaz HaRav Yeshiva as during the IDF attacks and bombings of Gaza and in the shooting of missiles at Sderot, Ashkelon and the Western Negev - must end forthwith.

It is the civilians on both sides who are exposed to harm and who pay the full price for the manoeuvres of the political and military leaderships. We call upon the leaderships, of both sides, including all organizations and parties, to cease all violence immediately.

We call upon the international community and the world public opinion to firmly demand an end to the mutual killing and bloodshed.

In order to achieve that, we call for a full and mutual ceasefire, as a first step negotiating an end to the occupation and an end to the conflict between the two peoples, to a full peace which is the only hope for our future.