Make War, Not Love:
A How-To Guide for Avoiding Impeachment 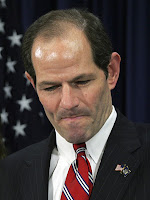 It is truly the evidence of a grim reality and the troubling state of our society when powerful, arrogant, and adulterous men face harsher scrutiny and penalties than those well-known and proven to be, not only the most corrupt, pathologically deceptive and imperialistic, but guilty of the very highest crimes and most treasonous misdemeanors in this nation's almost 232 years. The latter characters promote bigotry and fear, commit and encourage genocide, torture, and ethnic cleansing, and destroy the civil and human rights of millions of this world's citizens with impunity and without any sort of retribution, regret, or remorse. The former folks, the ones who cheat on their wives with overweight interns and high-priced hookers, are the ones who get impeached.

With the recent news of New York State governor Eliot Spitzer's ridiculously boneheaded indiscretions, especially in light of his past efforts to strengthen laws against prostitution with the added bonus of stiffening penalties (pun intended?) for the Johns involved in these escort rackets, the only question I can really raise is this:

Are we to believe that whenever someone with a high level of authority, be it say political or religious, rails adamantly against something, the real message is that he is actually guilty of that very thing he admonishes?

Let's see here: "I did not have sexual relations with that woman." Yes, indeed he did. People like Larry Craig and Ted Haggard, who notoriously and viciously lash out against homosexuals and same-sex marriage are, in fact, totally gay. Mark Foley, who fought aggressively against child abuse, molestation, and exploitation, was actually a big fan of pedophilia. Does this mean that soon we will all find out that Alan Dershowitz is actually Palestinian? Now, wouldn't that turn his ethnic-supremacist face red?

If the opposite is often true in regards to the passionate principles of many politicians, does that mean that when George Bush speaks of the 'War on Terror,' he's really aware that he has been waging a war of terror?

Spitzer was warned by New York Assembly Republican Minority Leader James Tedisco, earlier this week, that "If he does not resign within the next 24 to 48 hours, we will prepare articles of impeachment to remove him." And Spitzer resigned today, effective Monday March 17th. These threats of impeachment against a man who betrayed the trust of his family and community by paying (a whole heap of money) for sex, or the actual impeachment process over a sitting president lying about getting a blowjob, seem to signal one thing in American politics: The fist-pumping, hoarse-throated calls for impeachment and resignation are apparently reserved for adulterous and secretive sexual acts committed by elected politicians.

We can put things in official Clue terms to see what's really going on here:

NY Governor in DC hotel room with a hooker.

US President in Iraq with an illegal occupying army.

One of these actions is an impeachable offense. The other, it seems, isn't.

The Benefits of Decimation Over Copulation

This country has far more of a problem with the sexual behavior rather than the imperial behavior of its political leaders. Apparently being a member of the Emperor's Club VIP is an offense too great to recover from, whereas actually attempting to be an emperor isn't really that bad. Lying a country into an illegal and immoral invasion and occupation that, a week from today, will enter its sixth year isn't impeachable. Banging "Kristen," the prostitution agency's "petite, pretty brunette," for $4,300 during a trip to Washington DC on February 13th is impeachable. And yet, throughout all this, impeachment proceedings are nowhere close to being discussed for Dick Cheney and the other architects of the imperialism and genocide committed by this country and the utter destruction of the Constitution over the past seven years by anyone other than perhaps Congressman Robert Wexler.

Obama, Clinton, and McCain can travel around the country talking about maintaining a substantial troop presence (of varying, however minor, degrees depending on who's speaking) in Iraq, praising the past and ensuring the future decimation of Afghanistan, all with the twinkling-eyed and tittering excitement of a potential bombing of Iran. Obama, our supposed 'anti-war' candidate is the one advocating the redistribution of military personnel from Iraq to Afghanistan and has oft-repeated his belief that the invasion of Afghanistan was, in fact, a rational and just decision. None of the three remaining candidates has said, unequivocally, that s/he will refuse to engage militarily with Iran and all have maintained that "all options remain on the table." But when pressed on his own views about the impeachment of Bush and Cheney, Obama stated that impeachment in their case is 'unacceptable.' He elaborated,

"I think you reserve impeachment for grave, grave breaches, and intentional breaches of the president's authority."

Did I miss something in the past seven years? Proven lies, countless scandals, the gross neglect of an entire US city's population after a natural disaster, obstructing justice, sanctioning torture, illegal spying, bombing, invading, and occupying, murdering, fear-mongering, committing grievous war crimes, and threatening to do it all over again apparently aren't enough to be deemed 'breaches of executive authority,' according to someone running for the position of having that exact same authority? Sounds great, at least we'll know what to expect from the new guard.

Basically, in this glorious nation we call home (whilst trying our best to keep the bile from rising up our gullets as we do so), it is perfectly clear that getting laid by a hooker is worse, far worse, than getting paid by Halliburton. American society must be so desensitized to violence, that waging war on foreigners isn't seen as that big a deal. But extra-marital affairs?! Oh heavens no! Not from someone we're supposed to respect! How dare he! Why couldn't he just be a good boy and murder some Muslims?

No one dies when Eliot Spitzer makes a bad decision to call an escort service. It is a personal tragedy for him and his family, a real way to ruin a good life. But the bad decisions, the aggressive policies, and the active crusades of this past administration have affected the lives of millions, if not billions, of people on this planet and have directly and deliberately killed, wounded, displaced, and destroyed millions more. The obliteration of two countries and continued annihilation of human lives and the destruction of entire families, all due to illegal invasions, seems to me to be a much more punishable offense. If only George Bush had fucked a whore while on one of his alcohol-fueled cocaine binges of yore, this world might just be a safer place today.

Alas, it seems that too much time is spent scrutinizing other people's handjobs and not enough time examining each other's bloody palms.