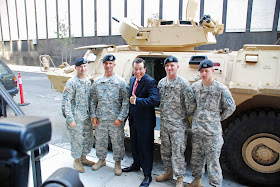 Fighting against the far right forces of the Republican Party and their auxiliary white supremacist media makes attempts to appropriate notions of nationalism into a liberal mold a compelling short cut for Democrats looking for easy clapbacks and viral RTs. The temptation to promote a kinder, gentler, "woke" patriotism is understandable.

But what is the collateral damage of this approach? From the justifiably horrified response to mass shootings to the jingoistic worship of all things military, what is the long-term downside of lifting up #VetsForGunControl and retired military brass as a counter to the vulgarity of Trumpism? Can the Left – including liberals – embrace a more holistic and anti-imperialist moral grammar that avoids short cuts and rejects the idea of nationalism altogether?


We are joined by Maggie Martin, co-director of About Face.

Maggie Martin is co-director of About Face (formerly Iraq Veterans Against the War). During her time in the U.S. Army from 2001-2006, she was deployed three times to Kuwait and Iraq. Martin left the army as a Sergeant in 2006.