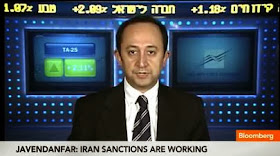 If you constantly call yourself an expert, you should probably do your best to know what you're talking about. Or at least read the content of links you provide to try and support your analysis.

This seemingly obvious concept has again proven itself beyond the capacity of one of the Western media's most favored bearer of conventional wisdom and hackneyed talking points.

In a short blog post on January 23, 2014, Meir Javedanfar correctly disagrees with a recent bizarre claim by CNN's Fareed Zakaria that the interim deal between Iran and six world powers is a "train wreck."

Following an interview with Iranian President Hassan Rouhani on the sidelines of the World Economic Forum in Davos, Switzerland, Zakaria stated that the Iranian and American understanding of what is required and necessary under the deal "are miles apart." The main reason for Zakaria's analysis? Rouhani told him that "not under any circumstances" would Iran destroy or dismantle any of its centrifuges used for uranium enrichment.

Explaining that Iran's right to peaceful nuclear technology is non-negotiable, Rouhani told Zakaria that the enrichment process is "part and parcel of the inalienable rights of states."

"It is part of our national pride, and nuclear technology has become indigenous," he said. "And recently, we have managed to secure very considerable prowess with regards to the fabrication of centrifuges," he added. "So, in the context of nuclear technology, particularly of research and development and peaceful nuclear technology, we will not accept any limitations."

Zakaria sees this as beyond the scope of what he thinks Iran will eventually be allowed to do as part of a final agreement over its nuclear program (as if international law or the NPT dictates that sovereign states relinquish their guaranteed national rights at the behest of adversarial states - it doesn't).

Javedanfar is - again - correct in disputing Zakaria's premature handwringing. But the reason why he disagrees is curious. He believes Rouhani will wind up eating his words, and that Iran will inevitably destroy aspects of its enrichment program, namely thousands of centrifuges.

Of course, Javedanfar is entitled to his opinion and theoretically could be correct in the long run (though I doubt it). But the rationale he provides is based on a false premise.

He writes, "I have lost count of the number of times that Iranian regime and Iranian government officials have stated in the past that Iran would never cease enrichment at any level, be it temporary or permanent," before providing four hyperlinks - which he calls "examples" - to directly support this claim.

Beyond oddly differentiating between officials of the "Iranian regime" and "Iranian government," Javedanfar appears to have done a quick web search for articles with headlines about Iran refusing to stop enrichment, but it seems he didn't actually read them before linking to them in his post. Only one of the news article he presents actually backs up his claim at all.

Remember, Javedanfar's claim is that Iranian officials have refused in the past to halt enrichment "at any level, be it temporary or permanent."

The first link he points to as proof leads to Iran's PressTV, which quotes the chairman of the Iranian parliament's National Security and Foreign Policy Committee Alaeddin Boroujerdi as saying, "What is necessary for the Islamic Republic is that enrichment, as an undeniable national right, will be never stopped." Another link, which aggregates wire dispatches, includes a headline and off-hand reference to Iran refusing to halt enrichment, but includes no quote from Iranian officials about it or specifics about what kind of enrichment.

Under the deal signed in Geneva in late November 2013, Iran retains its enrichment capabilities and, while voluntarily agreeing to suspend enrichment to roughly 20%, continues to enrich to about 5%. Thus, Iran has not stopped its enrichment program.

Beyond this, not even the United States government believes that halting all uranium enrichment in Iran is a viable outcome to the current talks anymore. That demand - institutionalized under the George W. Bush administration and now maintained by those who are eager to launch a military attack on Iran - is not an option.

Another one of Javedanfar's cited links, from China's Xinhua outlet, explicitly contradicts Javedanfar's claim. It quotes Iran's nuclear chief negotiator Abbas Araqchi insisting in October 2013 that, while Iran will neither cease uranium enrichment nor ship its existing stockpile out of the country, the scope of its enrichment activities are subject to discussion. "Of course, we will negotiate over the level and the volume of enrichment," Araqchi says.

Wait, wasn't this link supposed to provide evidence for Javedanfar's claim that Iranians officials routinely insist that "Iran would never cease enrichment at any level, be it temporary or permanent"?

The fourth link does seem to align with Javedanfar's allegation. The December 2012 Reuters dispatch quotes Fereydoun Abbasi-Davani, then head of Iran's Atomic Energy Organization (AEOI), saying that Iran "will not suspend 20 percent uranium enrichment because of the demands of others."

While one could argue that Iran's decision to voluntarily suspend 20% enrichment in the November 2013 accord was not based on "the demands of others" (but rather a confidence-building measure undertaken voluntarily by Iran as sign of good faith) or that Abbasi-Davani - who was succeeded as AEOI chief by Ali Akbar Salehi upon Rouhani's inauguration in August 2013 - was speaking out of turn, the point is basically made, albeit weakly.

So, only one out of four links, then, supports Javedanfar's main point.

But there's a larger error here, one that Javedanfar has long made.

Last year, Javedanfar erroneously claimed that "prior to the EU oil sanctions announcement (in January 2012), the Iranian government had refused to even address its 20% enriched uranium process."
This statement simply isn't true, as Iranian officials had consistently offered to suspend or stop 20% enrichment since February 2010, when Iran first began enriching to that level.

At the time, Salehi (who was then AEOI head) repeatedly said that, if the United States were to allow Iran to acquire fuel for its medical research reactor in Tehran, "then we will stop the 20-percent enrichment." Over the next eighteen months, numerous other Iranian officials, including then-president Mahmoud Ahmadinejad, made similar - if not identical - proposals in public speeches and in the press.

The subsequent agreement to halt 20% enrichment in November 2013 (implemented on January 20, 2014), then, is nothing new and therefore not a reversal of official Iranian statements, despite what Javedanfar suggests.

Moreover, the claim that Iranian officials have long refused to limit domestic enrichment levels is so staggeringly incorrect it is a wonder Javedanfar could write such a thing.

For instance, the critical second phase of an official Iranian proposal to European powers in March 2005 called for the establishment of a "ceiling of enrichment at LEU level" and a "limitation of the extent of the program." Later that year, Iran reiterated the offer, again noting its willingness to cap its level of enrichment, set a "[l]imitation of the extent of the enrichment program to solely meet the contingency fuel requirements of Iran's power reactors," and agreeing to the "[i]mmediate conversion of all enriched Uranium to fuel rods to preclude even the technical possibility of further enrichment."

The following year, the offer to "[l]imit the enrichment of nuclear materials so that they are suitable for energy production but not for weaponry" was repeated.

"Iran should be judged by its actions and not its words," Javedanfar writes, echoing recent statements by White House spokesman Jay Carney. And he's right.

But shouldn't a prolific public commentator be judged on the accuracy of his analysis?