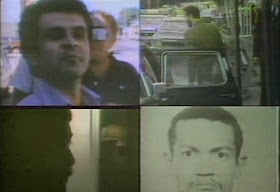 34 years ago this week - on November 4, 1979 to be precise - Iranian students seized control of the American Embassy in Tehran. Y'know, just like in Argo! Except not at all. Sigh.

Below are two reports from NBC Nightly News, one from the day the embassy was taken, the other from a year later, broadcast exactly 33 years ago today.

The second report, entitled "Iran's American Battleground," is a classic, pitting members of the California-based "Iran Free Army," described as "Iranian terrorists who oppose Khomeini" and "professional soldiers" and SAVAK agents of the deposed Shah's regime "determined to seek revenge against those who put them out of power" against American "Black Muslims" like Daoud Salahuddin, who, reporter Brian Ross claims, have ties to the pro-revolution Diaspora Iranians and are "promised safe havens in Iran for terrorist acts in this country."

"Authorities say both sides have brought a brand of Mideast terrorism to this country, well-financed, well-armed, with little regard for American law," the report declares and ending with a shadowy ex-member of the "Free Iran Army" telling NBC News, "For terrorism of Middle East, America is a paradise," words the U.S. press have lived by and politicians have exploited ever since.