Blood, Heat and Tears:
Why I Can't Root for Miami in the NBA Finals

Miami Heat head coach Eric Spoelstra, Lebron James, Dwayne Wade, Chris Bosh, and majority owner Micky Arison
Last week, The Nation's sports editor Dave Zirin presented a number of excellent arguments in favor of rooting against the Oklahoma City Thunder in favor of the Miami Heat in this year's NBA Finals. In justifiably painting a lurid and grotesque picture of right-wing Thunder owners Clay Bennett and Aubrey McClendon, who uprooted the Seattle SuperSonics and moved the team to Oklahoma City in collusion with NBA commissioner David Stern in order to maximize corporate profits, Zirin dubs Bennett and McClendon "the kinds of sports owners whose villainy should never be forgotten."

But while Zirin reveals the greed and chauvinism of the Oklahoma City back office, he mentions only the famous players of Miami - Lebron James, Dwayne Wade, and Chris Bosh - in his juxtaposition of the two competing franchises, omitting completely the Heat's own ownership from his critical lens.

Zirin is right: Clay Bennett and Aubrey McClendon are both odious big-money, politically despicable, homophobic, environment-ruining robber barons who have committed a grave crime against the people of the Emerald City.  But what he doesn't tell you is that the Miami Heat's ownership consists of some of the richest people on the planet who happen to be committed to providing the colonial infrastructure of Apartheid and promoting the ethnic cleansing of an indigenous population from their ancestral homeland.

The Miami Heat is largely an Israeli-owned organization. The Arison family, one of the wealthiest families in the world, has owned the team from its early years in the 1980s. Its patriarch, Ted Arison, was the son of Romanian settlers who, in 1882, helped (along with Baron Edmond James de Rothschild) to establish Zikhron Ya'akov, one of the first Jewish agricultural colonies in Palestine in the late nineteenth century. His father, Meir, was a multi-millionaire in his own right, owning the largest shipping company in Palestine under British Mandate. Ted served in the nascent Israeli army after the unilateral Israeli declaration of independence in 1948 that literally wiped Palestine off the map.

After relocating to the United States in the early 1950s and pursuing a number of different business ventures (some successful, others not), Arison eventually retired to Miami and founded Carnival Cruise Lines in 1972. Carnival is now the world's biggest and most lucrative cruise ship line in the world.

In 1990, Arison renounced his U.S. citizenship in an effort to avoid estate tax in the United States and returned to Israel to found Arison Investments. In 1997, he led a business consortium that purchased a controlling share in Israel's Bank Hapoalim for more than $1 billion, a deal that marked the largest privatization in Israel's history. Sadly, he died just nine months shy of being able to reap the benefits of his tax avoidance scheme.

Upon his death in 1999, Ted Arison was called "the world's wealthiest Jew" by the Bay Area's J. Weekly and described as "a natural ally and close friend of free-market champion Benjamin Netanyahu." Ehud Barak eulogized Arison, writing, "Arison's contribution shall be remembered for generations," while pre-coma "Likud leader Ariel Sharon mourned Arison as 'a precious human being, a proud Jew and Zionist, who connected his own lot with that of the state of Israel and the Jewish people in all walks of life.'"

The Arison Group, in addition to its Carnival and Miami Heat holdings, also owns the Israeli Shikun & Binui construction and real estate development behemoth which operates not only in Israel, Asia and Africa, but also in the occupied and colonized Palestinian territories.

Two days ago, on June 17, 2012, The Times of Israel reported that "Norway’s Ministry of Finance announced Friday that a state fund that is Europe's largest equity investor would no longer invest in Israeli construction company Shikun and Binui." The decision was made due to "a recommendation from a state ethics board, which found the company was in contravention of international law by being involved in building projects in East Jerusalem," such as "a residential project in Kibbutz Ramat Rachel," in addition to construction and infrastructure contracts in illegal Israeli colonies such as "a 1994 project in the Maaleh Adumim settlement and the involvement of subsidiary Solel Boneh in projects over the Green Line, including in Har Homa."

Norway's ministry released a statement which read, in part, that Arison's company is "involved in the building of settlements in breach of international humanitarian law in East Jerusalem" and that "the construction of such settlements on occupied territory represents a violation of the Fourth Geneva Convention." The ministry explained its divestment on ethical grounds, stating, "The exclusion is based on an evaluation of the future risk that the company will contribute to serious violations of the rights of individuals in war or conflict."

Ted's son Micky is currently the CEO of Carnival Cruises and majority owner of the Heat. He is a multi-billionaire and, as of March 2012, is the 72nd richest person in the United States. During the wake of Hurricane Katrina, Carnival was gifted with a government contract to the tune of $236 million for the use of cruise ships to house hurricane victims, despite an offer by a Greek company to provide two of its own ships for free. The Carnival ships were barely used and sat docked and mostly empty. Two United States Senators, Tom Coburn (R-OK) and none other than Barack Obama (D-IL) even called the contract a "sweetheart" deal in a letter to Homeland Security Secretary Michael Chertoff asking him to explain the contract with the Miami-based company. Furthermore, "the senators alleged the contract guaranteed the Carnival Cruise Lines brand rates that were much higher than market levels."

Shari Arison, Ted's daughter, currently holds the elite title of Israel's richest woman and has, in the past, faced allegations by her second husband that she kidnapped their son and defended her third husband during a a sexual harassment suit that ended in conviction.

Furthermore, the Ted Arison Family Foundation - a "philanthropic" charity - has contributed millions of dollars to Birthright Israel, the racist, militarist and ethnosupremacist organization that provides free propaganda trips to Israel for young Jews. Incidentally, the Adelson Family Foundation (yes, that Sheldon and Miriam Adelson, of Citizens United fame) has contributed over $100 million to Birthright Israel since 2007.

A common scene from Birthright
But the Heat's connection to the State of Israel isn't just limited to the Arison clan. Israeli multi-millionaire real estate magnate, nosy landlord, and free speech enemy Raanan Katz is a minority owner of the Heat (along with Julio Igelsias, billionaire Sidney Kimmel and casino group CEO Robert Sturges), owning approximately 12% of the franchise. Katz is a former Israeli basketball player and former owner of the Maccabi Tel Aviv ball club.

Last night, Katz was pictured with former Israeli Occupation Soldier Gilad Shalit, who was held prisoner in Gaza for over five years before being released by Hamas in a prisoner exchange eight months ago and who is now attending the NBA Finals as a sports correspondent for the Israeli press for some reason.

"God can always help; we need him on our side against Dallas," joked Katz, back in 2006 when the Heat were poised to play the Mavericks. "Every Israeli must support us; they must go the Western Wall and pray for us. Miami Heat is no less Israeli than Maccabi. This is also a group with Israeli ownership in which many Americans play."

The Heat went on to win their first national championship that year. One wonders if a renewed call for prayer will help them beat the Thunder this time around.

The Seattle SuperSonics played their first NBA season in 1967 - just months after Israel launched an aggressive military operation and occupied the remaining 22% of historic Palestine that it hadn't already seized in 1948.  The Sonics' tenure in Seattle lasted until 2008.  The occupation of Palestine continues unabated to this day, subsidized by U.S. taxpayers and further entrenched by corporate ideologues like the Arisons, with no end in sight. 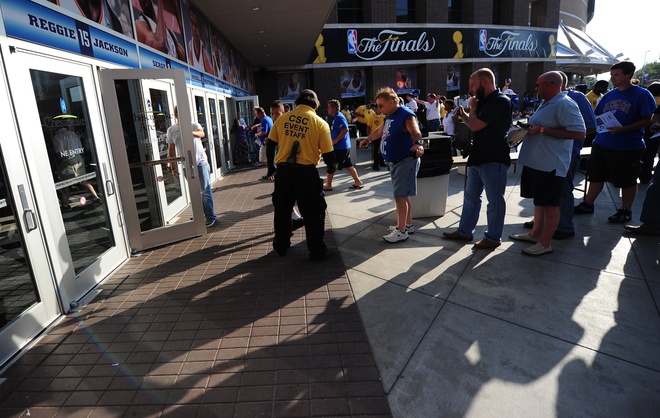 Fans queue before a security check upon arrival for Game 2 of the NBA Finals at the Chesapeake Energy Arena in Oklahoma City, Oklahoma, June 14, 2012. (Robyn Beck, AFP/GettyImages)

IDF Hawara Checkpoint, June 2006 (photo: Magne Hagesæter)
So yes, Bennett and McClendon are undoubtedly greedy rich conservatives with a terrible agenda and it's appalling to steal a beloved sports team from its hometown after 41 years.  But it's actually a war crime to build illegal and discriminatory colonies on stolen land, something the Arison family makes millions doing.

With this in mind, maybe we should start referring to Arison and Katz's squad as The Har Homa Heat.