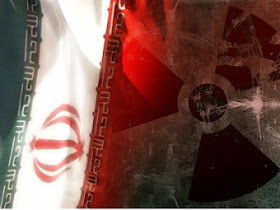 Two news reports by major wire services this weekend demonstrate just how pervasive misinformation and propaganda are in the mainstream media when it comes to the Iranian nuclear issue.

Reuters reported this week that Catherine Ashton, the European Union's High Representative for Foreign Affairs and Security Policy and chief nuclear negotiator for the P5+1, has high hopes for the new round of talks with Iran resuming May 23rd in Baghdad and will approach the meeting as a “serious set of discussions that can lead to concrete results.”

Sounds positive enough, especially when coupled with the statement Ashton made at the end of last month's meeting in Istanbul. "We have agreed that the Non-Proliferation Treaty forms a key basis for what must be serious engagement, to ensure all the obligations under the NPT are met by Iran while fully respecting Iran’s right to the peaceful use of nuclear energy."

However, another comment made by Ashton on Friday is cause for considerable concern. She told reporters in Brussels, "My ambition is that we come away with the beginning of the end of the nuclear weapons programme in Iran. I hope we’ll see the beginnings of success.”

Such a statement is certainly alarming. Despite the hysterical cries of Israeli Prime Minister Benjamin Netanyahu and his right-wing acolytes here in the U.S., both Western and Israeli intelligence, along with the IAEA, have consistently confirmed that Iran has no nuclear weapons program.

One would assume that the chief P5+1 negotiator would understand and acknowledge this simple - and vitally important - fact. Perhaps Ashton's recent private audience with Netanyahu in Jerusalem was more dangerous and detrimental to the negotiations than one would even expect.

(Of course, the sheer absurdity of Ashton's meeting with the Prime Minister of a state that is not a signatory of the NPT, has an undeclared stockpile of hundreds of nuclear warheads, is a constant violator of international law and perpetrator of war crimes, and which is in consistent breach of countless Security Council resolutions goes without saying. That Netanyahu would have any role whatsoever in these discussions, let alone issuing demands to both the U.S. government and Ashton herself, proves beyond a shadow of a doubt how designed for failure these negotiations were from the start.)

In one of the most embarrassing examples of published propaganda over the Iranian nuclear program to date, The Associated Press today "reported" that it has obtained an undated "computer-generated drawing" of "an explosives containment chamber of the type needed for nuclear arms-related tests that U.N. inspectors suspect Tehran has conducted" at its Parchin military complex.  The news agency says it was bequeathed this rendering "by an official of a country tracking Iran’s nuclear program who said it proves the structure exists."

One version of the AP exclusive contains this detail:


That official said the image is based on information from a person who had seen the chamber at the Parchin military site, adding that going into detail would endanger the life of that informant. The official comes from an IAEA member country that is severely critical of Iran's assertions that its nuclear activities are peaceful and asserts they are a springboard for making atomic arms.

What mysterious country could that possibly be, one wonders?!  The answer is so painfully obvious as to make AP scoopster George Jahn's attempts at anonymity patently ridiculous and pathetic.  Jahn, unsurprisingly, has a long history of silly reporting on the Iran nuclear issue.

This detonation chamber stuff, by the way, has been debunked for half a year now.

The story also notes that former IAEA official Olli Heinonen, who himself has a long history of pushing dubious information about Iran's nuclear file, said that the computer graphic provided to the press is "'very similar' to a photo he recently saw that he believes to be the pressure chamber the IAEA suspects is at Parchin."  Heinonen added that "even the colors of the computer-generated drawing matched that of the photo."

Pretty convincing, huh?  Ok, here's the computer drawing this whole thing is about: 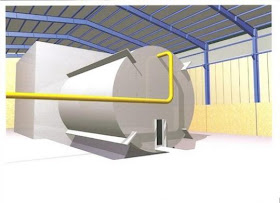 Yes, really.  That's it.  Really.  No, please stop laughing and believe me.  That's really the thing they're talking about.  Yes, seriously.  I mean it.

These are the depths to which propaganda about the Iranian nuclear program have sunk.  It's not even clever anymore, it's just stupid.

And just in case anyone is interested, I have successfully uncovered the true identities of the crack Israeli computer graphics team that came up with that drawing: 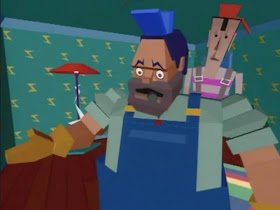 To be promoting such desperate and amateurish offerings like this Parchin drawing is actually unequivocal evidence that the warmongers and propagandists are in dire straits.

I want my NPT.

May 13, 2012 - For those who have forgotten, "b" over at the excellent Moon Of Alabama blog was quick to remind us about the "rather infamous drawings of mobile bio-weapon laboratories Colin Powell presented to the United Nations Security Council as 'proof' for weapons of mass destruction in Iraq."  Powell cited alleged evidence "from the thick intelligence file we have on Iraq's biological weapons" that he said proved "the existence of mobile production facilities used to make biological agents." He referenced "what we know from eyewitness accounts" and insisted, "We have firsthand descriptions of biological weapons factories on wheels and on rails."  He then presented these graphics to the Council: 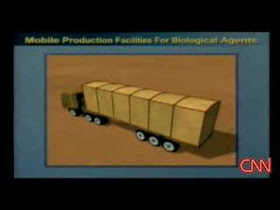 Yup.  And then the United States invaded Iraq, occupied it for almost a decade, and killed hundreds upon hundreds of thousands of human beings there.  Take another look at these images and think about that.  For a decade.

May 15, 2012 - One more thing: Remember how the mysterious unnamed "official" from "an IAEA member country that is severely critical of Iran's assertions" and which "asserts they are a springboard for making atomic arms" and who "said the image is based on information from a person who had seen the chamber at the Parchin military site," also noted (as I already quoted above) that "going into detail" about the source of this ridiculous drawing "would endanger the life of that informant"?

Well, let's recall what Colin Powell told the United Nations Security Council on February 5, 2003 at the outset of his 75-minute cavalcade of lies that he subsequently called "one of my most momentous failures" and "the lowest point in my life":


The material I will present to you comes from a variety of sources. Some are U.S. sources. And some are those of other countries.

Some of the sources are technical, such as intercepted telephone conversations and photos taken by satellites. Other sources are people who have risked their lives to let the world know what Saddam Hussein is really up to.

I cannot tell you everything that we know. But what I can share with you, when combined with what all of us have learned over the years, is deeply troubling.

"Deeply troubling," is one way to put it.  War crimes and crimes against humanity is another.


The Bush Administration showed reconnaissance photographs to the United Nations Security Council today to back up its assertion that Iraq is trying to conceal equipment used for making nuclear explosives.

At a private briefing this morning, American intelligence officials showed the 15-member Council classified photographs of uranium-enrichment machinery being moved around on trucks or buried to evade detection by United Nations inspectors.

As noted above, that was in early 2003, right?  Wrong.  It was June 27, 1991 and the "Bush Administration" was that of George Herbert Walker Bush, not his imbecilic successor.

At that time, the United States' deputy representative to the U.N. Security Council, Alexander F. Watson, claimed that the U.S. had "'strong evidence' that Iraq was trying to conceal factories for manufacturing these weapons," yet government officials "said the photographs that were shown to the Security Council at the briefing this morning could not be released because they would enable experts to assess American reconnaissance capability."

Furthermore, the Times reported that "a defecting Iraqi scientist" who had given himself up to American troops was insistent that "Baghdad had a secret nuclear weapons program in which it was using about 25 calutrons to produce highly enriched uranium" and "had suceeded in enriching some 90 pounds of uranium to weapons-grade level, providing it enough explosive material for several crude atomic bombs."  The paper of record then qualified its statements with this: "No trace of this uranium has been found by inspectors."

Meanwhile, the Times quoted State Department spokeswoman Margaret D. Tutwiler as declaring, "There is ample evidence from multiple sources that Iraq has been conducting a covert nuclear weapons program that has included activities to produce nuclear weapons material."