Biden to Israel: Bomb Away! 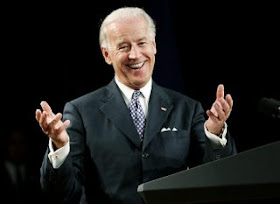 Speaking to an international assembly of 1,600 conservative rabbis in Atlanta today, self-proclaimed Zionist Joe Biden said that Israel still had time to attack Iran if it so chooses.

"The window has not closed in terms of the Israelis if they choose to act on their own militarily," the Vice President told the congregation. "I would not contract out my security to anybody, even a loyal, loyal, loyal friend like the United States."

This is not the first time Biden has made such a comment. During an appearance on the ABC's "This Week," Biden told George Stephanopoulos, "Look, we cannot dictate to another sovereign nation what they can and cannot do when they make a determination — if they make a determination — that they're existentially threatened and their survival is threatened by another country." Biden's comments were immediately walked back by the Obama campaign.

The claim that Iran somehow poses an "existential threat" to Israel is of course a long-running propaganda line often employed to fear-monger about Iran's nuclear energy program.  This view, however, is not shared by numerous Israeli officials including former IDF chief of staff Dan Halutz, former Mossad head Ephraim Halevy, and current Mossad head Tamir Pardo.  Even Israel's hawkish Defense Minister Ehud Barak, who is now leading the push toward an Israeli attack on Iran, said in 2009, "I am not among those who believe Iran is an existential issue for Israel. Israel is strong, I don't see anyone who could pose an existential threat."

Still, Biden declared, "We will prevent Iran from acquiring a nuke by whatever means necessary, period." A strong claim, to be sure, but one that rings a bit silly considering that according to the United States, the IAEA, and Israel - Iran isn't building nuclear weapons.

The Jewish Telegraph Agency reports that, during his speech today, the "vice president also called efforts to delegitimize Israel 'the most significant assault' on Israel since its independence." In an effort to burnish the Obama administration's Zionist credentials, Biden insisted, "At every point in our Administration, at every juncture, we have stood up for the legitimacy of the state of Israel."

For Biden, it seems, Israel's war crime light is still green...even if its armistice line isn't.

In the strangest comment of the day, though, Biden spoke of internal Iranian politics:


"The dissension between Ahmadinejad and the Supreme Leader is palpable. They will not both be around two years from now, and my bet is that Ahmadinejad is gone."

Clearly, Biden is nothing if not a deft gambler. Iranian President Mahmoud Ahmadinejad will absolutely not be in office two years from now, but it's not because of Biden's prescient prophesy. Iran has constitutionally mandated presidential term limits, just like we do here in the United States. Ahmadinejad is almost three years into his second and final term as president, which means that, by 2014, he will undoubtedly be "gone" from the Iranian executive regardless of what tea leaves Biden is reading...or smoking.

But Biden has long had problems understanding and retaining facts when it comes to foreign policy. For instance, in his 2008 debate against Sarah Palin, he bizarrely claimed, among other things, that prior to 2006, the United States, together with France, "kicked Hezbollah out of Lebanon" and insisted that the United States has the right and obligation "to keep the UN in line."  It is unsurprising that, at a campaign stop in Seattle in October 2008, Biden admitted, "I've forgotten more about foreign policy than most of my colleagues know."

Regarding the Obama administration's pro-Israel efforts, Biden told the crowd of rabbis, "I'm proud of our record. No president since Harry Truman has done more for Israel's physical security than Barack Obama."

Evoking Truman is a bold move, though not necessarily a smart one. Yes, it is true that the only person in history to authorize a nuclear attack on a civilian population (twice) that resulted in calculated, deliberate mass murder dismissed the advice of his own State Department officials when he recognized the nascent State of Israel on May 14, 1948, just eleven minutes after it declared itself a nation.  But he also laid out some uncomfortable truths that might not play so well with an assembly of Zionists.

In November 1945, Truman reportedly told a gathering of U.S. diplomats who were urging a more balanced American approach to the looming Palestine issue, "I'm sorry, gentlemen, but I have to answer to hundreds of thousands who are anxious for the success of Zionism. I do not have hundreds of thousands of Arabs among my constituents." Of course, there were hundreds of thousands of citizens of Arab descent living in the U.S. at the time, but since they were not as well organized or funded as their Zionist counterparts, from a political standpoint they might as well not have existed at all.

The same goes for Biden, his boss, and the U.S. Congress now.

Yet Truman also complained about the ongoing campaign of terrorism by Zionist militias in Palestine as well as the aggressive American Zionist lobbying he faced, notably from Cleveland-based Rabbi Abba Hillel Silver, who was then the chairman of the American wing of the Jewish Agency.  In a memorandum to his adviser David K. Niles, who, in the words of Truman State Department Middle East specialist Edwin M. Wright, "saw to it that the State Department influence was negated while the Zionist view was presented," Truman wrote, "We could have settled this whole Palestine thing if U.S. politics had been kept out of it. Terror and Silver are the contributing cause of some, if not all of our troubles."

Wright, during an oral history interview in 1974, revealed that in 1946 with the presidential election looming, Truman was visited by a group of leading New York Zionists, including Rabbi Stephen Wise and Congressman Emanuel Celler, who told him that they had just met with Truman's opponent Thomas Dewey, whom they had persuaded to support Zionist national goals in Palestine.  Dewey was "willing to come out and declare for a Jewish state, and we are going to turn our money and urge the Jews to vote for him unless you beat him to it," they told Truman.  "Then Emmanuel Cellar pounded upon Mr. Truman's desk and said, 'And if you don't come out for a Jewish state we'll run you out of town,'" recalled Wright, adding, "This, I'm sure, is the threat that Mr. Truman refers to in his book, saying, 'The extreme Zionists threatened me.'"  Wright notes, however, "Those are not the extreme Zionists at all, these were the regular Zionists."


"What Mr. Truman did was to cave in to these threats that they would support Mr. Dewey. In that way he got the Jewish money and the Jewish vote. His decision was not made from the point of view of what was going to result in the Middle East, but what was going on in the United States."

In 1947, as the United Nations Special Committee on Palestine desperately tried to find a reasonable and workable solution to the Palestine question, Zionist influence on the president increased. In his own memoirs, Truman wrote,


"The facts were that not only were there pressure movements around the United Nations unlike anything that had been there before but that the White House too, was subjected to a constant barrage. I do not think I ever had as much pressure and propaganda aimed at the White House as I had in this instance. The persistence of a few of the extreme Zionist leaders - actuated by political motives and engaging in political threats - disturbed and annoyed. Some were even suggesting that we pressure sovereign nations into favorable votes in the General Assembly."

How little has changed.

In a diary entry written on July 21, 1947, Truman reacted harshly to demands made of him that day by his Treasury Secretary and staunch Zionist Henry Morganthau, Jr. regarding Jewish refugees from Europe settling in Palestine. Truman wrote, "He'd no business, whatever to call me. The Jews have no sense of proportion nor do they have any judgement on world affairs." He continued,


"The Jews, I find are very, very selfish. They care not how many Estonians, Latvians, Finns, Poles, Yugoslavs or Greeks get murdered or mistreated as D[isplaced] P[ersons] as long as the Jews get special treatment. Yet when they have power, physical, financial or political neither Hitler nor Stalin has anything on them for cruelty or mistreatment to the underdog. Put an underdog on top and it makes no difference whether his name is Russian, Jewish, Negro, Management, Labor, Mormon, Baptist he goes haywire. I've found very, very few who remember their past condition when prosperity comes."

Biden didn't relay these particular tidbits to the assembly of rabbis.  Shocking.