That Was Now, This is Then:
Another Pro-War Resolution Hits the House Floor 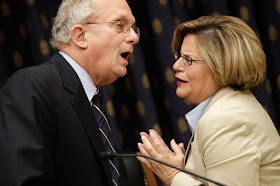 Debunking statements about Iran made by House Representatives and Senators on the floor of Congress is tedious and boring. Most of the statements are inarticulate readings of AIPAC-drafted talking points and boilerplate hasbara. M.J. Rosenberg has already excellently addressed the point of this legislation and there is no need to repeat, ad nauseum, why most of what's in the bill is wrong, how 13,000 AIPAC operatives were dispatched through the halls of Congress to garner sponsorship and support for the bill, how shameful it is for elected officials to spout pure propaganda about silly cartoon drawings and absurd assassination plots, and how - despite the many repetitions of the same infamous and long-debunked claim (which has literally appeared in over 50 Congressional resolutions since 2005) - even Israeli Minister of Intelligence and Atomic Energy Dan Meridor admitted on Al Jazeera that Iran has never threatened to "wipe Israel off the map."

No, this time around it's best to simply look at how statements made during Tuesday's floor debate compare to statements made a decade ago (and longer).  After so much deceit, destruction and death, how can anyone take this stuff seriously?


Saddam Hussein is not far from developing and acquiring the means to strike the United States, our friends and our allies with weapons of mass destruction. Thus, if we do not act now, when?


The Iranian regime continues to pose an immediate and growing threat to the United States, to our allies, and to the Iranian people.  We are running out of time to stop the nightmare of a nuclear weapons-capable Iran from becoming a reality...We must meet our responsibility to the American people and protect the security of our Nation, our allies, and the world from this threat of a nuclear capable Iran.


[T]hat the leaders of a rogue state will use nuclear, chemical or biological weapons against us or our allies is the greatest security threat we face.


The threat of nuclear proliferation is the greatest threat to world peace. A nuclear Iran would destabilize the region and threaten the United States and our allies.


But under today's circumstances, the best way to give peace a chance and to save the most lives, American and Iraqi, is for America to stand united and for Congress to authorize the President to use force if Saddam does not give up his weapons of mass destruction. Confront Saddam now, or pay a much heavier price later.


What better time for this body to send an unambiguous message that Iran must never be allowed to achieve a nuclear weapons capability and that its nuclear weapons program must end once and for all?


Iraq continues to flaunt its hostility toward America and to support terror.


Iran has flaunted its flagrant disregard for U.N. Security Council resolutions, is an active state sponsor of terrorism, has engaged in serious human rights abuses against its own citizens, and plotted a heinous terrorist attack on American soil.


By seeking weapons of mass destruction, these regimes pose a grave and growing danger...[T]ime is not on our side.  I will not wait on events, while dangers gather.  I will not stand by, as peril draws closer and closer.  The United States of America will not permit the world's most dangerous regimes to threaten us with the world's most destructive weapons.


Iran is developing the capability to quickly produce a nuclear weapon at a time of its choosing. Iran's acquisition of such a capability would create a significant new regional danger and be an immediate threat to America's interest and allies in the Middle East.


The threat from Iraq is real, and it cannot be permanently contained...We have no doubt that these deadly weapons are intended for use against the United States and its allies. Consequently, we believe we must directly confront Saddam, sooner rather than later.


And so, as the window is closing, we send a clear message that the House is aligned with the administration in thoroughly rejecting containment...In fact, we have no choice but to stop Iran’s nuclear weapons program before it ever reaches that point.


[Saddam Hussein] continues his efforts to develop and acquire weapons of mass destruction, and he sponsors international terrorism. Saddam Hussein continues to be an unacceptable threat whose duplicity requires action, action now.


The most significant threat to peace, regional security, and American interests in the Middle East is Iran's nuclear program...Iran continues to be a sponsor of groups committed to the destruction of our ally Israel and of groups that threaten Americans throughout the world.


Saddam Hussein's regime is a grave threat to America and our allies, including our vital ally, Israel... Every day he gets closer to his longtime goal of nuclear capability. We must not allow him to get nuclear weapons.


[I]t is imperative that the United States and the international community understand that a nuclear-capable Iran is a global threat and a danger to the United States and, just as important, to the State of Israel...This is a direct threat to our closest ally in the Middle East.


[I]f left unchecked, Saddam Hussein will continue to increase his capacity to wage biological and chemical warfare, and will keep trying to develop nuclear weapons.


[I]t is Hussein's vigorous pursuit of biological, chemical and nuclear weapons, and his present and potential future support for terrorist acts and organizations, that make him a terrible danger to the people to the United States.


[F]ailing to prevent a nuclear-armed Iran would ignite a destabilizing arms race in the Middle East, would threaten the very existence of our ally Israel, and would endanger the security of the American people.


There is no question that Iraq possesses biological and chemical weapons and that he seeks to acquire additional weapons of mass destruction, including nuclear weapons. That is not in debate.


Iran has been involved in the proliferation of weapons of mass destruction, whether they are nuclear or chemical or biological...We must not underestimate their ability to manufacture nuclear weapons.


The people of the United States and our friends and allies will not live at the mercy of an outlaw regime that threatens the peace with weapons of mass murder.


For the Iranian regime, the possession of the capability to produce a nuclear weapon would be almost as useful as actually having one...Tehran would be in the driver's seat, and the security of the United States, Israel, and our many other allies would be in their hands.


[Saddam Hussein's] weapons of terror...are a direct threat to this country, to our people, and to all free people.


[Iran's] attainment of a nuclear weapon would be fraught with peril for free people everywhere... [O]ur position must be that we will not support or stand for an Iran with nuclear weapons.


[Saddam Hussein's] continued pursuit of weapons of mass destruction is potentially a threat to the vital interests of the United States.


First of all, we've got all options on the table, because we want to make it very clear to nations that you will not threaten the United States or use weapons of mass destruction against us, or our allies or friends...[Saddam Hussein] is a problem, and we're going to deal with him. But the first stage is to consult with our allies and friends, and that's exactly what we're doing.


With a nuclear weapons capability, the regime would dramatically increase its ability to threaten the United States and our allies. We are running out of time to stop the nightmare of a nuclear weapons-capable Iran from becoming a reality.


As I say, all options are on the table. The use of force is the last option for any president and you know, we've used force in the recent past to secure our country...In all these instances we want diplomacy to work and so we're working feverishly on the diplomatic route and we'll see if we're successful or not.


Let there be no doubt: America is determined to prevent Iran from getting a nuclear weapon, and I will take no options off the table to achieve that goal. But a peaceful resolution of this issue is still possible, and far better, and if Iran changes course and meets its obligations, it can rejoin the community of nations.


The urgent nature of the Iranian nuclear threat demands that the United States work with our allies to do everything possible diplomatically, politically, and economically to prevent Iran from acquiring a nuclear weapons capability. No option, as the President has said, can be taken off the table.

It is no surprise - as Congressman Dennis Kucinich pointed out in his own admirable statement from the house floor - that Colonel Lawrence Wilkerson, Colin Powell's former Chief of Staff, has warned, "This resolution reads like the same sheet of music that got us into the Iraq war, and could be the precursor for a war with Iran. It's effectively a thinly-disguised effort to bless war."

Actually, it hardly seems disguised at all.

Below are the eleven Congressmembers who voted against the absurd resolution:

But hey, it's better to be a coward than to be firmly in AIPAC's bloody pocket.