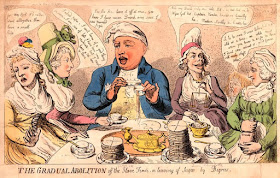 "The gradual abolition of the slave trade: or leaving of sugar by degrees in 1792"
by Isaac Cruikshank

"As the boycott, divestment and sanctions (BDS) movement continues full-steam ahead in its efforts to force Israel to comply with international law, pro-Israel hawks are increasingly attempting to link the movement to anti-Semitism and Nazi Germany-era policies."

The latest example of this disingenuous and intellectually dishonest smear campaign comes (unsurprisingly) from Jeffrey Goldberg, the former IDF prison guard, unabashed warmonger, and Zionist apologist and propagandist, who recently cheered the New Israel Fund for, in his words, leaving the "BDS swamp."

Despite Goldberg's claim to be "running a campaign on this blog against the cheap deployment of Nazi imagery in argument-making," he does just that, stating that "it's a fair analogy" to liken the boycott of Israeli goods to the Nazi boycott of Jewish businesses in 1933, explaining that "the BDS movement, like no other anti-Israel propaganda campaign, has sent chills down the collective Jewish spine precisely because economic boycotts have been, throughout history, used to hurt Jews."

Kane, in his cogent response, accurately points out many of Goldberg's errors. For example, Kane notes that the BDS campaign is not a "European-centered campaign," as Goldberg writes, but rather is "a Palestinian-led civil society movement that has spread to the Western world." He also points out that Goldberg is "guilty of conflating Israel with Judaism, and Jews with Israelis," continuing:

"The BDS movement is not an economic boycott directed against Jews; it is a boycott movement directed against the State of Israel, which labels itself the Jewish State, because of its flagrant violations of international law and its continued occupation of Palestinian land."

As per the Nazi analogy, Kane writes that while "Nazi Germany instituted a blanket boycott...directed at a persecuted minority just because of their religious faith...[t]he BDS movement is targeting a state, asking Israel to comply with their obligations under international law, because of their unjust and oppressive policies towards the Palestinian people."

But this is not the limit of Goldberg's spurious claims and specious equivalency. What could - and should - also be addressed is Goldberg's blanket contention that "economic boycotts have been, throughout history, used to hurt Jews."

This statement follows Goldberg's pattern of labeling any and all human rights efforts as "anti-Semitic" whenever they happen to address war crimes, contempt for international law, rampant and aggressive discrimination, land and water theft, ethnic cleansing, and collective punishment routinely committed by the Israeli government and military and widely supported (or ignored, or justified) by the Israeli public.

Goldberg not only traffics in knee-jerk emotional blackmail, as usual - yelling "Nazi!" in a crowded blogosphere - but also relies on a very selective historical memory regarding the history of boycotts and campaigns to educate the public about ongoing injustice and mobilize it against such atrocities.

Even leaving the most obvious, and historically recent, connection of the boycott of Apartheid South Africa to the BDS call aside, Goldberg's contention still falls flat.

In what the BBC describes as "one of the earliest examples of consumers using their purchasing power to reject the trade in goods which have not been ethically produced," British civil society widely boycotted sugar produced by slaves in the Caribbean in 1791. Spurred by the distribution of thousands of pro-boycott pamphlets by the London Society for Effecting the Abolition of the Slave Trade, eventually some 300,000 Britons boycotted sugar, resulting in sugar sales dropping by anywhere from a third to a half during that time. Many shops even advertised goods produced by 'freemen,' while sales of sugar from India, where slavery was not used, increased tenfold over two years.

BBC reports that "Hundreds of thousands of people also signed petitions calling for the abolition of the slave trade. Many supported the campaign against their own interests. For example, in Manchester (which sold some £200,000 worth of goods each year to slave ships) roughly 20% of the city's population signed petitions in support of abolition. The size and strength of feeling demonstrated by these popular protests made even pro-slavery politicians consider the consequences of ignoring public opinion. One pro-slavery lobbyist of the time noted that the 'Press teems with pamphlets upon the subject...The stream of popularity runs against us.'"

Also, during this time, even artists joined the fight to expose injustice. Poet Robert Southey spoke of tea as "the blood-sweetened beverage," and Sir William Fox urged the tea drinker "As he sweetens his tea, let him...say as he truly may, this lump cost the poor slave a groan, and this a bloody stroke with a cartwhip."

One wonders what could be written today about every dollop of Sabra hummus or each squirt of Ahava moisture-enhancing face "cleanser."

As Goldberg invokes the Nazi boycott of Jewish businesses to disingenuously link BDS to anti-Semitism, he doesn't address the fact that the boycott lasted (at most) three days, was widely ignored by the German public and abandoned due to its damaging effect on the economy. He then deliberately ignores the historical record, which shows that the ineffective (though unquestionably appalling and racist) Nazi boycott was actually preceded by an anti-Nazi boycott of German business, organized by the American Jewish community.

On March 23, 1933, less than two months after Hitler was sworn in as Chancellor, less than one month after the infamous Reichstag Fire of February 27 (the false-flag operation which paved the way for massive Nazi gains in the parliamentary elections six days later) and the exact same day that the parliament voted overwhelmingly to give Hitler dictatorial powers, New York City's Jewish War Veterans, after considering the consequences for the already persecuted German Jewry, became the first American organization to announce a trade boycott of the Third Reich and organize a massive protest parade, in which over 4,000 veterans marched on City Hall and were welcomed by Mayor John P. O'Brien. 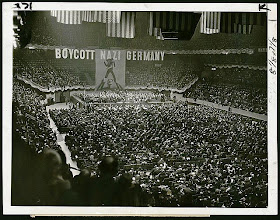 Nevertheless, the boycott movement - both in the US and worldwide - was largely unsuccessful, in part due to governments' unwillingness to cut economic ties with the heavily industrialized Germany, but also because the Jewish community itself was divided on the issue. Historian Lenni Brenner writes that "there were those in the Jewish community in America and Britain who specifically opposed the very notion of a boycott. The American Jewish Committee, the B’nai B’rith (Sons of the Covenant) fraternal order and the Board of Deputies of British Jews refused to back the boycott. However, of all of the active Jewish opponents of the boycott idea, the most important was the World Zionist Organisation (WZO). It not only bought German wares; it sold them, and even sought out new customers for Hitler and his industrialist backers."

The WZO, intent on pursuing policies which would promote the establishment of a Zionist state in what was then Mandatory Palestine, "saw Hitler's victory in much the same way as its German affiliate, the ZVfD [Zionistische Vereinigung fuer Deutschland, or the Zionist Federation of Germany]: not primarily as a defeat for all Jewry, but as positive proof of the bankruptcy of assimilationism and liberalism," Brenner tells us. These sentiments were enthusiastically expressed by the renowned German biographer Emil Ludwig during a visit to the United States at the time. "Hitler will be forgotten in a few years, but he will have a beautiful monument in Palestine," he said. "Thousands who seemed to be completely lost to Judaism were brought back to the fold by Hitler, and for that I am personally very grateful to him.” (Meyer Steinglass, "Emil Ludwig before the Judge," American Jewish Times, April 1936)

Clearly, Zionist opposition to morally-justifiable boycott - in service of its ethnocentric ideology - is nothing new. But as history has shown, boycotts can succeed despite libelous opposition and propaganda - it just takes time.

A portion of this article was previously published in my September 10, 2010 piece, "The Thin Green Line," here on Wide Asleep in America.
Nima Shirazi
Share