Citations Needed, Episode 04: The Root of All Evil 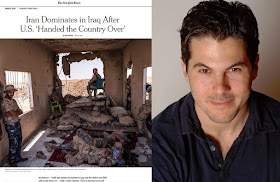 A recent New York Times presents a Manichean worldview wherein the United States’ invasion of Iraq was noble and just, while Iran’s relationship with its neighbor is nefarious and dangerous. The article was written by Baghdad bureau chief Tim Arango (picture above, right).

Episode 4 of Citations Needed, my new media criticism podcast co-hosted by Adam Johnson, is out.

This week, we talk about a recent New York Times article — and the broader media habit of painting the United States as benevolent democracy-seeker, while Iran and other Official Enemies™ are presented only ever as cynical imperialists.

In this episode, Adam and I dissect the true history of what caused chaos in Iraq, who’s to blame and what the real motives were behind the Bush, Obama and Trump administrations’ designs for the country. All this in the context of a battle for control over remaining ISIS territory in Syria; and Washington’s, Riyadh’s, and Tel Aviv’s desire to stop the dreaded “Shia crescent.”

Show Notes for this episode can be found here.

Citations Needed is produced by Josh Kross and Florence Barrau-Adams. Our theme song is ‘Nonphenomenal Lineage’ by Grandaddy.