Dumbstruck: A Deafening Silence in Defense of American Hypocrisy 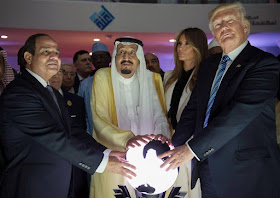 In orb, they trust.

Guess what? The United States of America doesn't actually care about democracy or human rights. Shocking, I know.

But rarely has the indefensible nature of American hypocrisy been more perfectly or publicly displayed than by high-ranking State Department official Stuart Jones at a press briefing yesterday.


Stuart Jones, who was appointed as U.S. Ambassador to Iraq by former President Barack Obama in 2014 before assuming the title of assistant secretary of state for near eastern affairs in January, took a long, silent pause after an Agence France-Presse reporter asked the official how President Donald Trump could criticize Iran's democracy, while standing next to Saudi Arabian officials. Saudi Arabia is an absolute monarchy, where every position of power is appointed by either the king or other members of the Al Saud royal family from which the nation derives its name. Trump recently visited Saudi Arabia, a close ally of the U.S., and took the opportunity to deeply criticize the two nations' mutual foe, Iran, and its commitment to democracy weeks after it held its presidential election.

It's surprising and, frankly, frustrating that reporters don't routinely ask this very obvious question more often. Yet Jones' dazzling unpreparedness in the face of such a query is a testament not only to how infrequently US officials are ever put on the spot to defend their government's double standards.

In lieu of delivering an actual answer, Jones became visibly uncomfortable, signed audibly, stared blindly into nothingness and said nothing for roughly 18 seconds. You could see the squeaky gears laboring to rotate in his head. You hear the faint trickle of urine run down his thigh. You could feel Jones praying to be suddenly whisked away by a dragon-drawn chariot sent to him by the sun god Helios.

Watch it. It's beautifully painful.