The Consistency of Official Iranian Commentary:
What 'Death to America' Means Is Obvious 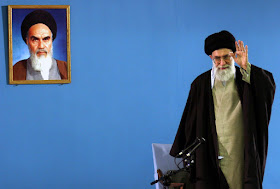 In a meeting with students this week, Iranian leader Ali Khamenei addressed the meaning of the phrase "Death to America," which gained popularity as a revolutionary slogan over three and a half decades ago in defiance of the U.S.-backed Shah.

"Obviously by 'Death to America', we don't mean death to the American people," Khamenei said. "The American nation is just like the rest of the nations." Rather, he explained, the phrase "means death to the United States' policies, death to arrogance."

Condemning American imperialism in the Middle East and the thirty-five year emphasis on promoting regime change in Iran, Khamenei said, "The truth is that the United States' objectives regarding the Islamic Republic of Iran have not changed at all. And they would not spare a moment if they could destroy the Islamic Republic; but they can't."
That the ubiquitous chant "Death to America" is not a murderous threat (or aspiration) directed at individuals, but rather at the policies and actions of the U.S. government, should be obvious. Nevertheless, many mainstream media reports seemed astounded by Khamenei's explanation, as if this revelation was brand new and signaled a shift from past statements from Iranian officials.

CNN's Don Melvin, for instance, was baffled by Khamenei's explanation, calling it "new" and "convoluted." Melvin was convinced that the Iranian leader was futilely attempting to "redefine the meaning of the slogan."

The Moon of Alabama blog breaks down this phenomenon perfectly:


A typical part of propaganda campaigns is to claim that the "villain" has very recently changed his political positions. Then follows "analysis" which interprets the "change" as a sure sign that the villain is under pressure and on the verge of loosing the fight. Often such claims are completely unfounded as the villain only repeated a long standing position. They are only made to repeat, repeat, repeat ... that the villain is or was up to something bad.

But the actual - and again, obvious - meaning of the phrase has been pointed out numerous times, both in recent memory and beyond.

In an interview with CBS in September, Iranian President Hassan Rouhani was perfectly clear about what "Death to America" means:


This slogan that is chanted is not a slogan against the American people. Our people respect the American people. The Iranian people are not looking for war with any country, but at the same time the policies of the United States have been against the national interests of Iranian people. It's understandable that people will demonstrate sensitivity to this issue. When the people rose up against the Shah, the U.S. aggressively supported the Shah until the last moments. In the eight year war with Iraq, the Americans supported Saddam. People will not forget these things. We cannot forget the past, but at the same time, our gaze must be towards the future.

A month earlier, in August, journalist Reese Erlich reported for the Global Post (and syndicated by USA Today) how Iranians have always understood the slogan's meaning:


"Death to America" expresses the anger many Iranians feel about U.S. policy toward Iran, said Foad Izadi, an assistant professor of world studies at the University of Tehran. Iranians remember that the U.S. overthrew the legitimate government of Mohammad Mossadegh in 1953 and supported the dictatorial Shah who followed.

The slogan "means death to American foreign policy," said Izadi. Iranians "have problems with the American government, not the American people." In fact, he said, Iranians are friendly to Americans. "When you walk around town, and people see you're an American, everyone wants to take care of you."

In July, it was more of the same. Speaking with The New Yorker's Robin Wright, Rouhani's chief of staff Mohammad Nahavandian noted:


If you go and ask anyone who uses that slogan... what he is against, it is interference in Iran's policies by overthrowing a nationally elected prime minister at the time of Mossadegh. For them, what they are against is the kind of government who shoots an airplane full of innocent passengers. For them, it's not the people of America, per se. For them, they are opposed to that sort of policy, that sort of attitude, that sort of arrogance. It's not a nation. It's a system of behavior.

On January 26, 2014, CNN's Fareed Zakaria aired an interview with Rouhani, during which Rouhani said, "Well, the people, when they say 'Death to America,' do you know what they are really saying? What they mean to say relates to the aggressive policies of the U.S. and intervention and meddling by the U.S. We don't want those to continue. We want people to decide for themselves."

But this definition is not only the position of the current administration. Rouhani's predecessor, Mahmoud Ahmadinejad, one of the West's favorite bogeymen, was equally clear about what the phrase means.

In a February 12, 2007 interview with ABC News' Diane Sawyer, Ahmadinejad said this:


When you heard death to America slogans, I think you know it yourself, it is not related in any way to American public. Our people have no problem with American public and we have a very friendly relationship and this friendship is so great, that I wrote a letter to the American government, the aviation sector of our country and we wanted to establish direct flights from Tehran to New York and we want to have free travel of citizens.

We do not have any problems with the people and right now, for example, we have our scientists and a sportsman traveling to the U.S. The "Death to America" chant you have heard, they go back to some of the policies of Americans, American politicians in Iran. People still remember the support of American politicians for some murders. For example, Saddam, who was hanged, and eight years of war to us, and the current American administration. The current incumbent [vice] president provided support. Hundreds of thousands of Iranian youth were killed and the U.S. administration, instead of doing what was right and supporting Saddam... People are now wishing death for these policies.

Statements by Iranian officials about the "Death to America" slogan have been consistent for a long time. It's about time the press started paying attention and not act so surprised when it inevitably happens again.