With A Little Help From Tehran Bureau, Bad Reporting and Nuclear Alarmism Returns to The Guardian 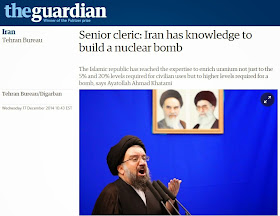 
An official site belonging to the Islamic Revolutionary Guard Corps (IRGC) has quoted a senior conservative cleric as saying that Iran has attained the knowledge to build a nuclear bomb but doesn’t want to use it.

The IRGC site of Kurdistan province today quoted Ayatollah Ahmad Khatami, a leading cleric who often leads Friday prayers in Tehran, as telling a group of IRGC commanders in Iran’s Kurdistan province that Iran had the expertise to enrich uranium not just to the 5% and 20% levels required for civilian uses but to higher levels required for a bomb. “[We] can enrich uranium at 5% or 20%, as well as 40% to 50%, and even 90%,” he was quoted as saying. But he said the Islamic republic believed that the building of a bomb is religiously forbidden.

Furthermore, Tehran Bureau boasts, "Khatami's speech was widely covered by the Iranian press, but the remarks about Iran's nuclear bomb-making capabilities were not reported."

What an exclusive! What breaking news!

Before addressing the details of the disingenuous reportage, a larger point looms. Tehran Bureau's headline and lede claiming that, according to a senior cleric, Iran now has "the knowledge to build a nuclear bomb" are not only irresponsible and misleading, they are genuinely incorrect.

The reporting wholly conflates uranium enrichment with nuclear bomb-making; this is absurd. Obtaining enriched uranium at weapons-grade levels (90% or more) is but one component of manufacturing a nuclear weapon, but one that pales in relative comparison to mastering the detonation process, requisite missile technology, and making a bomb deliverable. It's like standing next to a pile of steel, plastic and glass, and claiming an ability to make a Ferrari.

Iran has the technical ability to enrich uranium up to roughly 19.75%; it began enriching to this level in February 2010, under strict IAEA monitoring. By early 2013, Iran had already begun voluntarily converting its stockpile of 19.75% LEU to reactor fuel, a process rendering such material incapable of weaponization. Conversion of all remaining 19.75% stocks was agreed to under the multilateral interim nuclear deal struck between Iran and six world powers in November 2013. Earlier this year, the IAEA confirmed that Iran had completed the conversion process, leaving no 19.75% LEU in the country.

As is often pointed out, the technical capacity to enrich uranium to nearly 20%, "accomplishes much of the technical leap towards 90% – or weapons-grade – uranium."


Uranium enrichment has a kind of momentum curve, where it takes much more effort to go from 0% enriched to 20% enriched than it does 20% enriched to 90% enriched. Here's the chart: The vertical axis represents "effort" as measured in things called Separate Work Units, which is basically the given quantity of uranium measured in kilograms needed to reach a given level of enrichment. The horizontal axis is enrichment percentage. 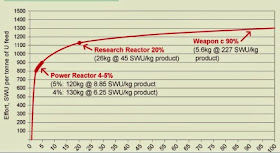 By virtue of having functional uranium enrichment facilities and technical expertise to spin centrifuges, Iran - like any other nation with that technology - can create weapons-grade material if it decided to. But this doesn't mean it can already "build a nuclear bomb."

Moreover, Tehran Bureau's paraphrased quote from Khatami is itself misleading. The source of the quote can be found here, although Tehran Bureau does not provide a link over to it, a highly unprofessional reporting practice.

Mohammad Ali Shabani, a doctoral researcher at the University of London's School of Oriental and African Studies (SOAS), notes that the focus of Khatami's speech before the IRGC gathering was not the nuclear issue, but rather Iran's Kurdistan province and Syria. While Khatami is by no means an expert on nuclear technology, when he did touch briefly on the subject, this is what he said, according to Shabani's translation:


[But] even if we could build a bomb, we would not do such a thing as our Guardian Jurist [Ayatollah Khamenei] deems use [of such weapons] impermissible (haraam). The West's concerns are not about a bomb, but Iran's capabilities; just as our nuclear scientists enriched uranium from 5% to 20%, undoubtedly they can [do so] to 40%, 50% and finally 90%, which is needed in order to build a bomb, and they [Iran's scientists] posses this knowledge. Our role model is our Dear Prophet, who even forbade the poisoning of an enemy city, and this is our evidence [basis] for not building a bomb.

This is a political statement, not a technical declaration. Nowhere does Khatami state that Iran can build a nuclear weapon. Tehran Bureau's reporting also omits the fact that such statements about such scientific capabilities and the nation's official, absolute prohibition on nuclear weapons are nothing new for Iranian officials.

A couple years later, in April 2012, The Guardian itself reported on a nearly identical statement made by Gholamreza Mesbahi Moghadam, a minister of the Iranian parliament. The framing in both that piece and the latest report are very similar:


Iran has the technological capability to produce nuclear weapons but will never do so, a prominent politician in the Islamic republic has said.

The statement by Gholamreza Mesbahi Moghadam is the first time an Iranian politician has publicly stated that the country has the knowledge and skills to produce a nuclear weapon.

Moghadam, whose views do not represent the government's policy, said Iran could easily create the highly enriched uranium that is used to build atomic bombs, but it was not Tehran's policy to go down that route.

Moghadam told the parliament's news website, icana.ir: "Iran has the scientific and technological capability to produce [a] nuclear weapon, but will never choose this path."

The 2012 Guardian report sparked false conclusions and predictable reactions from Israeli officials,  who eagerly exploited the non-news for political posturing. The following year, a number of different reports published by The Guardian contained bad analysis, dubious allegations and sloppy journalism.

Unfortunately, The Guardian, now in partnership with Tehran Bureau, is at it again.