Pictures of a Revolution: Iran, 35 Years Ago 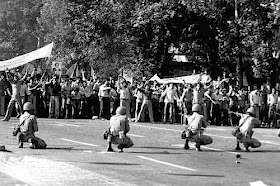 Thirty-five years ago this week, a massive popular uprising in Iran finally succeeded in deposing the U.S.-backed dictatorship of Shah Mohammad Reza Pahlavi after years of severe repression and months of growing unrest.

Below are photos taken between November 1978 and February 1979. 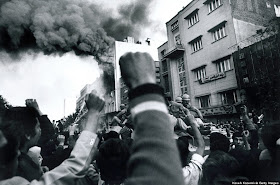 November 4, 1978: Troops loyal to Shah Mohammad Reza Pahlavi arrive to control a crowd of demonstrators outside a burning government building at the height of Islamic revolutionary fervor in Tehran. 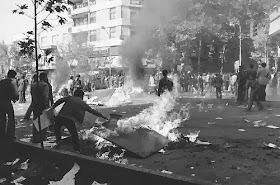 November 5, 1978: Fires are set on Tehran's main streets during anti-government protests. Many banks and cinemas were burned and damaged. November 5, 1978: A view of Tehran after demonstrators set fire to many banks and movie theaters. 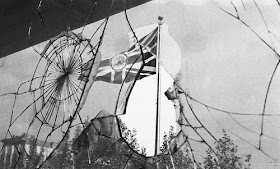 November 5, 1978: Damage to the British Embassy in Tehran after huge anti-Shah demonstrations sweep the Iranian capital. 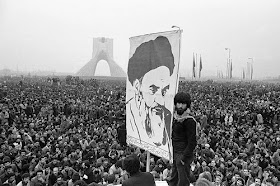 December 10, 1978: A poster of Ayatollah Ruhollah Khomeini rises over a massive anti-Shah demonstration at the Shahyad (now Azadi) monument, built to commemorate 25 years of the monarch's reign and a symbol of his power. An estimated one million people filed peacefully through the city chanting support for their exiled spiritual leader and calling for the end of the Shah's rule. 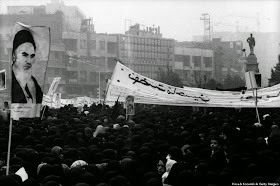 December 11, 1978: Revolutionary women carry banners and posters of Ayatollah Khomeini and gather in protest at 24 Esfand Square, where a statue of the Shah stands. 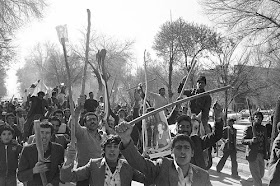 December 14, 1978: Supporters of Shah Mohammad Reza Pahlavi take to the streets en mass in Tehran following anti-Shah protests. Many of the monarchists clashed with their rivals and dozens were hospitalized as military-led vigilante bands roamed the streets. 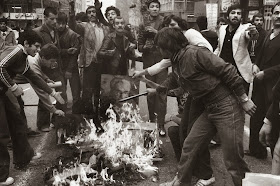 December 1978: Iranians in Tehran burn a portrait of the shah in protest against his regime. Thousands chanted “Long Live Khomeini” and “Death to the Shah.” 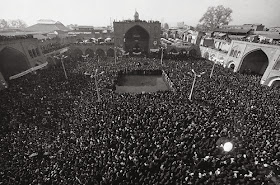 January 15, 1979: 100,000 Iranians gather in front of the mosque inside the Tehran Bazaar for a massive rally against the Shah. Troops stood by as demonstrators showered them with flowers, and kisses. 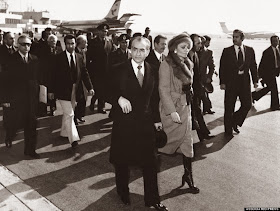 January 16, 1979: Shah Mohammad Reza Pahlavi and Empress Farah walk on the tarmac at Mehrabad Airport in Tehran to board a plane to leave Iran for Egypt. They would never return. 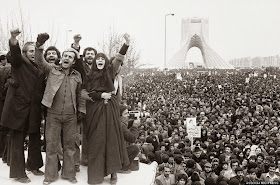 January 19, 1979: Days after the Shah's departure, over a million supporters of an Islamic republic assemble around the Shahyad Tower in Tehran. 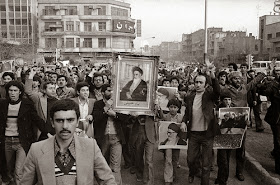 January 20, 1979: Demonstrators march through the streets of Tehran demanding the establishment of an Islamic Republic with Ayatollah Khomeini as its leader. 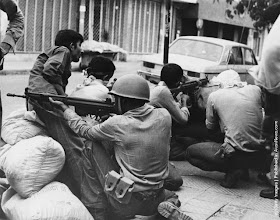 A gun battle in Khorramshahr, in southwestern Iran, during the Iranian Revolution, 1979. 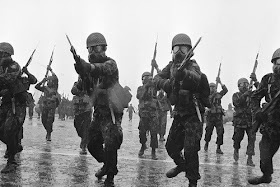 January 23, 1979: Iranian troops display anti-riot tactics during an exercise at military grounds near the Royal Palace in Tehran. Officers of the Iranian Armed Forces asserted that the army will stay united and that soldiers will "shed their blood" to maintain the monarchy and the nation's civilian government. 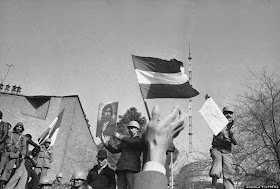 January 25, 1979: An Iranian soldier holds up a pro-Shah poster, while another holds a portrait of Imam Ali, son-in-law of Prophet Mohammad, as demonstrators in Tehran pass by waving the Iranian national flag. 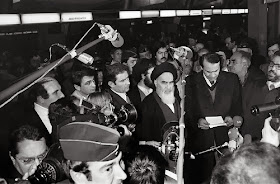 January 31, 1979: Iranian opposition leader Ayatollah Khomeini, exiled for over 14 years, gives a speech at Roissy airport near Paris before boarding an Air France flight to Tehran. 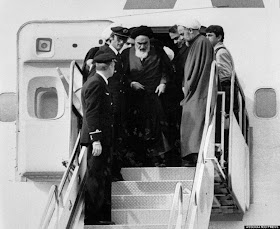 February 1, 1979: Ayatollah Khomeini emerges from the plane after his arrival at Mehrabad airport. 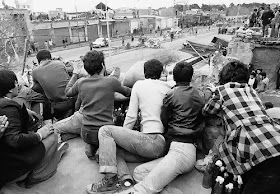 February 10, 1979: Revolutionaries, armed with weapons and Molotov cocktails stake out a rooftop in South Tehran and wait for army units to enter their roadblocked area. 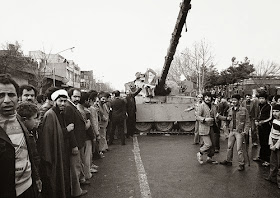 February 11, 1979: Anti-Shah protesters - civilian and clergy alike - place a picture of Khomeini on a captured tank in Tehran. 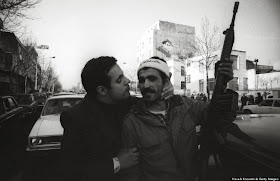 February 11, 1979: Two men with guns looted from army garrisons celebrate on the afternoon of the victory of the Islamic revolution in Tehran. 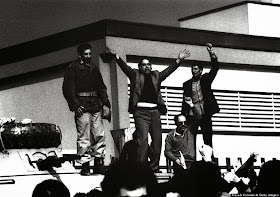 February 11, 1979: An army officer guarding the SAVAK (National Intelligence and Security Organization) headquarters in Tehran stands atop an armored personnel carrier, with three demonstrators, as a gesture of unity, on the afternoon when the army conceded and the Iranian Revolution was declared victorious. 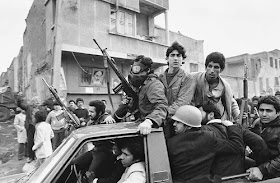 February 12, 1979: Armed rebels, one wearing a gas mask, ride in a truck near the Tehran headquarters of Ayatollah Khomeini. 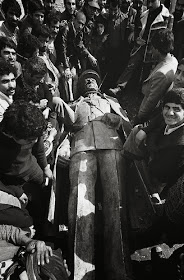 February 15, 1979: An old statue of the Shah, dragged to a spot near Khomeini headquarters, is a gathering spot in Tehran for followers of the Ayatollah Khomeini. 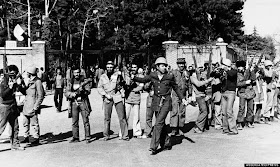 February 15, 1979: Troops loyal to Ayatollah Khomeini stand in front of the U.S. Embassy.. 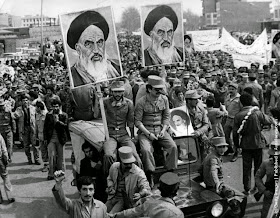 February 1979: The Iranian Islamic Republic Army, hoisting posters of Khomeini, demonstrates in solidarity with people in the street during the Iranian revolution.