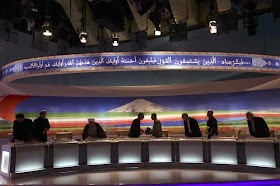 The Iranian presidential election, scheduled for June 14, is only one week away. As candidates jockey for endorsements, support and, ultimately, votes, a surprising frontrunner has emerged, according to a new university poll cited by Iranian media outlet Aftab News.

Hassan Rouhani, a former nuclear negotiator and current Secretary of Iran’s Supreme National Security Council, is now leading the pack of eight candidates with 23.3%. His closest competition is Tehran mayor Mohammad Bagher Ghalibaf, who garnered 18.4% in the survey, while reformist Mohammad Reza Aref stood at 14.3% and principlist Saeed Jalili – once widely considered the clear favorite – at a mere 7.5%.

Rouhani, a centrist in Iranian politics, is not only close to both former presidents Mohammad Khatami and Akbar Hashemi Rafsanjani in whose administrations he served, but also a trusted representative of Ayatollah Ali Khamenei, Iran’s head of state. A former parliamentarian, he holds positions on both the Assembly of Experts and the Expediency Council and is president of the Center for Strategic Research, an establishment Iranian think tank.

At the second of three presidential debates, held on June 5 and broadcast live on state television, Rouhani condemned government censorship and restrictions on social freedoms, including women’s rights. “Let people have more freedom,” Rouhani said, “Let’s not intervene so much in their lives. Cultural issues must be solved through culture itself. Police should be the last resort.” He also condemned the confiscation of satellite dishes from apartment building roofs as an “attack against people’s privacy,” and lamented, “We have created a policed climate.”

“The solution to the country’s cultural problems is to minimize the government’s interference and allow guild associations and experts to run their own affairs,” he declared, adding, “Women work but don’t enjoy equal rights. I’ll allocate special insurance for women and will form a women affairs ministry to return their trampled rights to them.”

Aref, a former Vice President with Master’s and Doctorate degrees from Stanford University, also chimed in with similar comments. The appropriate response to “cultural aggression isn’t censorship,” he explained, “but improving the quality of local productions.”

“An unprecedented security atmosphere has been imposed in recent years that caused lack of motivation among students,” Aref said. “The solution is not confrontation, elimination or shutting down. We are living in the age of communications. The solution is producing fine cultural works.” He also addressed the issue of censorship. “We should entirely minimize the state’s role in supervising art and cultural affairs. We should seriously work in diminishing government’s role in this sphere. Art and culture should be handed over to those who make art and culture,” he insisted, concluding, “The government must be at the service of culture, not dictate it to the people.”

Meanwhile, the more conservative candidates in the race variously declared their support for such things as internet filtering and gender segregation in universities. Jalili, for instance, responded to Rouhani’s comments about women’s rights by saying, “The main role for a woman is to be a mother. If we look at mother as a full time role to raise children properly, many social ills would be erased.”

The day before, June 4, Ayatollah Khamenei himself weighed in on the upcoming vote. ”A vote for any of these eight candidates is a vote for the Islamic Republic and a vote of confidence in the system and our electoral process,” he said, before adding some words of political wisdom. “Candidates shouldn’t make impossible promises. Speak in a way that if next year at this time you listen to a recording of yourself, or people do, you won’t be ashamed,” he said, in what Washington Post reporter Jason Rezaian called “an apparent reference to Ahmadinejad.”

This final week of campaigning is sure to bring more sniping and more surprises. The third and final debate, which focuses on foreign policy, will take place today, Friday June 7.

[UPDATE: Frud Bezhan and others over at Radio Free Europe/Radio Liberty provided extensive, blow-by-blow coverage of the debate, which they described as "lively, entertaining, and heated." Also, the intrepid Joanna Paraszczuk of EA Worldview has posted some highlights from the debate here. Wire services Reuters and Associated Press have also published preliminary debate coverage.]

Former Muftah editor Daniel Tavana, currently a research associate at the Project on Middle East Democracy (POMED), has put together a comprehensive primer on the upcoming presidential election, detailing the electoral processes, candidates’ platforms, pre-election political atmosphere in Iran, as well as areas of potential concern, including the curtailing of press freedom, intimidation, and censorship.

In other, perhaps more important news, the Iranian national soccer team defeated Qatar 1-0 in an important World Cup qualifying match on June 4. The single goal was scored by striker Rez Ghoochannejhad in the 66th minute off an assist by midfielder Mojtaba Jabari.

Highlights of the match can be seen here:

Next up, Iran plays Lebanon at Azadi Stadium in Tehran on June 11, just three days before the election. For more coverage of how soccer and politics often collide in Iran, read Holly Dagres’ recent report, published by Muftah earlier this week. 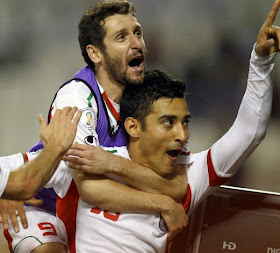