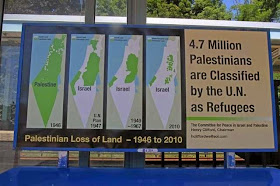 Hasbara outfit StandWithUs, as reported late last month, has placed its own billboards at Metro-North train stations in New York and Connecticut in an attempt to counter a much-discussed awareness campaign depicting the loss of Palestinian land over the past sixty-six years, paid for by Henry Cliffords' Committee for Peace in Israel/Palestine.

StandWithUs' counter-campaign, aimed at denying the validity of Palestinian ties to its own homeland by presenting the Old Testament as a divine land deed (in addition to lauding Israel's technological achievements and resurrecting the "no partner for peace" talking point), includes this ad:

No one disputes that Jewish presence in Palestine has been continuous since antiquity, albeit in varying degrees of population percentage whereby Jews often represented a very small minority of the total population of Palestine.  In 1517, when the Ottoman Empire seized control of Palestine, Jewish inhabitants of the region made up only 1.7% of the native population.  By 1882, Jewish Palestinians comprised 8% of the population.

When the State of Israel was unilaterally established in May 1948, after decades of massive Jewish immigration from Europe and Russia and months of the deliberate ethnic cleansing of indigenous Palestinian Arabs from their ancestral villages, the Jewish population of Palestine was still only about 30% of the total.

Regardless of population density and demographic distribution, of course, all inhabitants of the land should be granted the same human and civil rights and identical protection under the law.  The establishment of the State of Israel, a declaration by a minority of Zionist ideologues, destroyed any semblance of equality among the population of historic Palestine, with the minority Jewish population obtaining first-class citizen status in the nascent state and Jews worldwide gaining the ability to immigrate to a place they had never been.  Meanwhile, indigenous Palestinian Arabs were aggressively stripped of self-determination and sovereignty and prevented from returning to the homes and places of birth from which they had been violently expelled, in direct contravention of international law.

No historic connection to a land that has been home to countless tribes, cultures and communities over the course of millennia can ever excuse the deliberate, systematic and institutional discrimination against an indigenous people merely because they happen to be adherents to the "wrong" faith.

But this particular billboard is even more dishonest as one reads further.  It claims, "Ancient Israel was renamed 'Palestine' by the conquering Romans in 135 CE."  This is a common refrain, trotted out time and again by those who try to deny the existence of an indigenous Palestinian people.  The point is to present a version of history whereby the term "Palestine" was fabricated out of thin air by an imperial occupying power and applied to an entire region of land that was formerly populated and controlled solely by ancient Hebrews.

This claim demonstrates a distinct lack of historical knowledge and deliberate denial of known and verifiable facts.  As I noted a year ago, when The Committee for Accuracy in Middle East Reporting in America (CAMERA), a media pressure group and Zionist advocacy organization, bullied The Los Angeles Times into issuing a correction based on false information, specific references to "Palestine" date back nearly six hundred years before the 2nd Century CE.

In the 5th Century BCE, Herodotus, the first historian in Western civilization, referenced "Palestine" numerous times in his chronicle of the ancient Greek world, The Histories, including his documentation that "the coastal parts of Syria...and all that lies between it and Egypt is called Palestine." (VII.89, trans. Henry Carter, Heritage Press, 1958)

Furthermore, the name Palaestina was not of Greek origin, but has even more ancient roots.  According to the late University of Chicago professor Gösta Ahlström in his seminal book The History of Ancient Palestine, "Clearly Herodotus did not invent the name but used an already common term," derived from the Akkadian, Hebrew, Aramaean, and Egyptian words for Philistines.  "Herodotus' use of the term shows that its content had expanded in the Persian period and that it referred to the people of the coastal areas from Gaza to Carmel," explains Ahlström.

A century after Herodotus, Aristotle affirms the commonality of the term when, in his Meteorology, he describes the Dead Sea as "a lake in Palestine, such that if you bind a man or beast and throw it in it floats and does not sink." (II.3)  The mid-4th Century Periplus of Pseudo-Scylax, an obscure geographical journal and circumnavigation manual of the ancient world (and most likely of Athenian origin) details the Phoenician communities inhabiting the coast of Palestine and Syria, referencing by name the cities of Joppa (Jaffa), Dor (Dora), and Ascalon (Ashkelon).

In the mid-2nd Century BCE, ancient geographer Polemon wrote of a "part of Syria called Palestine," while Greek travel writer Pausanias wrote in his Description of Greece of "the dates of Palestine." (9.19.8)

The name Palestine was also referenced in Roman literature well before 135 CE, when StandWithUs says the land was suddenly "renamed."

Even the Jewish philosopher Philo of Alexandria, writing around the third decade of the 1st Century CE, referred to "Syria in Palestine" as being inhabited in part by "the very populous nation of the Jews." (XII.75)

Perhaps the most well-known Jewish historian of the 1st Century is Josephus (c.37-100 CE), born and raised in Jerusalem, who was a military commander in Galilee during the First Jewish Revolt against the occupying Roman authority, a negotiator during the Siege of Jerusalem in 70 CE, and later wrote extensively of Levantine Jewish history. His The Jewish War, Antiquities of the Jews, and Against Apion all contain copious references to Palestine and Palestinians.

Towards the end of Antiquities, Josephus writes that he has documented historical events "from the original creation of man, until the twelfth year of the reign of Nero, as to what hath befallen the Jews, as well in Egypt as in Syria and in Palestine" and beyond. (XX.11.2)

While the StandWithUs Metro-North billboards seek to establish the notion that "Ancient Israel" was exclusively Jewish and the direct precursor to the modern State of Israel, historical fact does not bear this out.  According to the Oxford Classical Dictionary, Palestine during antiquity was a "demographically mixed region" that was "understood to be the homeland of the Jews throughout the period, though in fact housing a minority of them." It continues, "More precisely, the Jews belonged to the small area around Jerusalem known in Greek as Ioudaia, whence the name Ioudaioi."

Also, historian Gösta Ahlström notes that, while Palestine long referred to the region south of Carmel, including "the Jezreel Valley, the Beth-Shan Valley and Pella down to Raphia in the south and the western part of Transjordan south of Pella to the Dead Sea in the east," the term "Canaan" was also used in antiquity to refer to "the lowlands and the coastal area of Palestine," a region in which "the largest ethnic group was non-Semitic."  Moreover, "Canaan was a name for the more densely populated areas of the land, where the cultural and urban centers were located.  The central hill country did not really count, because it was very sparsely settled."  This "central hill country," Ahlström tells us, "was probably called Israel."

The term Palestine was long used by Roman authorities to refer to the region, as evidenced by the establishment of the Limes Palaestinae, or frontier border of Palestine, in 70 CE following the siege and destruction of Jerusalem by Titus, son of Roman emperor Vespasian.

The claim that the Roman emperor Hadrian officially changed the name of the region to "Syria Palaestina" or simply "Palestine" in a spiteful effort to punish Jewish inhabitants of Judea after the Bar Kokhba Revolt in 135 CE and forced the native Jewish community into exile is also dubious, if not wholly erroneous, especially when, by that time, the terms "Syrian Palestine" and "Palestine" had already been in common use for over six hundred years and Romans were not in the habit of exiling entire native populations from lands they occupied and administered.

Ahlström adds, "In the Roman period, the understanding of the name Palestine had widened and included also the interior; thus it was natural that Palestine became the official name for their provinces after 135 CE."

In its attempt to counteract the simple truth of Henry Cliffords' maps campaign at Metro-North stations, StandWithUs has revealed not only its shabby knowledge of the history of the region, but also demonstrates its clear disinterest in advocating for the implementation of equal rights and international law in historic Palestine.

Some of this post was either excerpted or adapted from an earlier article of mine from September 29, 2011.

August 11, 2012 - Commenter "FreddyV" over at Mondoweiss points out another wholly dishonest aspect of the StandWithUs poster that I totally meant to address but forgot to include.

The image depicted on the billboard of a relief of the honorific Arch of Titus in Rome, is often described as proof that the Jews of antiquity were exiled from their homeland following the siege, sack, and destruction of Jerusalem in 70 CE. (Note how StandWithUs even associates the "renaming" of Palestine and supposed "exile" of Jews with an event totally unrelated to and occurring 65 years after the events depicted on the relief.) 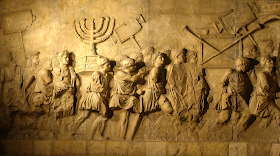 But that's not what the relief shows. In fact, the procession seen above is not of Jews being expelled, but rather of Romans themselves plundering the city. The menorah, trumpets and other spoils are being carried away in triumph by the victors. However, hasbara groups like StandWithUs would have you believe that these are defeated natives, tragically taking their belongings into exile.

But they're wrong. That's actually what this shows: 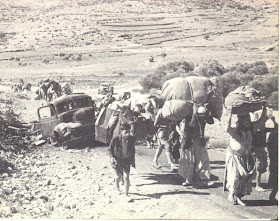