The Invisible Dead and "The Last Word":
Lawrence O'Donnell 'Rewrites' the Occupation of Afghanistan 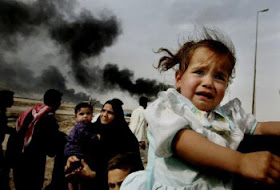 "It is my conviction that killing under the cloak of war is nothing but an act of murder."

On Saturday August 6, 2011, a U.S. military Chinook transport helicopter was shot down in Afghanistan, killing 30 American soldiers, including 17 elite Navy SEALs, and eight Afghans. The mainstream news media was awash with somber reports about this being the "deadliest day" for U.S. forces in the ten years since the invasion and occupation of Afghanistan began.

Notably, many news outlets such as ABC, NBC, CBS, and The Washington Post claimed the helicopter crash and its 30 American casualties marked the "deadliest day of the war", without adding the vital qualification, "for United States military personnel." Even the progressive website Truthout provided its daily email blast that day with the headline: "Deadliest Day in Decade-Long Afghanistan War: 31 Troops Killed in Shootdown."

The obvious implication of these reports was that on no single day since October 7, 2001, when the U.S.-led invasion and bombing campaign began, had as many people been killed in Afghanistan as on August 6, 2011.

Perhaps most brazen and sanctimonious regarding this claim was MSNBC's primetime anchor Lawrence O'Donnell. Introducing the "Rewrite" segment of his Monday August 8 broadcast of "The Last Word", O'Donnell looked directly into the camera and, in his measured and most heartfelt serious voice, told his viewers:


"This weekend saw the worst single loss of life in the ten years of the Afghan War."

He was lying. Unless, of course, like so many Americans, O'Donnell doesn't count Afghan civilians as human beings worthy of being allowed to stay alive. In fact, the invisibility of the native population of Afghanistan is so ubiquitous in the American media, O'Donnell and his writers probably didn't even think they needed to acknowledge civilian death tolls at the hands of foreign armies. As General Tommy Franks, who led the invasions of both Afghanistan and Iraq, told reporters at Bagram Air Base in March 2002 when asked about how many people the U.S. military has killed, "You know we don't do body counts."

After showing a video clip of CIA Directer-cum-Defense Secretary Leon Panetta's statement that the helicopter crash served as "a reminder to the American people that we remain a nation still at war," O'Donnell took seven minutes of airtime to lecture his viewers about a country that has forgotten the hardships of warfare, due to the absence of a draft or rationing or war taxation. Clearly passionate and frustrated, he rhetorically wondered, "What kind of nation would need to be reminded that it is still at war?" He continued,

At this point, O'Donnell displayed photographs of some of the soldiers killed in the crash while delivering brief biographies, a sort of "Last Word" eulogy for the dead.

In his effort to tug at his viewers heartstrings, O'Donnell told us of one young soldier who had only "been in Afghanistan for less than two weeks." Another was described by his mother as "a gentle giant." A SEAL Team 6 member also killed in the crash, we were told, had a wife, a two-year-old son and a two-month old baby girl while another solider was survived by his pregnant wife and three children. O'Donnell eulogized one of the deceased servicemen by telling us of his personal history as a high school wrestler and his lifelong dream of becoming a Navy SEAL.

O'Donnell concluded the segment with the assurance that none of the family members of those soldiers who had died - as opposed to the million of Americans whose lives are totally unaffected by the ongoing occupation - needed any "reminding" that "we are a nation at war."