It's Pretty Easy Being Green in Iran:
A Photographic Rebuttal to Michael Ledeen's Lies 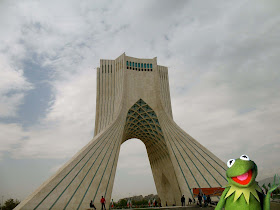 Claims that the Iranian government attempted to ban the color green (which had been appropriated by those opposed to the reelection of President Mahmoud Ahmadinejad) have yet to disappear completely from the public discourse. Just this week, a comment posted on Cyrus Safdari's excellent Iran Affairs blog asked,

"If the Green Movement was not a real movement that posed a fundamental threat to this regime then why did they BAN THE COLOR GREEN FROM THE FLAG? The continuing concern about the Green Movement by the regime PROVES the green movement's relevance and importance." (emphasis in original)

In addition to being patently absurd in its conception, the accusation that Iranian officials would feel so threatened by the protests and demonstrations which followed the June 2009 election that they would resort to chromatic censorship is completely devoid of fact.

Nevertheless, the claim was repeated again and again, but never more ridiculously than by career warmonger Michael Ledeen. In early March 2010, during a debate at the Atlantic Council alongside Flynt Leverett, Ledeen suggested that the prime example of the Iranian government's "charming wackiness" was that it "is now committed to the obliteration of 'green.' Very bad for Kermit the Frog."

Seemingly making it up as he went along, Ledeen continued:

"And so green is now banned from Iran. The opposition was writing revolutionary slogans on the money in green ink – that is banned. You can't wear green. I'm wearing green today as a sign of solidarity with them.

"But the funniest is that there are streets in Tehran – as I'm sure you've seen – which have green stripes on them to tell you where you can park and where you can't, and there are now teams of people out spraying black on top of the green because you can't have green. That is not a self-confident and stable regime, Flynt. These are people who are scared to death even of a bit of colored paint on a sidewalk."

Quite simply, Ledeen, who currently lends his aggressive Islamophobia and Israel-apologia to the neoconservative D.C. think tank Foundation for Defense of Democracies as its "Freedom Scholar" (whatever that means), was lying. During the debate, Ledeen referred to himself as "an historian" and claimed that "the Islamic Republic is based on hatred of America; a desire to destroy or dominate us along with all the other infidels," neither of which are true, but demonstrate clearly both Ledeen's high opinion of himself and contempt for Iran and its revolution.

To his credit, Flynt Leverett, who had recently returned from a trip to Iran, addressed Ledeen's bogus assertions. "I can tell you, just back from Tehran, I don't know where these stories about green being banned in Iran come from," he said. "Excuse me, green is one of the colors of the Iranian flag. There is no shortage of green in Tehran or in the Islamic Republic. We can tell stories; we can take comfort in certain kinds of stories; but look at facts. Look at on-the-ground reality."

Less than a month after that debate, I was lucky enough to explore that very on-the-ground reality myself when I spent three outstanding weeks traveling around Iran that Spring. To say that there is "no shortage of green" in Iran is a gross understatement. The color is ubiquitous, as is seen in some of the pictures I took in various Iranian cities.

The claim that the green stripe of the Iranian flag was removed (or replaced by a blue one) is so silly that it should be discounted out of hand (and not only because the colors of the flag - green, white, and red - are officially mandated in Chapter 2, Article 18 of the Iranian Constitution). 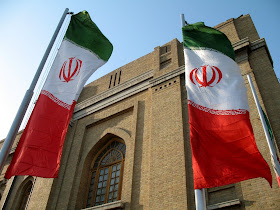 Ledeen's claim that Iran's green-striped curbs were being blacked-out? A lie. 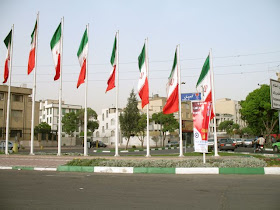 Even the highway signs in Iran are green, just as they are here in the United States. Uh oh, creeping Sharia! 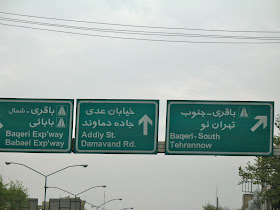 In Tehran, highway tunnels and overpasses are sometimes even lit with green lights. Clearly, the city electricians are Mousavi supporters.


The same goes for city employees like street-cleaners and lawn-mowers, all of whom wear green jumpsuits with light green reflectors. 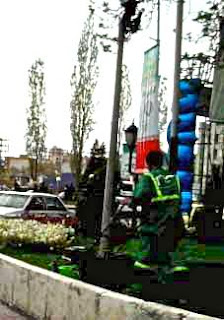 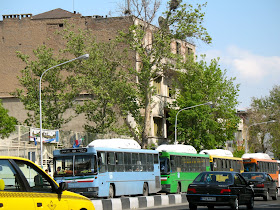 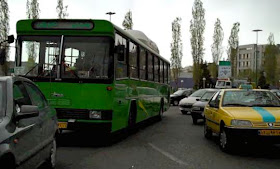 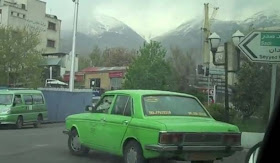 It comes as no surprise to longtime Iran-watchers that the former U.S. Embassy in Tehran should subvert the color boycott by sporting green borders on its murals. 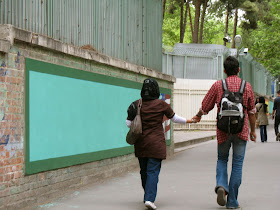 This building in Shahriyar is undoubtedly the scourge of Iran's ruling clerics: 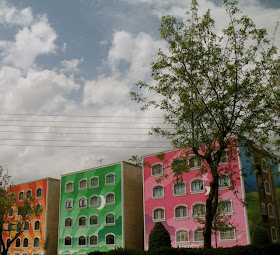 And this mosque, outside the holy city of Qom, must surely watch its back for using banned lightbulbs: 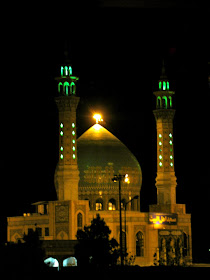 Check out the dome of this mosque in the city of Varamin, south of Tehran. Despite the mosque's clear allegiance to the Green Wave, official election results show that Ahmadinejad won this town with 73% of the vote. 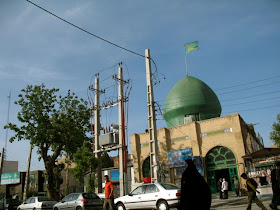 In the beautiful Iranian city of Shiraz, a statue of the revered poet Sa'adi at the famed Qu'ran Gate, is lit with alternating colored lights. One of them is a particularly dissident shade of green. 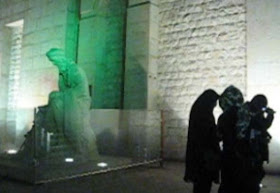 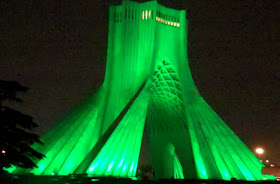 Nothing says "Death to the Dictator" more than wearing a "banned" green wedding dress on your special day... 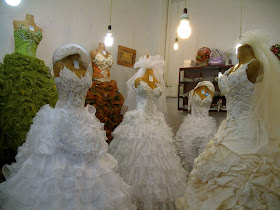 ...except perhaps donning that slinky Karroubi-inspired piece of outlawed lingerie on your wedding night! 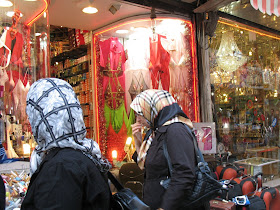 Finally, if Ledeen's claim were actually true, my own young cousin should be hailed for her brazen defiance and stalwart bravery in sitting on a stoop in public, courageously brandishing her mother's badminton racket. 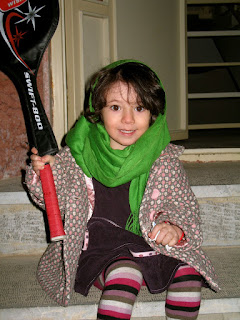 Constantly having to fabricate absurd falsehoods about Iran in order to consistently fear-monger and advocate regime change is no small feat. As such, it ain't easy being Ledeen.

All photographs and video ©Nima Shirazi (except Kermit, of course)