Anchors Away!
The 'Stability' of U.S. Puppet Dictatorships 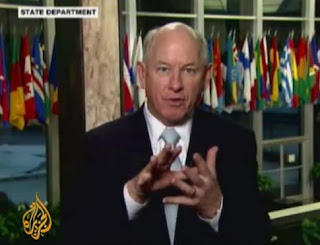 I've been beating up on State Department spokesman P.J. Crowley lately, first over his disingenuous support for freedom of the press as the U.S. cracked down on WikiLeaks and more recently over his amazing ability to say nothing while being asked direct questions about the illegality of Israeli colonization of the Palestinian land.

So why stop now?

Speaking on Al Jazeera English today, Crowley addressed the massive protests seen in Egypt over the past few days. Crowley urged "restraint on both sides," which has been a boilerplate refrain for State Department spokesmen and their boss, Hillary Clinton, when addressing turmoil all over the world, from China to Israel and Palestine. Recently, during a January 7, 2011 press briefing, Crowley stated that the United States wanted "to see restraint on all sides" in Tunisia. A week later, Clinton released a statement concerning the "several weeks of demonstrations and popular unrest" in Tunisia which "condemn[ed] the violence and urge[d] restraint on all sides."

Unsurprisingly, however, the State Department did not urge protesters and rioters in Iran to show restraint in the wake of President Ahmadinejad's June 2009 re-election.

Yesterday, in a press conference, Secretary Clinton said, "We support the fundamental right of expression and assembly for all people and we urge that all parties exercise restraint and refrain from violence," adding, "But our assessment is that the Egyptian government is stable and is looking for ways to respond to the legitimate needs and interests of the Egyptian people."

In his televised interview today, Crowley also repeatedly referred to the Egyptian government as "an ally and friend of the United States," as well as a "partner" and "stabilizing force in the region."

Yet, one thing Crowley said stuck out among the repetitions. At one point, he called the Mubarak government "an anchor of stability in the Middle East." This phrase is strikingly reminiscent of what President Jimmy Carter said thirty-three years earlier with regard to the unflinching U.S. support, both vocal and material, of the Shah of Iran's brutal dictatorship.

How To Say Nothing Without Really Trying:
State Dept. Spokesman Stonewalls on Settlement Stance 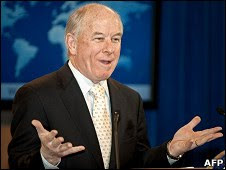 "It is true that How not to do it was the great study and object of all public departments and professional politicians all round the Circumlocution Office."

On Wednesday January 18, at 1:51PM, a master class in American obstructionism, political spin, question-dodging, the zombie-like repetition of non-committal and meaningless talking points was held by United States State Department spokesman P.J. Crowley. When asked by journalists about a new United Nations Security Council resolution draft condemning Israel for its continuing colonization of Palestinian land during the daily press briefing, Crowley managed to avoid giving even a single straight or substantive answer to many of the questions, demonstrating once again the U.S. government's outright refusal to be honest about anything related to Israel.

The brilliance of Crowley's performance as a whole might best be summed up by the following statement he made, which came about in the middle of the lengthy exchange between the spokesman and numerous State Department correspondents:

In truth, Crowley's verbal acrobatics speak for themselves and require very little commentary to demonstrate the boundless energy expended by the U.S. government to protect Israel from any public scrutiny. As such, the conversation will be presented in all its glory at the bottom of this post.

Last week, following similar statements by representatives of Brazil, Argentina, Uruguay, Bolivia, Ecuador, and Chile, the Foreign Ministry of Guyana declared that its decision to recognize Palestine was based on "Guyana's long-standing and unwavering solidarity with, and commitment to, the just and legitimate aspirations of the people of Palestine for the exercise of their right to self-determination and to achieve a homeland of their own, independent, free, prosperous and at peace." Paraguay and Peru are expected to recognize a Palestinian state in coming weeks.

During his first official visit to Palestine a few days ago, Russian President Dmitry Medvedev reaffirmed Moscow's commitment to an independent Palestinian state. "We have supported the establishment of an independent Palestinian state with east Jerusalem as its capital since the last century, and we still support it," Medvedev said, speaking in the West Bank town of Jericho.

In response to these recent developments, Ha'aretz reports that "a British Foreign Office minister said Thursday that only direct Palestinian-Israeli negotiations can achieve peace, adding that the U.K would not recognize a unilaterally declared Palestinian state." Parliamentary Under Secretary of State Alistair Burt, while in Jordan today, said that London could not "recognize a state that does not have a capital, and doesn't have borders."

Yesterday, I had the pleasure of being interviewed by the inimitable Scott Horton on Antiwar Radio about my recent article, The Phantom Menace: Fantasies, Falsehoods, and Fear-Mongering about Iran's Nuclear Program.

Our discussion (consisting mostly of me rambling on and on, and Scott graciously and patiently waiting for me to stop talking) ranged from, as Antiwar describes, "the numerous failed predictions – primarily by the US and Israel – of Iran's imminent creation of a nuclear weapon; how the latest Israeli estimate of a 2015 Iran nuke is explained, not by a longtime mistaken assumption about Iran’s nuclear intentions, but by the effectiveness of sanctions, espionage and assassination; the vastly overstated Iranian 'breakout' capability that could also be ascribed to well over 100 other countries; Israel's genuine concerns of an emboldened Hezbollah and a 'brain drain' of educated Israelis migrating to the US and Europe; and how Iran's leaders are portrayed by Western media as irrational 'mad mullahs' who want to destroy the world and can't be reasoned with."

The full audio of our conversation is below. Enjoy.

In November of last year, the Campaign for Peace and Democracy issued a petition regarding U.S. foreign policy toward Iran and has since garnered the signatures of a great many respected academics, activists, journalists, and others. Since the letter was published in The Nation it has received even more attention and endorsements.

This letter was forwarded to me by a number of people over the past couple months. I have consistently declined to add my name to the list of signatories. Here's why:

Although most of the content is fine (and parts are far better than most Iran-related letters out there), there are some glaring problems in the CPD petition that make it impossible for me to endorse. The biggest problem, as usual, is the letter's presentation of the specifics regarding June 2009. The letter states that in June 2009, "hundreds of thousands, possibly millions, took to the streets to demand their democratic rights." Which rights were they demanding, pray tell? If this was the right to elect a president by popular vote, that right was fully exercised by the Iranian people, as pre-election polls and public opinion predicted - almost perfectly - the results of the June 12, 2009 vote. Absolutely no evidence of voter fraud or of a stolen election has ever been found. The Mousavi campaign, for example, had 40,676 registered poll observers on election day. Ahmadinejad had 33,058. These observers spent all day monitoring polling stations and closely watched the vote counting after the polls closed. To date, not a single one of Mousavi’s registered observers has claimed to have been turned away or prevented from observing. Additionally, not a single representative has come forward alleging vote tampering or disputing the vote count totals at his/her polling station.

As analyst Eric A. Brill has pointed out:

Shortly after the election, Mousavi claimed in his newspaper (Kaleme) that 10 million people had voted without showing proper identification, but his complaint to the Guardian Council mentioned only 31 such voters. Widespread ballot-box stuffing was alleged, but not a single stuffed ballot box has been identified. Wholesale buying and selling of votes was alleged, but Mousavi has identified only four instances, in each case without any evidence. Thousands or millions of Mousavi votes were said to have been thrown away, replaced by thousands or millions of Ahmadinejad votes, but no one has identified any of the perpetrators, nor mentioned exactly where or how this was accomplished. Vote counts from the field, approved by tens of thousands of Mousavi's observers, were said to have been altered by the Interior Ministry in Tehran, but no one has identified a single ballot box where this occurred – even though the data have long been available to compare the counts for all 45,692 ballot boxes. The silence of Mousavi's polling station observers is especially deafening. Most or all of them may believe that electoral fraud occurred all over Iran, but apparently each is equally adamant that it did not occur where he spent election day.

This myth should really be put to rest by now and not continuously trumpeted by the American peace movement, as all available facts run counter to this accusation.