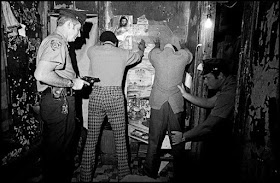 If one were to approach New York Times-reading liberals circa 1990 and tell them about a crime-fighting policy that arbitrarily harassed black and Latino youths who had committed no crime and threw the book at low-level nonviolent offenses, they would be rightfully outraged at the idea. But, if one were to couch this exact policy in pseudoscience promoted by mercenary sociologists and glowingly written up in The Atlantic, these same liberals would not only accept it, they'd be its primary advocates.

This is that story. This is the story of how the racist pseudoscience of Broken Windows and Stop-and-Frisk that started on the rightwing fringes slowly seeped into the centrist and liberal media and how two new racist pseudosciences, predictive policing and high profile "gang raids", are – again, with the help of liberals – taking their place.

We are joined this week by Josmar Trujillo.

Josmar Trujillo is a writer and organizer based in New York City. He has organized around education, disaster recovery and policing. He currently organizes with the Coalition to End Broken Windows and New Yorkers Against Bratton. He has written for the Village Voice, New York Daily News, Newsday, Fairness & Accuracy in Reporting, and In Justice Today.