Alan Dershowitz Invented a Scary Quote to Fear-Monger About Iran 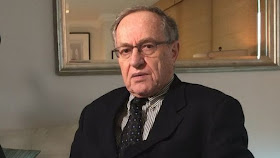 Alan Dershowitz is a liar.

This is not news, of course. His shoddy scholarship and penchant for plagiarism is well-documented. His relentless and tedious self-promotion, let alone his obsession with celebrity - others', as well as his own - is crude, shameless, and pathetic. His virulent Islamophobia has led him to advocate on behalf of torture and in favor of the Muslim ban. He's defended Trump adviser and white nationalist Steve Bannon and Trump himself on the issue of obstruction of justice. In his unwavering crusade to defend Israeli apartheid and advocate for a military assault on Iran, Dershowitz will sink to whatever depths he can suck breath long enough to reach.

His anti-Iran propaganda not only routinely consists of a catalog of lazy tropes, but, in order to justify his alarmist proselytizing, he also just makes shit up. This goes quite beyond the common political and media practice of deliberately misreading or mistranslating things Iranian leaders say; indeed, Dershowitz's bottomless mendacity includes the manufacturing of supposedly sinister sounding quotes by Iranian politicians.

Earlier this year, in a commentary first published by the hawkish, neoconservative Gatestone Institute - and syndicated in right-wing outlets like Fox News and the Jerusalem Post - he did just that.

In the article, Dershowitz used the hyped-up threat of North Korean nukes to fear-monger about Iran and argue that Congress empower the sociopathic, know-nothing commander-in-chief of the United States to launch a first-strike against Iran if it crosses certain "red lines." He also insists that "Congress should now enact legislation declaring that Iran's reaffirmation that it will never 'develop or acquire nuclear weapons' is an integral part of the agreement and represents the policy of the United States," despite the fact that Iran already regards that commitment as long-standing state policy, fundamental to the 2015 accord, and merely a reiteration of its obligation as an original signatory to the Nuclear Non-Proliferation Treaty.

Nevertheless, to make his flimsy case, Dershowitz relies on psychoanalyzing Iranian leaders and determining that - presumably because they're Muslim, are unsupportive of Israeli colonization and occupation in Palestine, and he doesn't like them - they aren't trustworthy and don't regard international agreements they've negotiated, signed, endorsed, and complied with as "legally binding."

Iran is "in the process of upgrading" its missile capability, Dershowitz claims, "and making them capable of delivering a nuclear payload to our shores." This is literally untrue. He also declares that Iran's "fundamentalist religious leaders would be willing to sacrifice millions of Iranians to destroy the 'Big Satan' (United States) or the 'Little Satan' (Israel)," adding for good measure that "[t]here is nothing more dangerous than a "suicide regime" armed with nuclear weapons."

This is a neocon canard about Iranian leadership - the 'martyr-state myth' - which holds that the "mad mullahs" of Tehran are both genocidal and suicidal, so eager to bring about Armageddon and so blindingly hostile to the United States and Israel that they will instigate a nuclear apocalypse, guaranteeing the deaths of millions and ensuring the complete annihilation of all Iranians, in order to reach their maniacal goals and reap the heavenly rewards. This concept is totally asinine, born of Orientalist bigotry, yet has held sway over the weak minds of Iran hawks for at least a decade, either as a genuine belief or merely a cynical rhetorical device.

To drive his point home, however, Dershowitz relies on his favorite anecdote about former Iranian president Akbar Hashemi Rafsanjani, who died this past January. Here's what he writes:


The late "moderate" leader Hashemi Rafsanjani once told an American journalist that if Iran attacked Israel with nuclear weapons, they "would kill as many as five million Jews," and that if Israel retaliated, they would kill fifteen million Iranians, which would be "a small sacrifice from among the billion Muslims in the world." He concluded that "it is not irrational to contemplate such an eventuality."

Dershowitz has referenced this story numerous times before to argue that Iran and its "suicidal leaders" pose an "existential and immediate" threat to Israel. It surfaces in both Preemption, his 2006 book dedicated to justifying war crimes, which The Guardian aptly described as "dangerous, muddled nonsense," and his 2015 book, The Case Against the Iran Deal, an extended and recycled whine against successful diplomacy.

Dershowitz, a cable news fixture, trotted out the same claim during a CNN debate about Iran on February 25, 2015, insisting that Rafsanjani "said if Iran gets nuclear weapons and bombs Israel, it will kill 3 million to 5 million Jews. Israel will retaliate to kill 10 million to 20 million Muslims, and the tradeoff would be worth it because it would destroy Israel and it would leave Islam untouched."

He also referenced the same tale in a March 23, 2010, commentary in the Wall Street Journal in which he predictably likens Iran to Nazi Germany and President Barack Obama to Neville "Appeasement" Chamberlain.

Dershowitz's lies flow from the very beginning of the op-ed. "There are several ways in which Iran could use nuclear weapons. The first is by dropping an atomic bomb on Israel, as its leaders have repeatedly threatened to do." In fact, Iran has literally never threatened to do anything remotely like this, especially because - again - they've always maintained that their internationally safeguarded, civilian nuclear program is for peaceful, energy-producing purposes only. Even if one doubts Iranian intentions, claiming they've made nuclear threats when they've done precisely the opposite for decades is pathetically dishonest.

Then, to provide a seemingly credible example of the maniacal nature of Iranian officials, it's time for the Rafsanjani anecdote again. This time around, Dershowitz wrote:


Hashemi Rafsanjani, a former president of Iran, boasted in 2004 that an Iranian attack would kill as many as five million Jews. Mr. Rafsanjani estimated that even if Israel retaliated with its own nuclear bombs, Iran would probably lose about 15 million people, which he said would be a small "sacrifice" of the billion Muslims in the world.

It's a damning story, no doubt, showcasing a callous leader with genocidal thoughts and little regard for human life.

But here's the thing: it's not actually true.

There is no record of a Rafsanjani statement of this kind. Not in 2004, not ever.

However, there is a 2001 Rafsanjani speech that has been routinely misread and manipulated by pro-Israel, Iran hawks to make Iranian policy sound causally genocidal.

On December 14, 2001, former president Rafsanjani delivered the traditional Friday sermon at Tehran University. It was the last Friday of Ramadan and the celebration of Quds (Jerusalem) Day in Iran, an official day of solidarity with Palestinians.

During the speech, Rafsanjani described Israel as an "outgrowth of colonialism and a multi-purpose colonial base," supported by both "the Americans and Britain," along with the United Nations and some "Islamic and Arab governments." Because "the survival of Israel depends on the interests of imperialists and colonialists," he said, "they have arranged it in a way that the balance of power favors Israel."

Speaking directly to the longstanding policy of ensuring Israel's overwhelming military superiority in the Middle East - what is known in U.S. foreign policy as Israel's "qualitative military edge" - Rafsanjani explained:


From a numerical point of view, it [Israel] cannot have as many troops as Muslims and Arabs do. So they [the United States and Great Britain] have improved the quality of what they have. Classical weaponry has its own limitations. They have limited use. They have a limited range as well. They have supplied vast quantities of weapons of mass destruction and unconventional weapons to Israel. They have permitted it to have them and they have shut their eyes to what is going on. They have nuclear, chemical and biological weapons and long-range missiles and suchlike.

If one day … Of course, that is very important. If one day, the Islamic world is also equipped with weapons like those that Israel possesses now, then the imperialists’ strategy will reach a standstill because the use of even one nuclear bomb inside Israel will destroy everything. However, it will only harm the Islamic world. It is not irrational to contemplate such an eventuality.

When read in context, Rafsanjani's point is clear. Far from issuing a threat against Israel, he articulates the motivations behind ongoing Western support for Israeli aggression and for guaranteeing Israel's sole possession of a nuclear arsenal in the region. It is a hypothetical posed to explain U.S and British efforts to maintain a gross power imbalance in the Middle East in service of their own interests. Beyond this, at no point does Rafsanjani suggest Iran will produce or obtain non-conventional weapons, let alone threaten to actually use them.

In fact, Rafsanjani is on record stating the very opposite. When he was president, Rafsanjani forcefully and repeatedly denied that the Iranian government had any interest in acquiring weapons of mass destruction. "We're not after nuclear bombs and we won't go after biological and chemical weapons," he said on March 23, 1997. In 2004, the very year Dershowitz claims Rafsanjani "boasted" about obliterating millions of human lives, Rafsanjani declared, "I absolutely offer the world the assurance that Tehran is not after nuclear arms."

So where did Dershowitz get all that "15 million vs. 5 million" crap? His bad information can be traced directly to a 2004 column by Suzanne Fields in the right-wing The Washington Times. Fields refers obliquely to the Rafsanjani speech cited above, but omits almost all of the actual words, in favor of creative paraphrasing that extrapolates creepy mathematical rhetoric to embellish, exaggerate and exploit the Iranian leader's point.

Here is Fields' version of this tall tale. See if you can spot the similarities to Dershowitz's own subsequent accounts:


In 2001 Hashemi Rafsanjani, the former president of Iran, speculated that in a nuclear exchange with Israel his country might lose 15 million people, which would amount to a small “sacrifice” from among the billion Muslims worldwide in exchange for the lives of 5 million Israeli Jews. He seemed pleased with his formulation.

Dershowitz apparently took Fields' word as gospel and ignored the primary source reporting on Rafsanjani's speech. In his his writing, Dershowitz turned Fields' propagandistic editorializing and complete misreading of Rafsanjani's quote into the quote itself.

Not only does Dershowitz conflate Fields' 2004 column with Rafsanjani's 2001 speech, he somehow imagines that Rafsanjani "boasted" directly to Fields, the "American journalist" he references, instead of addressing an assembled audience at Tehran University. Indeed, the word "sacrifice" never appears in the Rafsanjani speech, let alone in reference to what either Iran or "the Islamic world" would endure in order to annihilate Israel. That appears to be a flourish of Fields' invention, yet another attempt to link the concept of "martyrdom" with state policy, one picked up and repeated with relish by Dershowitz.

Alan Dershowitz is not merely a sloppy or biased researcher, cherry-picking and manipulating information to serve his ideological goals. He is not merely a serial plagiarist; he is a fabricator of evidence in a never-ending case for war against those who, by either their anti-imperial doctrine or mere inconvenient existence, dare challenge American and Israeli policy.

By virtue of his notoriety and self-promotion, however, Dershowitz still enjoys nearly limitless access to cable news platforms, where he continues to spout his nonsense. His editorials and books are still published without even the most cursory oversight of fact-checking by his editors and publishers.

Alan Dershowitz is a full-scale propagandist, for whom facts are irrelevant and lies remain the currency of his celebrity.