Pandermonium! At AIPAC, Trump Makes Same Promise on Jerusalem We've Been Hearing Since 1972 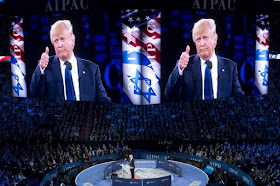 The news media is abuzz today with reports that, speaking before the American Israeli Public Affairs Committee (AIPAC) conference in Washington D.C. - the annual gathering of rabid right-wing Israel supporters - a presidential candidate vowed to move the U.S. Embassy in Israel from Tel Aviv to Jerusalem.

So who was it this time? Donald Trump.

"We will move the American Embassy to the eternal capital of the Jewish people, Jerusalem," he bellowed, reading from a script written for him by his son-in-law Jared Kushner, publisher of the conservative, pro-Israel weekly The New York Observer. Kushner took over the business from his father Charles, a real estate mogul and convicted criminal once described by The Jewish Week as "one of the marquee names in American Jewish philanthropy."

Promising to recognize Jerusalem as Israel's undivided capital and to move the American embassy there is part of Pandering 101 for Oval Office hopefuls. It is one of those litmus test talking points; the thing a politician says to prove the depths of his or her obsequiousness to a minuscule but influential cadre of donors and king (or queen) makers.

Every candidate in the past few decades knows this. It's an easy vow to make, and no one ever pays any political price for inevitably breaking it (since half of Jerusalem remains occupied territory and actually moving the embassy there would be a clear violation of international law (and long-standing U.S. policy, recently upheld by the Supreme Court), which doesn't recognize Israel's claim over the historic city). Making such an absurd promise plays well to the writhing masses at AIPAC confabs, establishes one's Zionist bona fides, and is a quick and easy way to offend indigenous Palestinians living under occupation, apartheid and blockade without actually flipping them the bird.

Nevertheless, the press continues to report on this blustery promise, no matter who utters it, as if it actually merits attention.

While he repeated the promise today for AIPAC, Trump had already said it back in January. And Ted Cruz has too (and even introduced legislation mandating the move in early 2015):

So has John Kasich (though, he's made clear that might not be his first priority when it comes to foreign policy):

And Jeb Bush before him:

And Ron Paul and Rick Santorum the same year before they dropped out of the race:

And Newt Gingrich and Michelle Bachmann (and Herman Cain) before them:

Unsurprisingly, both John McCain and running mate Sarah Palin made the promise back in 2008:

Even Barack Obama participated in this ritual before AIPAC, the day after clinching the Democratic Party nomination for president in June 2008:

Obama's statement was met with instant criticism and he wound up walking it back almost immediately. Five weeks after delivering those remarks, Obama effectively retracted them during an interview with CNN's Fareed Zakaria, saying, "You know, the truth is that this was an example where we had some poor phrasing in the speech. And we immediately tried to correct the interpretation that was given."

Four years earlier, John Kerry did the same (without the walk-back), while also touting his record of making similar demands during his tenure in the Senate:

(Supporters of moving the embassy were subsequently disappointed in Bush's failure to act on his promise.)

The year before, while beginning her campaign for New York's Senatorial seat, the then-First Lady Hillary Clinton weighed in on the matter herself: 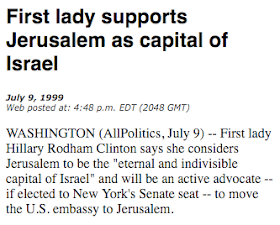 The next summer, as election day neared, Clinton repeated her pledge, adding that "the embassy should be moved from Tel Aviv before year's end."

Every Republican Party platform in the past 20 years has maintained the fiction that the embassy would be moved to Tel Aviv at the earliest convenience. The 1996 platform even vowed that the next "Republican administration will ensure that the U.S. Embassy is moved to Jerusalem by May 1999," while four years later the party promised that "the next Republican president will begin the process of moving the U.S. Embassy from Tel Aviv to Israel's capital, Jerusalem."

Before that, in 1992, the Clinton/Gore campaign hit the incumbent Bush administration for balking at the official recognition of "Israel's sovereignty over a united Jerusalem." Their campaign promised voters that "Bill Clinton and Al Gore will... support Jerusalem as the capital of the state of Israel."

Even Mike Dukakis tacked to the right of both the outgoing Reagan administration and George H.W. Bush campaign in 1988:

Al Gore, who tried to win the Democratic nomination for president that year, reportedly said in September 1987 that "he would consider moving the U.S. embassy from Tel Aviv to Jerusalem."

In April 1984, during a heated Democratic primary season, Walter Mondale and Gary Hart bent over backwards to assure voters in New York City that they too supported moving the U.S. Embassy from Tel Aviv to Jerusalem (a position even Israelis themselves understood as hollow political posturing).

The New York Times reported at the time:


Walter F. Mondale said he had supported such a move for 20 years, and he asserted that Senator Gary Hart had changed his position on the issue five days ago. In the past two weeks, Mr. Hart has denied that he suddenly changed his position, but has said his position has ''evolved.'' He has said firmly that if he became President, he would move the embassy to Jerusalem.

The Rev. Jesse Jackson is the only one of the three candidates who opposes moving the embassy. The Reagan Administration also opposes such a move because the status of Jerusalem has long been disputed and the United States does not support Israeli sovereignty over the city.

Despite efforts by New York Senator Daniel Moynihan and California Congressman Tom Lantos to introduce a bill mandating the move, Reagan was adamant about not relocating the embassy, as such a divisive policy would, according to his Secretary of State George P. Shultz, "be very bad for the United States" and "damage our ability to be effective in the peace process."

The pandering was so thick, however, that a month later the Reagan administration had to pretend to consider supporting the move in order to stave off losing votes in the upcoming election.

Though the bill eventually stalled, Los Angeles Times syndicated columnist Nick Thimmesch, who called the proposal "one of the dumbest ideas to be advanced in Congress this session," lamented that "some of the election-year pandering in the Republic verges on the obscene" and credited the ill-conceived gambit to the lawmakers' "blind obedience to the Israel lobby (American Israeli Public Affairs Committee)." That was October 3, 1984.

By 1986, another bill was introduced to move the embassy, this time brought to the Senate floor by segregationist Republican Jesse Helms.

During the 1980 presidential campaign, Reagan attacked the Carter administration for abstaining from a United Nations Security Council resolution condemning Israel's attempted annexation of East Jerusalem and calling upon all countries to remove their embassies from the city.

But even by the mid-1980s, though, this was an old political ploy. The New York Times pointed out that the 1976 Democratic Party platform - on which Jimmy Carter and Walter Mondale ran for office - declared:


We recognize and support the established status of Jerusalem as the capital of Israel, with free access to all its holy places provided to all faiths. As a symbol of this stand, the U.S. Embassy should be moved from Tel Aviv to Jerusalem.

Before that, on March 17, 1972, Michigan Congressman Gerald Ford, then the Republican Minority Leader, told a Zionist Organization of America regional meeting in Cleveland that the Nixon Administration should transfer the U.S. Embassy to Jerusalem.

Two years later, after first replacing Spiro Agnew as Vice President and then becoming President himself following Nixon's resignation, Ford backtracked on his previous position. "Under the current circumstances and the importance of getting a just and lasting peace in the Middle East, that particular proposal ought to stand aside," Ford said at his very first presidential press conference on August 9, 1974.

It's been over four decades since then and, sadly, while Palestine remains under brutal occupation, Israeli colonies continue to expand with impunity, and Palestinians are subject to ongoing oppression and violence, election-year pandering and blind obedience to the Israel lobby has become more obscene than ever.

March 22, 2015 - In his own grotesque AIPAC speech today, Ted Cruz reiterated his promise regarding moving the U.S. Embassy from Tel Aviv to Jerusalem.

"On my very first day in office," he declared, "I will begin the process of moving the American Embassy to Jerusalem, the once and eternal capital of Israel," using the AIPAC-approved epithets always used by fawning politicians to describe the historic city.
Nodding with acknowledgement of the fact that this vow is an repeated refrain for presidential hopefuls, Cruz sought to dispel any doubt that he would act on his illegal and immoral promise. "I recognize for years a whole bunch of presidential candidates, both Republicans and Democrats, have said that," he told the assembled Zionists. "Some have said that standing here today. Here's the difference: I will do it."

September 28, 2016 - During a meeting with Israeli Prime Minister Benjamin Netanyahu, who was in New York City for his annual propaganda stand-up routine before the United Nations General Assembly, Donald Trump again declared his intention, if elected president, to have the United States government officially "recognize Jerusalem as the undivided capital of the State of Israel." 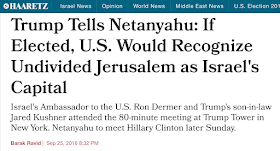 Such recognition would clearly violate both domestic and international law, as Israel's annexation of East Jerusalem in 1967 is considered illegal and illegitimate by the entire world, including the United States.

Trump's declaration - a common campaign promise by presidential hopefuls and constant refrain of AIPAC-funded Congressional blowhards - goes hand-in-hand with another absurd pledge routinely made by politicians: that the U.S. Embassy will be relocated from Tel Aviv to Jerusalem.

It's a pandering platitude signifying nothing. But what else should we expect from this gilded nightmare? 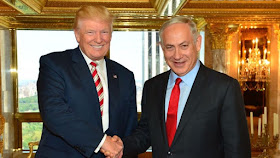