Following through on its ongoing commitment to encourage hysteria and beat the drums of war, The Wall Street Journal posted what appeared to be an alarming headline on Friday, just one day after the framework of a multilateral diplomatic accord between Iran, the United States, and five other world powers was announced.

Dick-swinging reports on big American bombs - namely the Massive Ordnance Penetrator (MOP) - are nothing new. Here are some others, dating back to 2008: 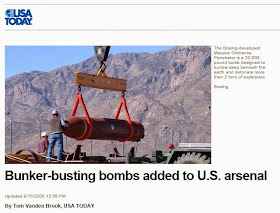 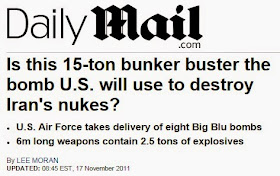 In 2011, Bloomberg News even published an infographic in which giant bombs penetrate the Earth's core in order to kill an elephant. 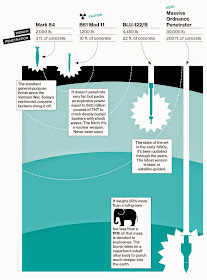 Around the same time, CNN reported that the bunker busting bombs so often touted in the media were not designed to be used against Iranian facilities:

Today, however, the issue was put to rest by an excellent post on Gawker by William M. Arkin.

"Only armchair amateurs (and bloviating idiots) think some 30,000 pound bunker buster is a war-winning silver bullet, or that it is even usable," writes Arkin. "And 'massive;—in an industrial sense—is so far off from what war planners really think about these days." He continues:


MOP finds its origins in the 21,000-pound Massive Ordnance Air Blast (MOAB) bomb, more affectionately known as the Mother of All Bombs, which starred for a moment more than a decade ago, when the mission was destroying Afghan caves and tunnels. It followed another weapon rushed forward to hit Saddam's bunkers in Gulf War 1, now almost 25 years ago.

So what's most important to understand is that these boutique bunker busters have always been in a rush to do something: panic, engineering challenge, hand-crafted, small amounts of money, and then OBE—overtaken by events.

Basically, after years of advancing, upgrading, improving, bulking up and so on, Arkin explains that the entire MOP program consists of "20 hand-crafted bombs that seem to play no more of a role than being fodder for people bloviating about Iran to cry war."

May 20, 2015 - Voilà! Zachary Keck of The National Interest to the rescue. To hell with the stupid old MOP... please welcome the HVPM (high velocity penetrating weapon)!

June 24, 2015 - The war crime fantasies about big American bombs blowing holes in Iran continues this week with a new installment in the MOP hero quest, this time written by Politico's unimpressive Michael Crowley. Boosting the false choice of successful nuclear diplomacy vs. U.S. military aggression, Crowley drools, "Think of it as Plan B for Iran. The failure of diplomacy might lead the U.S. to turn to a weapon finally ready for real-world action after years of design and testing."

Crowley's sinister description of Iran's legal nuclear infrastructure is matched only by his eagerness to see it bombed for no reason by the U.S. Air Force. Pathetic.

July 1, 2015 - As intended, a number of outlets picked up on Michael Crowley's latest paean to American bunker buster bombs, with Business Insider's Jeremy Bender doing most of the work. In two articles in the past six days, Bender has bolstered the notion that Iran will soon get pummeled by the infamous MOP.

Bender identifies what he calls "two huge problems" with the "Plan B" of dropping a gigantic bomb on a country for the crime of having a legal, safeguarded uranium enrichment program that poses zero proliferation threat. After calling the huge exploding device "awe-inspiring," Bender laments that the 30,000-pound bomb can't wipe Iranian scientists' brains off the map. He also seems disappointed that Iran might actually try to defend itself against such a blatant act of unprovoked aggression.

Both Bloomberg and CNN also jumped on the bunker buster bandwagon this past week.