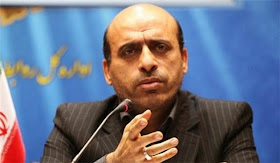 Whenever a certain cohort of conservative Iranian lawmakers feels frustrated with Western duplicity, arrogance, and bullying over Iran's nuclear program - usually due to patronizing demands made during negotiations, threats of new sanctions, or following the release of a biased IAEA report - they tend to do one of two things: they either suggest that Iran may pull out of the Nuclear Non-Proliferation Treaty (NPT) or they claim to be mulling the introduction of a bill requiring Iran to expand its uranium enrichment levels beyond what is necessary for a civilian energy and research program.

Some members of the Iranian parliament, known as the Majlis, have once again made the higher enrichment threat. As usual, this is all sound and fury, signifying nothing. The Majlis has no say over such decisions - which would be made exclusively by Iran's leader Ayatollah Ali Khamenei - so this is all just rhetoric.

On Sunday, January 25, 2015, Iran's English-language news outlet PressTV reported that Seyyed Hossein Naqavi Hosseini, spokesman for the Majlis' National Security and Foreign Policy Committee, told reporters that lawmakers were "working on a motion under which the government would be obliged to step up uranium enrichment utilizing new-generation centrifuges," a move made "in reaction to recent announcements by US lawmakers that Congress mulls more sanctions against the Islamic Republic."

Hosseini has a history of exaggeration, to say the least. For instance, last March, he claimed that the missing Malaysia Airlines Flight 370 (which had two Iranian citizens aboard) had actually been "kidnapped" by the United States in a dastardly attempt to "sabotage the relationship between Iran and China and South East Asia."

Furthermore, according to Hosseini, PressTV reported, "the Iranian parliament has another motion which will require the government to produce 60-percent enriched uranium in case the US Congress goes ahead with plans to impede the ongoing nuclear negotiations."

This claim was repeated by another committee member, Mohammad Hassan Asafari, during an radio interview. Asafari said these higher levels of enrichment would be triggered if any members of the P5+1 tried to "impose fresh sanctions" or is "reluctant to lift the previous sanctions."

But this old news.

This past September, we heard the same threat from the same source. 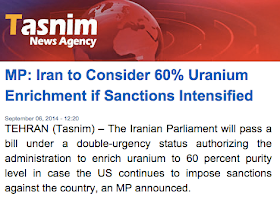 So, which "MP" was making such a statement? None other than Mr. Asafari.

A year ago, on January 12, 2014, Asafari told the press effectively the same exact thing.

"The Iranian nation will not bow to pressure and bullying," Asafari said, adding that "if the US Congress passes new sanctions against the Islamic Republic of Iran, [the] Majlis will move to accelerate the ratification of the bill obliging the government to produce 60 percent enriched uranium."

Well, December 2013 was full of these types of reports:

Within a couple weeks, Iranian political analysts were already denying that such a bill would ever actually pass, let alone be enforced.

Back in October 2012, Mansour Haqiqatpour, deputy head of the Foreign Policy and National Security Committee spearheaded the 60 percent enrichment initiative.

"In case our talks with the P5+1 group... fail to pay off, Iranian youth will master enrichment up to 60 percent to fuel submarines and ocean-going ships," Haqiqatpour said. "If these talks continue into next year," he continued, "Iran cannot guarantee it would keep its enrichment limited to 20 percent. This enrichment is likely to increase to 40 or 50 percent."

Obviously, this was an idle - and largely nonsensical - threat.

Nevertheless, we'll keep hearing this type of thing from legislators who like to act tough and hear themselves talk. Ignore them. Ignore news reports and partisan commentary taking them seriously.

Diplomacy is a slog, but it's working. Within six months, there will be a deal. Bluster like this, from all sides, will continue well after the ink is dry. Brush it aside. Relax. 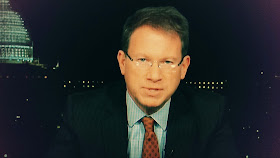 Speaking tonight to Charlie Rose about recent events in Paris, Jeffrey Goldberg said that "there is already tension between the Israeli government and the French government" over the issue of Jewish emigration.

During their conversation, Rose brought up comments made Sunday by Israeli Prime Minister Benjamin Netanyahu during a speech at Paris' Grand Synagogue. Netanyahu -- who reacted to the horrific massacre at the offices of satirical magazine Charlie Hebdo last week with predictable, opportunistic propaganda and then crashed the memorial march in Paris after French President Francois Hollande specifically asked him not to attend, petulantly elbowing his way to the front, before making an ass of himself a few more times -- spouted a recycled mish-mosh of some of his lamest hits: "The radical Islamists do not hate the West because of Israel; they hate Israel because it is an integral part of the modern world," he bellowed. "We cannot let Iran achieve nuclear capabilities. Israel stands with Europe, and Europe must stand with Israel."

But it was another part of Netanyahu's speech that has received the most attention. "Any Jew who chooses to come to Israel will be greeted with open arms and an open heart, it is not a foreign nation, and hopefully they and you will one day come to Israel," Netanyahu announced to the congregation of French Jews, before concluding his speech with the Zionist chant, "Am Yisrael Chai! Am Yisrael Chai!"

Previously, in a statement issued following the Paris attacks, Netanyahu was even less subtle about where he hopes the allegiances of people of Jewish descent lie: "To all the Jews of France, all the Jews of Europe, I would like to say that Israel is not just the place in whose direction you pray, the state of Israel is your home," he insisted. 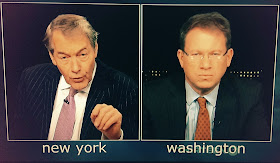 When Rose, who noted that Goldberg is very close with Netanyahu, asked his guest how the Israeli leader's comments were received, Goldberg said that French officials are "bothered" when Israeli officials call upon French citizens of Jewish heritage to leave their home and emigrate to Israel.

"The problem for France is that many, many Jews are going to Israel," he continued. "I've been traveling back and forth for months [and] I haven't met a single Jewish person in France who says that at least the thought is not at the back of his or her mind."

Though Goldberg's claim aligns with a front page article in the New York Times, what he didn't mention is the reaction Netanyahu himself got at the Grand Synagogue after finishing his remarks on Sunday. As can be seen on a video posted by Reuters (and elsewhere), the crowd broke into a spontaneous rendition of La Marseillaise -- the French national anthem -- much to the visible chagrin of the Israeli prime minister.

Netanyahu's comments, and similar ones made in the past, were also criticized by Rabbi Menachem Margolin, director of the European Jewish Association, the largest advocate for Jewish organizations and communities in Europe.

Margolin expressed his irritation that "after every anti-Semitic attack in Europe, the Israeli government issues the same statements about the importance of aliyah [Jewish immigration to Israel], rather than employ every diplomatic and informational means at its disposal to strengthen the safety of Jewish life in Europe."

The rabbi said that "every such Israeli campaign severely weakens and damages the Jewish communities that have the right to live securely wherever they are," reported Ha'aretz, quoting from an interview with NRG, an Israeli website. The "reality is that a large majority of European Jews do not plan to emigrate to Israel. The Israeli government must recognize this reality and also remember the strategic importance of the Jewish communities as supporters of Israel in the countries in which they live." he added.

Israel's government "must cease this Pavlovian reaction every time Jews in Europe are attacked," demanded Margolin.

But Goldberg didn't think that stuff was important to mention.

January 13, 2015 - Speaking today in Jerusalem at the funeral of the four French Jews who were killed in a kosher supermarket in Paris last week, Netanyahu again repeated his plea for Jews worldwide to identify with the State of Israel, the 67-year-old settler-colonial state built atop the ruins and corpses of Palestine, instead of the countries of their births and ancestry.

"Jews have the right to live in many countries, and it is their right to live in perfect safety, but I believe that they know deep in their hearts that they have only one country, the state of Israel, that will accept them with open arms, like beloved children," Netanyahu said. "Today more than ever, Israel is our true home, and the more numerous we are, and the more united we are in our country, the stronger we are in our one and only state."

Israel president Reuven Rivlin said much the same thing. According to New York Times correspondent Jodi Rudoren, Rivlin addressed Jews in France, saying that "we yearn to see you settle in Zion," not "due to distress, out of desperation, because of destruction, or in the throes of terror and fear," but rather because "the land of Israel is the land of choice — we want you to choose Israel because of a love for Israel."

The "land of choice" is clearly reserved only for some, as the indigenous people of the land and their exiled, occupied, imprisoned, and massacred descendants continue not to have much of a choice at all.