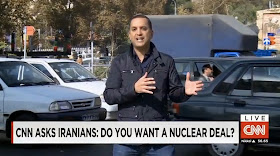 As he has in the past, CNN correspondent Reza Sayah recently took to the streets of Tehran to find out what Iranians really think of the prospect of a nuclear deal between their government and six world powers.

Setting up a camera in the uptown thoroughfare of Tajrish Square, Sayah asked passers-by if they support the current nuclear negotiations and would favor a comprehensive deal.  The results were unsurprising.

"I want peace," says a woman in dark sunglasses. "I want an agreement, so people can live in peace,"

"There is nothing wrong with having relations with America, as long as they don't use us," one man explains. Others note that, while sanctions have hurt the economy and unemployment remains high, Iran's rights to a peaceful nuclear program and domestic enrichment must be honored for a deal to work.

"Even if we give up our nuclear program, the other side will never accept it," says a young man. "Whatever happens, they think of something new."

"It's a game, a farce, and Iranians know this," a middle-aged woman declares.