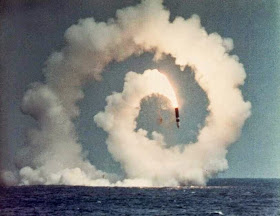 For years, Israeli politicians and their willing mouthpieces in the American press and punditocracy have maintained that Iran, in addition to feverishly working to build nuclear weapons, will have acquired the ability to affix an atomic bomb to an intercontinental ballistic missile (ICBM) capable of hitting the United States by the year 2015.

This claim eagerly exploited the boilerplate assessments of U.S. government agencies, such as the Department of Defense and Air Force intelligence, which not only date back over a decade, but also base their conclusions on unlikely scenarios.

In a recent Pentagon report, however, this assessment has finally changed, putting to rest this common alarmist talking point so often trotted out by those wishing to exaggerate - if not wholly invent - the threat posed to Israel and the United States by Iran.

"An unclassified executive summary of the Annual Report on Military Power of Iran, dated January 2014 and not previously reported, does not -- unlike past years -- offer an assessment of the technical feasibility of Iran's potential to demonstrate an ICBM capable of reaching the United States in 2015," reports Jason Sherman of InsideDefense.com. "Instead, the two-page executive summary states: 'Iran has publicly stated it may launch a space launch vehicle by 2015 that could be capable of intercontinental ballistic missile ranges if configured as a ballistic missile.'"

The assessment that such a vehicle could be reconfigured to deliver a nuclear warhead is the Pentagon's suggestion, not that of Iran's. To the contrary, Iranian leaders have routinely and explicitly insisted they will never seek to acquire nuclear weapons and are not developing long-range missiles.

This is certainly a break from the long history of Iranian ICBM hysteria. Back in 1993, a CIA estimate delivered to Congress claimed that Iran was "10 to 15 years" away from possessing the capability to "indigenously produce an ICBM" capable of hitting to continental United States. A 1995 National Intelligence Estimate, drawn from the conclusions of all 16 American intelligence agencies, similarly assessed Iran would have such long-range missiles by 2010. Three years later, in 1998, a Republican-sponsored commission on ballistic missiles - chaired by none other than then-former and future Secretary of Defense Donald Rumsfeld - concluded that Iran could "produce ballistic missiles with sufficient range to strike the United States" within five years.

Benjamin Netanyahu - then (as now) the Prime Minister of Israel - seized upon this assessment to bolster his own hawkish propaganda. On October 1, 1998, The Washington Times published an article headlined, "Iran's Long-Range Missile Plans Worry Netanyahu: Says U.S. Cities May Be Targeted."

"Iran is pushing ahead with a multibillion-dollar program to develop missiles capable of reaching American cities," the report cited Netanyahu as saying. Such missiles would soon be able "to reach the Eastern seaboard" of the United States, he added.

Similarly, U.S. intelligence assessments have, since 1999, consistently noted that, with the aid of foreign governments, Iran would acquire ICBM capability by 2015. For instance, a National Air Intelligence Center report from 2000 concluded, "With continued foreign assistance, Iran could have an ICBM capable of reaching the United States before 2015." This language was repeated verbatim in every subsequent Ballistic and Cruise Missile Threat assessment for the next decade.

While in September 2009, Reuters reported that the most recent "National Intelligence Estimate deemed Tehran unlikely to have a long-range missile until between 2015 and 2020," by April 2013, the Pentagon release yet another finding to Congress that read: "With sufficient foreign assistance, Iran could probably develop and test an intercontinental ballistic missile (ICBM) capable of reaching the United States by 2015."

In February 2012, Israeli Strategic Affairs Minister Moshe Yaalon declared that Iran was "getting ready to produce a missile with a range of 10,000 kilometers." Just weeks later, Israeli Finance Minister Yuval Steinitz - a Netanyahu acolyte and frequent Iran hysteric - said that Iran is "working now and investing a lot of billions of dollars in order to develop intercontinental ballistic missiles." He added that "we estimate that in two to three years they will have the first intercontinental ballistic missiles that can reach the east coast of America. So their aim is to put a direct nuclear ballistic threat... to Europe and to the United States of America."

On September 26, 2012, Iran attack enthusiast John Bolton opined, "Tehran is perilously close to achieving nuclear weapons and ballistic missiles for worldwide delivery," and called for an immediate military assault to stem the threat.

Later that year, in early December 2012, a Congressional Research Service (CRS) report on "Iran's Ballistic Missile and Space Launch Programs," cast doubt on the oft-repeated timeframe, noting, "It is increasingly uncertain whether Iran will be able to achieve an ICBM capability by 2015" and concluding that, in the absence of a deliverable nuclear warhead, "the proliferation of Iranian ballistic missiles is arguably not an imminent significant threat."

Shortly thereafter, on July 14, 2013, Netanyahu resurrected the claim, telling an obsequious Bob Schieffer on "Face the Nation" that Iran is busy "building ICBMs to reach the American mainland in a few years." Two and a half months later, before the United Nations General Assembly, Netanyahu declared that Iran is actively developing "intercontinental ballistic missiles," in order "to carry nuclear warheads," adding that "Iran is building now ICBMs that the United States says could reach this city [New York] in three or four years."

Despite their constant repetition by deceitful intelligence officials, uninformed politicians and agenda-driven journalists, in recent years these conclusions have been routinely dismissed by anyone with any knowledge of the actual intelligence. That Iran, which has never demonstrated any interest nor inclination to pursue ICBM capability, would acquire and test such technology by 2015 is not merely a gross exaggeration, it is an outright impossibility.

In 2001, the U.S. intelligence community revealed the truth behind their own reporting lexicon. The word "could" - so often utilized in alarmist assessments - actually translates to something closer to is unlikely to. "We judge that countries are much less likely to test as early as the hypothetical 'could' dates than they are by our projected 'likely' dates," stated a National Intelligence report entitled, "Foreign Missile Developments and the Ballistic Missile Threat.

In 2012, Paul Pillar, former CIA National Intelligence Officer for the Near East and South Asia, admitted, "The bottom line is that the intelligence community does not believe [the Iranians] are anywhere close to having an ICBM." A year ago, Greg Thielmann of the Arms Control Association noted, "Missile expert Michael Elleman of the International Institute for Strategic Studies has expressed doubts about whether an operational Iranian ICBM is even likely within the current decade."

Moreover, a November 2013 analysis produced by Elleman revealed that "neither the U.S. nor Israel cite evidence that Iran is actively developing or 'building' ICBMs." He also told journalist Gareth Porter, "I've seen no evidence of Iranian ICBM development, let alone a capability." In an October 2013 article on this very issue, Porter writes, "Iran has not even displayed, much less tested, a larger version of its existing space launch vehicle that would be a necessary step toward an ICBM, according to David Wright, co-director of the Global Security Programme at the Union of Concerned Scientists." Iran's current vehicle is suitable only for launching a small satellite into orbit, Wright told Porter.

The new Pentagon report is noteworthy for its focus on Iran's space launch vehicle, rather than any hypothetical or exaggerated ICBM work. Thielmann explains, "I would regard that as a significant change of language, meaning that the U.S. intelligence community is losing confidence in their earlier prediction of 2015 which has been very heavily quoted, of course, by friends of missile defense and others wishing to pump up the Iranian threat."

As nuclear negotiations continue to progress in Vienna toward their July 20 deadline, long-standing alarmist talking points about Iran's nuclear energy and defense programs continue to crumble.


The Iranian program has frequently been hyped in the past — by Iranians and non-Iranians. In 1998, a commission headed by Donald Rumsfeld — at the time out of government — declared ominously that Iran “now has the technical capability and resources to demonstrate an ICBM-range ballistic missile … within five years of a decision to proceed.”

Iranian officials insist they have no intention of building an intercontinental ballistic missile system — which would have a range of 10,000 kilometers (6,213 miles) and could reach the United States. Elleman pooh-poohed claims by Israeli officials, including Prime Minister Benjamin Netanyahu, that Iran was close to acquiring such technology. Elleman said Iran could develop an operational ICBM no earlier than 2020.

Iran, Elleman said, appears to be focused more on the “tactical benefits of ballistic missiles as opposed to the strategic” benefits accrued by having ICBMs. The Sajjil-2 and a one-stage missile, the Ghadr, which Iran has tested successfully, have sufficient range to hit Israel, which Iran hopes would deter an attack on its nuclear installations, he said.