The Not-So-Complex World of Michael Bloomberg:
When A White Person Does It, That Means It's Not Terrorism 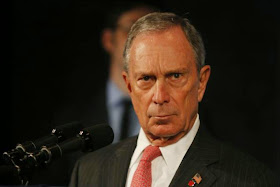 Last week, a threatening letter laced with the deadly chemical ricin was sent from Shreveport, Louisiana to New York City Mayor Michael Bloomberg as a response to the mayor's outspoken support for stricter gun control laws.  Two identical letters, also containing the lethal substance, were addressed to both President Barack Obama and the head of the Washington D.C. lobbying group, Mayors Against Illegal Guns, which is managed and funded by Bloomberg himself.

The contents of the letters are clearly the work of a right-wing gun nut and read as follows:


"You will have to kill me and my family before you get my guns. Anyone wants to come to my house will get shot in the face. The right to bear arms is my constitutional, god-given right and I will exercise that right till the day I die. What's in this letter is nothing compared to what I've got planned for you."

Despite lethally targeting civilians and non-military officials far from any active battlefield, no one is referring to these acts as terrorism.  Not the press, not political pundits, not the intended victims.  No one.

In fact, Bloomberg himself was nonplussed by the whole ordeal, telling reporters on Thursday May 30, "I'm not angry. There are people who I would argue do things that may be irrational, do things that are wrong, but it's a very complex world out there and we just have to deal with that."

Yes, Mike, it is a very complex world.

This world is so complex, in fact, that an easily identifiable act of terrorism isn't considered terrorism for one simple reason: it probably wasn't committed by a Muslim, but rather by some white guy in the South.

Clearly, while white guys who send murderous mail are merely acting irrationally and doing something wrong, potential violence by members of the Muslim faith present a singular threat to our civilized society. So much so, in fact, that Michael Bloomberg himself believes our own laws and the bedrock of that very society are not good enough to defend against such a scourge to humanity.

Last month, following the horrific Boston Marathon bombing, Bloomberg declared that the American obsession with privacy, civil rights and basic freedoms were antiquated and trite when compared to the dire threat posed by hypothetical barbarian hordes of 'Islamists.'

At a press conference at the Lower Manhattan Security Initiative, Bloomberg said, "The people who are worried about privacy have a legitimate worry. But we live in a complex world where you're going to have to have a level of security greater than you did back in the olden days, if you will. And our laws and our interpretation of the Constitution, I think, have to change."

Yes, how complex it is.

So complex that, although a 2010 study by Duke University and the University of North Carolina found that Islamic terrorism accounted for only six percent of all terrorist attacks in the United States between 1980 and 2005 while a 2012 analysis by the Center for American Progress reported that a whopping "[f]ifty-six percent of domestic terrorist attacks and plots in the U.S. since 1995 have been perpetrated by right-wing extremists," Michael Bloomberg has made it his duty to illegally spy on and harass Muslim communities in the New York Metro area.

Bloomberg has presided over a massive, illegal covert domestic surveillance and ethno-religious profiling program that have targeted, alienated and traumatized Muslims throughout the Northeast, despite the fact that, following the September 11, 2001 attacks, more Americans have been killed in right-wing terrorist plots than by Islamic terrorists.

"The program has stifled speech, communal life and religious practice and criminalized a broad segment of American Muslims," Arastu added, "The isolationism that comes with being a 'spied on' community means that American Muslims are getting a fundamentally inferior opportunity to exercise their constitutional rights."

But, for Mayor Mike, just because a white guy tries to kill you via the postal service doesn't mean white people in general deserve to be spied on, rounded up, marginalized, and profiled.  Keep calm and carry on, he says.  These things happen.

This morning, on Chris Jansing's MSNBC show, USA Today Washington Bureau Chief Susan Page said it was "probably not fair to taint the entire gun rights movement with the actions of this disturbing letter because there is a serious debate and two sides to it when it comes to the issue of guns."  Jansing agreed. "Yeah, and it's unfortunate that, for a few, it comes to this," she said.

Last year, Bloomberg defended his Muslim surveillance program, claiming, "Everything the NYPD has done is legal, it is appropriate, it is constitutional," and, unsurprisingly, by invoking that sacred strawman: 9/11. "We have not forgotten the lesson of that terrible day on 9/11," he insisted, sanctimoniously adding, "We have to keep this country safe...Remind yourself when you turn out the light tonight."

Bloomberg's insistence that, "We don't target individuals based on race or religion. We follow leads," is fascinating because, just six months after he said this, an Associated Press report on court testimony by the NYPD stated, "In more than six years of spying on Muslim neighborhoods, eavesdropping on conversations and cataloguing mosques, the New York Police Department's secret Demographics Unit never generated a lead or triggered a terrorism investigation."

But Bloomberg's targeting of Muslims isn't his only method of rooting out the evil that lurks in the hearts of brown men.

A month ago, the billionaire mayor defended his racist Stop-and-Frisk policy by invoking - what else? - the ever-looming conversation-ender: the constant scourge and fear of terrorism. "Look at what's happened in Boston," he said. "Remember what happened here on 9/11. Remember all of those who've been killed by gun violence and the families they left behind."

Again he even claimed that our own laws and efforts not to discriminate against certain communities are making us less safe. "God forbid terrorists succeed in striking our city because of a politically driven law that undermines the N.Y.P.D.’s intelligence gathering efforts," he said.

The editors of the New York Times were unmoved by Bloomberg's fear-mongering defense of racial profiling.  "Mayor Michael Bloomberg trotted out shopworn, discredited arguments this week," they wrote, "while defending the constitutionally suspect police program under which hundreds of thousands of innocent New Yorkers have been detained and questioned on the streets every year."

They note, "[G]uns were seized in only 0.15 percent of all stops. In addition, only 5.4 percent of all stops resulted in an arrest, and about 6 percent led to a summons. This means that in nearly 90 percent of cases, the citizens who were stopped were doing nothing illegal. In some cases, prosecutors declined to automatically prosecute arrests made in connection with the program because they knew that the stops were illegal."

In 2011, 84 percent of all those stopped under the NYPD's Stop-and-Frisk rampage where black and Hispanic, despite respectively representing 23 and 29 percent of New York City’s total population.  Similar to its monitoring of Muslims, the NYPD's own data has shown that the Stop-and-Frisk program has done little to reduce shootings in the city.

Nevertheless, Bloomberg has defended discrimination and been unrepentant in his support for the program.  "Nobody should ask [NYC Police Commissioner] Ray Kelly to apologize — he's not going to and neither am I," Bloomberg said last year, adding, "I think it's fair to say that stop-question-and-frisk has been an essential part of the NYPD's work."

For his part, Kelly suggests that those targeted by discriminatory policies should acquiesce to the authoritarian abrogation of their own civil and constitutional rights.  "The best thing for a person to do when being stopped is cooperate," Kelly said during a radio interview last August. "Accept it as a fact of urban life."

Under Michael Bloomberg's reign, minority communities have been collectively punished for the criminal actions of a few.  In his complex world, blacks and Latinos are all potential gun-toting killers, while all Muslims are jihadists-in-training.  Yet, an actual gun-toting lunatic who actually tries to murder Bloomberg is an anomaly, an aberration, nothing to be concerned with. Simply something "we just have to deal with."

But terrorism?  No, never.  Not if the perpetrator is white and not Muslim.

Glenn Greenwald, a former constitutional lawyer and currently a columnist for The Guardian, has been addressing this double standard for years.  "Terrorism," he writes, "is simultaneously the single most meaningless and most manipulated word in the American political lexicon. The term now has virtually nothing to do with the act itself and everything to do with the identity of the actor, especially his or her religious identity. It has really come to mean: 'a Muslim who fights against or even expresses hostility towards the United States, Israel and their allies.'"

So while the NYPD continues to terrorize minority communities and the FBI continues to foil phony Muslim terror plots that it itself devises, plans and funds, rest assured that all the well-armed and well-represented white folks in our noble nation will continue to live free from suspicion, scrutiny, and surveillance no matter how much postal poison they send and mass shootings they carry out.

Maybe it's not complex after all, maybe it's just complexion.

Remember that when you turn off the light tonight.


This article was featured in Issue 75 (June-July 2013) of ColdType and crossposted at both ConsortiumNews and Alternet.

June 28, 2013 - Speaking this morning on a local radio station, Bloomberg said some truly remarkable things.  Denouncing two City Council-passed bills that would rein in his racist Stop-and-Frisk policies, the mayor demonstrated he either has no grasp on reality, willfully ignorant, incapable of reading statistics, or simply enjoys lying into a microphone.

"The racial profiling bill is just so unworkable," he said. "Nobody racially profiles."

Bloomberg continued, "It's society's job to make sure that no one group is disproportionately represented as potential perpetrators."  Legislation, oversight, and regulation could also do that job, of course.

In order to prove what an arrogant Fascist he really is, Bloomberg concluded, "I think we disproportionately stop whites too much and minorities too little."