Troll and Response: A Follow-Up 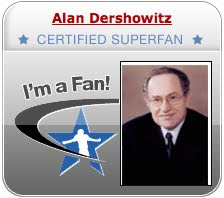 In response to my recent article1 about Alan Dershowitz's continued warmongering and lying about the legality (and morality) of an unprovoked first-strike on Iran by Israel, an internet troll often identifying himself as "Hamid" has posted identical comments on a number of websites where my article appeared, including Foreign Policy Journal2 and Media With Conscience3.

Though the comments themselves are quite unimpressive, I am flattered that my writing is deemed troll-worthy by Zionist apologists and Dershowitz defenders. Hilariously, at one point, the troll's overzealousness betrayed his own manufactured authenticity. In response to a comment by Foreign Policy Journal editor Jeremy Hammond, the troll posted three identical comments in quick succession, using three different generic Iranian names: 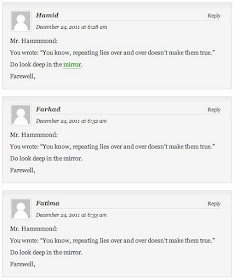 Not one to let silly nonsense go unaddressed (though I really should), I replied to "Hamid" and will, for posterity, post both the original troll comments and my response below. I have left "Hamid"'s comments exactly as they appeared on Media With Conscience, where I first read them. My own comment, first posted at MWC, has been edited ever so slightly for clarity and to more attractively embed source links.

The Warped Morality of a Warmonger:
Why Alan Dershowitz is Wrong on Israel's 'Rights'

"All of us have heard this term 'preventive war' since the earliest days of Hitler...A preventive war, to my mind, is an impossibility today. How could you have one if one of its features would be several cities lying in ruins, several cities where many, many thousands of people would be dead and injured and mangled, the transportation systems destroyed, sanitation implements and systems all gone? That isn't preventive war; that is war.

I don't believe there is such a thing; and, frankly, I wouldn't even listen to anyone seriously that came in and talked about such a thing." 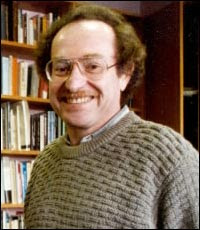 Renowned torture enthusiast and perennial Israel apologist Alan Dershowitz is in Tel Aviv this week attending an annual business conference sponsored by Globes and, as usual, has been busy equivocating for Israeli espionage, defending war criminals, and warmongering about Iran.

During a speech he delivered on Sunday December 11, Dershowitz opined, "Israel has the right morally and legally to strike Iran just as it did on [the Osirak nuclear facility] in Iraq in 1981."

This is not a new line for the famous attorney who has worked tirelessly to acquit both aspiring and successful murderers and war criminals and defend billionaires who commit - and millionaires who cover-up - child rape. In April 2010, Dershowitz wrote, "I am asserting, in unqualified terms, that Israel has an absolute right -- legally, morally, politically -- to take such an action if it deems it necessary to protect its citizens from a threatened nuclear attack." Even as far back as 2005, he told The Jerusalem Post, "Legally and morally both Israel and the United States would have the right to launch preemptive strikes against Iran’s nuclear program. Recall that leading Iranian mullahs have indicated that Iran would use its nuclear capacity to kill three million Jews. I also believe that targeted assassinations of criminals who are illegally building weapons of mass destruction, can, under certain circumstances, be justified morally. I think the legal case would be much harder to make." 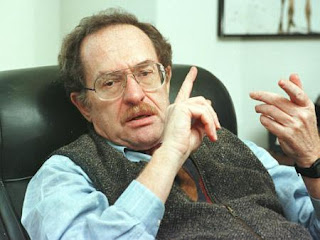 Like everything else The Dersh says, his statements are clearly out of step with the basic tenets of international law and, unsurprisingly, ignore both historical facts and current reality in order to draw his despicable and dubious conclusions. To understand Dershowitz's warped concepts of morality, one can simply read his copious justifications for the murder of civilians, as long as they're Arabs and/or Muslims.

First of all, the premise of Dershowitz's appalling argument regarding an Israeli attack is the assumption that Iran is, in fact, hellbent on building nuclear weapons and threatening Israel with genocidal annihilation. Of course, neither claim is true. Both the IAEA and the United States government (after years of covert operations and aerial surveillance) continue to agree that Iran does not have an active nuclear weapons program. In early 2011, Director of National Intelligence James Clapper told both houses of Congress, "We continue to assess Iran is keeping open the option to develop nuclear weapons in part by developing various nuclear capabilities that better position it to produce such weapons, should it choose to do so. We do not know, however, if Iran will eventually decide to build nuclear weapons." Dershowitz's insistence that the summary execution of Iranian scientists can be "justified morally" demonstrates the depths of his depravity.

Furthermore, so-called "preemptive" military attacks are illegal and explicitly forbidden by Chapter I, Article 2.4 of the United Nations Charter. The UN Charter also makes clear that it recognizes the "inherent right of individual or collective self-defence if an armed attack occurs against a Member of the United Nations." (Chapter VII, Article 51) Note that the Charter specifies that an aggressive, military response is allowed only "if an armed attack occurs...," which undoubtedly rules out "preemptive," "precautionary," or "preventative" military action of one State against another. Dershowitz conveniently ignores this clear fact.