Balfour and After:
Discussing the Declaration on NPR 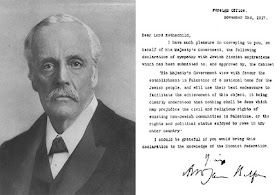 Jonathan Schneer, an expert in British history and author of a new book about the Balfour Declaration, was the featured guest on today's Leonard Lopate Show on NPR. It was a very interesting and wide-ranging discussion that lasted about 30 minutes.

November 2nd marked the 93rd anniversary of the Balfour Declaration, the statement that put imperial support behind the aspirations of a small group of British Zionists in 1917. But, while the British were giving Jews a mandate to settle in Palestine, Prime Minister Lloyd George was secretly promising the land to the Ottoman Empire and some members of his government were simultaneously supporting the rise of Pan-Arabism. In his new book, The Balfour Declaration: The Origins of the Arab-Israeli Conflict, Jonathan Schneer, a specialist in modern British history at Georgia Tech, explores the complicated history behind the document.

Schneer says that the British government believed that issuing the Balfour Declaration would help them win the ongoing World War. He continues,

Essentially, the leader of British Zionism who was a Russian chemist named Chaim Weitzmann, who later becomes the first president of Israel, persuaded the British governing elite that Jews represented a very powerful, if subterranean, force in world affairs. And, having persuaded them of that, he persuaded them, as well, that most Jews were Zionists and he also warned them that Germany was courting Zionists, and therefore the British concluded, as Weitzmann wanted them to conclude, that they should make an offer to Zionists which would win their support and win it for the British in World War I, and so they promised them Palestine in the Balfour Declaration.

Schneer also points out early on in the discussion that "Weitzmann's genius was to play upon preexisting anti-Semitic stereotypes held by some among the British governing elite in order to get them to make the promise," continuing that Weitzmann "let them think that Jews would wield important influence in the United States and helped persuade President Wilson that American should enter the war and helped to finance it, and also that Jews were very important in Russia and would keep Russia in the war if they could be bribed with the promise of Palestine."

Later on in the discussion, after Lopate reads the full text of the Balfour Declaration, which was actually crafted in a London hotel by a group of Zionists affiliated with Weitzmann, Schneer points out that the declaration makes note of attempting to establish "a" national home for the Jewish people, not "the" national home, saying "that's important: home as opposed to homeland. In other words, there is no indication in the Balfour Declaration that the Zionists will create a Jewish state. It's a home, not a state. In fact, the Zionists always wanted a state, but they knew that to say so at this point would have offended more people than it would have won over and so they, very carefully, didn't say that." 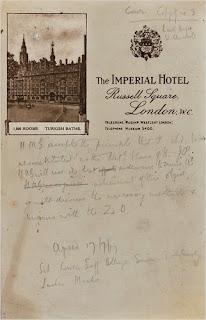 Schneer, in discussing the Palestinian reaction to the British declaration, namely the strange proviso that establishing "a national home for the Jewish people" would in no way "prejudice the civil and religious rights of existing non-Jewish communities in Palestine," mentions that Jews accounted for less that 10% of the population of Palestine in 1914 (based on expert studies by Justin McCarthy, the Jewish population was actually only 7.585% of Palestine; 60,000 Jews lived alongside more than 730,000 Arabs). As a result, Schneer says, "it did seem backward to the non-Jewish people of Palestine that their rights were being protected from the tiny minority."

Furthermore, Schneer notes, of the 300,000 Jews (out of a total population of 45 million) living in Great Britain in 1914, only about 8,000 belonged to Zionist organizations. Another, even smaller minority of British Jews were actively anti-Zionist. "They called themselves assimilationists, they argued that Jews share a belief system, but that they do not constitute a distinct nationality," Scheer said. "And, if I may, they said, 'Jews should practice their belief system wherever they live and they should assimilate into the countries in which they live.'"

Lopate then asks the most important question of all: "So why was it that a minority group of Zionist Jews eventually prevailed over the aspirations of the majority of Jews in Britain who were opposed to Zionism?"

After Schneer states his belief that the majority of British Jews at the time were far more indifferent and apathetic to Zionism than actively opposed to it, he offers the following analysis:

World War I makes Zionism practical politics for the first time because the British are convinced by Weitzmann that they need to win over Jewish support...If you're asking whether a Prime Minister like Lloyd George can be in favor of more than one thing at a time, the answer is yes...Lloyd George would do and say practically anything in order to win the [First World] War for Britain and for the British Empire, and so he was simultaneously exploring a separate peace with the Turks, he was exploring supporting the Arabs creating an independent regime in the Middle East, he was supporting the Balfour Declaration...In the end, they betrayed the Arabs for sure.

The Balfour Declaration is enormously important. Although, I have to underline the point that it could have been sidetracked by history, that is, if the Turks had accepted Lloyd George's peace ideas, we wouldn't pay any attention to the Balfour Declaration. Everything would be different. But that's not what happened. What happened was that the Balfour Declaration was issued and the British won the war and they established a Mandate in Palestine and they allowed Jews to emigrate into Palestine in much greater numbers than ever before. Did they satisfy the Jews in terms of immigration in the interwar period? The answer is no, they did not allow enough Jews to come in as far as the Zionists were concerned, but nor did they satisfy Arabs...The fact is this, I think, [British] conduct during the war ensured that there would be conflict after that war. Because neither the Zionists nor the Arabs remained ignorant of all the deceit and all the betrayal that the British had practiced, they remained ignorant of some of it. But the result was that neither did trust one another, nor did they ever trust the British, and so the situation degenerated into the war of each against all that we know all too well now.