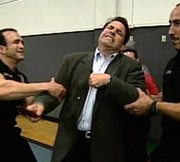 My latest article regarding the double standards of the US' new unilateral sanctions against Iran was reposted on Indymedia UK, among other sites. In response, a comment was posted which, though a bit condescending in its tone, raised some important issues that I subsequently addressed in a comment of my own. What followed was a civil back-and-forth between the commenter, alka, and myself that I believe contains a great deal of valuable information.

The complete exchange is reposted below.

Thank you for your close reading of the article and for your comments. Please allow me to address your questions:

1. The notion that the UNSC resolutions regarding Iran's nuclear program is illegal is not based on my personal feelings about Iran or selective readings of international law. It is simply a matter of fact. No document whatsoever, including the UN Charter, the articles of the NPT, cooperation agreements between the UN and the IAEA, the Safeguards Agreement between Iran and the IAEA, and the IAEA Statute itself, authorizes the UN Security Council to enforce Iran's IAEA Safeguards Agreement. Remember, the IAEA is its own entity, not under the auspices or legal framework of the United Nations. It has a legal relationship with the UN, but is not an arm of the organization.

However, the IAEA is authorized (perhaps even required) to "report" certain matters to the Security Council. The purpose of this authorization has nothing to do with UNSC-backed enforcement of IAEA Safeguards; rather, it is to inform the UNSC that, in the opinion of the IAEA, there may be reason to believe a country's (in this case, Iran's) nuclear program is, in the words of Article 39 of the UN Charter, a "threat to the peace, breach of the peace, or act of aggression." It follows that, if the Security Council determines that a "threat...etc" exists, it may then, legally, take action against Iran such as adopting resolutions and implementing non-binding "provisional measures" (Article 40), authorize and implement non-military action against Iran (Article 41) if the provisional measures do not yield results, and even authorize military action "to maintain or restore international peace and security" (Article 42) if the previous measures prove inadequate.

The UNSC has never determined Iran to be a "threat to peace," has never found Iran to be in "breach of peace," and has never accused Iran any "act of aggression." The very first resolution regarding Iran's nuclear program (1696) was enacted ONLY "under Article 40 of Chapter VII of the Charter of the United Nations," thereby skipping Article 39 altogether. Article 39 is never even mentioned in the resolution (or any subsequent resolution). In fact, the following resolutions have all simply been "authorized" under Article 41 as "giving effect" to the previous resolutions, but never cite Article 40 in their own right and never once - NEVER ONCE - reference Article 39, which is required for any actions taken after it to be legitimate.

As such, none of the resolutions are, in fact, legally binding on Iran since they all lack the vital element - initial authorization via Article 39 of the UN Charter.