World Cup Domination & Entertaining the Empire:
One Aim Changes Everything 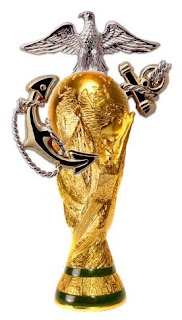 "Our situation is like a football match. The superpower countries are the players, and we are just the ball to be kicked around."

The Great Game is indeed alive and kicking. This summer's World Cup tournament is providing yet another way for the United States to project its power across the globe, though not as a result of the American national team's action on the pitch.

Rather, this year, the subjugation will be televised.

While the presence of U.S. Marine Corps recruiting advertisements at each and every commercial break is perhaps mundane at this point, far more surprising is the frequent, scripted announcement by various British and Scottish play-by-play commentators on ESPN that "we'd like to welcome our men and women in uniform, serving in over 175 countries and territories, watching today's 2010 FIFA World Cup match on AFN, the American Forces Network." Other various comments have also been made about how proud the ESPN color men are of the American troops, what a fine job they are doing, and that the commentators are "glad to have them with us" and "sincerely hope [the soldiers] are enjoying the broadcast."

Beyond the surreal fact that announcers from the UK, like Adrian Healey, Martin Tyler, and Ian Darke, are eagerly praising American soldiers and sailors during the broadcast as their own ("our brave men and women..."), how can the rest be said with a straight face or without the most shameful sense of hypocrisy? That there are US troops stationed in over 175 countries around the world is a stunning fact in itself - although well-known by now if you've been paying attention at all for the past decade. At this point, there's probably an 'App' for that.


But again, this is the World Cup, and overseas ESPN announcers are lauding the attention, entertainment, and service of U.S. world domination forces, a military that has invaded, occupied, overthrown, exploited, bombed, blasted, burned, and reduced to rubble many - if not most - of the countries that now vie for the cup of all cups. The same Armed Force that now gets to enjoy the harmonious excitement of the 'beautiful game' in all its High Def glory has stoked tension and supported instability (to say the least) in countries as Greece (in 1947-49, over 500 U.S. armed forces military advisers sent to administer hundreds of millions of dollars in their civil war), Brazil (in 1964, U.S. backs a coup d'etat to overthrow popular president João Goulart), Chile (in 1973, U.S.-supported military coup overthrows - and murders - democratically-elected president Salvador Allende and brings dictatorship of Pinochet to power), Uruguay (in 1973, U.S.-backed coup brings military dictatorship to power), Argentina (in 1976, military junta deposes government of Isabel Perón with U.S. support), Honduras (besides past interventions in 1905, 1907, 1911, and 1943, in 1983 over 1000 troops and National Guard members were deployed to help the Contra fight against Nicaragua, not to mention the U.S. support for last year's coup), Slovenia and Serbia (in 1992-6, U.S. Navy joins in a naval blockade of Yugoslavia in Adriatic waters while in 1999, U.S. participated in months of air bombing and cruise missile strikes in Kosovo 'war').

Furthermore, Denmark, Greece, the Netherlands, France, Portugal, Slovenia, Slovakia, Switzerland, Australia, New Zealand, Algeria, Cameroon, Côte d'Ivoire, Ghana, Nigeria, South Africa, Argentina, Brazil, Chile, Honduras, Mexico, Paraguay, and Uruguay all suffer the presence of at least a few American soldiers who are officially stationed there; some of these countries are forced to host 400-800 US troops. All told, there are about 78,000 American military personnel in Europe, along with approximately 47,240 in East Asia and the Pacific, 3,360 in North Africa, the Near East, and South Asia (obviously not including the 92,000 troops in Iraq and about 100,000 in Afghanistan and Pakistan), 1,355 in sub-Saharan Africa, and an additional 1,940 in the Western Hemisphere outside the United States itself.

When broadcasting from the new Moses Mabhida Stadium in Durban on the east coast of South Africa, Scottish announcer Derek Rae has made sure to point out that "U.S. sailors and Marines are with us today...on AFN, the American Forces Network."

As of 2008, the U.S. Navy had over 90,000 sailors afloat in and around the United States and its satellite territories around the world. Another 18,280 are deployed in foreign waters, accompanied by over 4,300 Marines. There are about 10,500 Naval personnel stationed in East Asia and the Pacific alone.

Continuing, Rae states, "We'd like say hello to the crews of all the ships at sea. And we are just a stone's throw from the ocean ourselves, the Indian Ocean, in this case. Great to have you with us."

The island of Diego Garcia, located about 1,000 miles from the southern coasts of India and Sri Lanka in the Indian Ocean, is a British colony, part of the British Indian Ocean Territory, and serves as a massive U.S. military naval and airbase under an arrangement made in 1971 (for which the UK does not charge the U.S. any rent). The agreement led to 2,000 native islanders being forcibly evicted to the Seychelles and Mauritius. (Reportedly, the U.S. is "opposed to anyone other than military personnel and their employees living anywhere in the Chagos archipelago, asserting that security will be compromised." Since the U.S. has always had such an ironic sense of humor when it comes to unabashed ethnic cleansing - whether in the Americas, Palestine, or the Indian Ocean - it should come as no surprise that the island's military base was named "Camp Justice" until 2006.) Currently, about 50 British military staff are stationed on the island, with more than 3,200 U.S. personnel.

The Diego Garcia installation acts as a refueling and support station for the U.S. Navy and Air Force and is home of a U.S. naval prepositioning squadron (responsible for the readiness of naval vessels as part of the Military Sealift Command in the Indian Ocean). The aerial bombardment and invasions of both Afghanistan and Iraq were launched from the island. More recently, Diego Garcia is home to forward deployed U.S. guided missile nuclear submarines, in stark violation of the African Nuclear Weapons Free Zone Treaty, and has been used as a "black site" in the Bush administration's illegal extraordinary rendition program, a program protected and continued by Obama.

Earlier this year, the Scottish Sunday Herald revealed that "hundreds of powerful US 'bunker-buster' bombs" had been "shipped from California to the British island of Diego Garcia in the Indian Ocean in preparation for a possible attack on Iran." The cargo included "195 smart, guided, Blu-110 bombs and 192 massive 2000lb Blu-117 bombs," which are "used for blasting hardened or underground structures" such as Iran's fortified nuclear energy facilities. Dan Plesch, director of the Centre for International Studies and Diplomacy at the University of London and co-author of a recent study on US preparations for an attack on Iran, has stated that the United States is "gearing up totally for the destruction of Iran...US bombers are ready today to destroy 10,000 targets in Iran in a few hours." 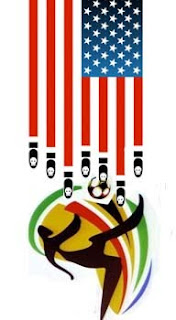 The only country in this year's World Cup proceedings without any substantial or even token United States military presence is - surprise - North Korea. Yet even this might change if Obama gets his way. That would put American troops in every single one of the 32 countries currently competing in South Africa, along with over 140 others.

A press release distributed by U.S. Africa Command (US AFRICOM) this week reports, "Through the cooperation of a host of international television licensees, the American Forces Network Broadcast Center (AFN-BC) has been granted permission by the Fédération Internationale de Football Association (FIFA) to distribute the full complement of matches of the 2010 FIFA World Cup South Africa."

A recent article in Stars and Stripes, quotes Lt. Col. Steve Berger, an intelligence planner with U.S. Army Africa stationed in Vicenza, Italy, as saying, "It’s really great for the soldiers to see, especially for an emerging sport in the U.S.” (So that they can get a glimpse of the kinds of people they'll be ordered to conquer and kill next?) Even more exciting is the fact that, "Because AFN doesn’t pay for programming, it was important that it receive the rights to the World Cup for free, AFN chief of affiliate relations Larry Sichter said." Apparently, the military can invade your country and station troops there indefinitely, but it sure as hell won't pay for television broadcasting! Especially not with the $531 billion allocated this fiscal year for U.S. military spending (a total which is expected to rise by $18 billion next year along with an additional $272 billion for the ongoing occupation of Iraq, the escalation in Afghanistan, the illegal predator drone bombings in Pakistan, and rebuilding and updating a nuclear arsenal in clear violation of the requirements of the NPT). The U.S. armed forces just can't spare a square.

Perhaps FIFA had no choice but to comply with the requests of the U.S. military for fear of having their offices occupied or blown to pieces. What a relief a deal was struck! How global! How peaceful! How imperial! How obvious, unsurprising, and embarrassing.

"Having the most-watched sports event on the planet play out on AFN is a real feather in our cap," notes Jeff White, Executive Director of AFN-BC, in the text of the military press release filed from Riverdale, CA via Stuttgart, Germany. "But more importantly," White continues, "we'll be able to deliver the entire compliment [sic] of matches to the side that means the most -- our brave men and women in uniform serving their country overseas and in harm's way. It doesn't get any better than this."

That, out of the planetary pride, representation, and unification that the World Cup is supposed to be all about, the U.S. military would be "the side that means the most" is in itself upsetting - but hey, it's a military press release and the guy's name is White after all.

But White is wholly wrong about "it" not getting "any better than this." There is a very simple way for things to be much, much better. If the U.S. reduced its dominating and destructive presence and aggressive involvement around the world and dismantled the hundreds of foreign installations and imperial infrastructure that keep the rest of the world in submission and under American occupation, these "brave men and women in uniform" could - and should - be watching these 64 soccer games from the comfort of their own homes in the United States, on the couch with their families.

For the sake of the entire world, it truly wouldn't get any better than that.